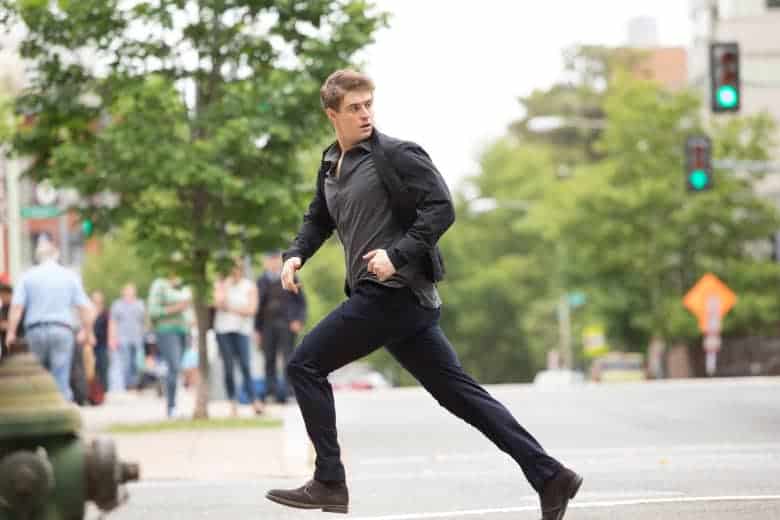 In the new drama series CONDOR, which follows the theme of the film “Three Days Of The Condor,” an intelligence analyst finds himself in the crosshairs of a vicious government conspiracy that leaves him running for his life and with no one to trust. When everyone you thought you knew is suddenly dead or intent on killing you, there leaves virtually no one to turn to. Fortunately, there is a good reason this particular analyst was hired by the government in the first place — he can out-think them and outsmart them — if he can find a way to keep moving so that he has time to strategize a way to fight back and clear his name. In an exclusive interview, star Max Irons previewed his tantalizing role in CONDOR.

What attracted you to working on CONDOR?
MAX: So many things. It’s always fortunate when the subject matter is something that you’re personally interested in. But I think what interested me out of the gate was a couple things. I think we — in society — we turn away away from things often. For example, to have cheap gas in our cars, to have high quality protein available at all times, or cheap, affordable clothing. You turn away from certain truths to have national security. We choose to look away from the true cost. We choose to look away from the fact that our cell phones aren’t quite as secure as we always thought. Joe is having to realize what he’s going to do and what he accepts and what he doesn’t. Also Joe is a young, somewhat idealistic guy who recognizes there are far reaching, deep-rooted systemic problems in our society and also in some of our government bodies, operating internally, but he doesn’t quite know how best how to deal with those problems. Whether to trust his instinct and smash them, or work within the system as best you can and hopefully rebuild, or whether that would come at the cost of the people you were trying to protect. Or, succumb to the system knowing that it’s larger, than can be taken on, and to succumb to it and work from within to make a small change.

Joe’s in a unique position. He’s created a tool that, of course gets used in the wrong way and it results in a lot of death. But but at the same time he’s got to then find a way to key the remedy that or utilize it in a better manner.
MAX: It’s sort of out of his hands. He was completely unaware of how it was being used. And I don’t know if he could circumvent it. You know, there’s a line in episode one where somebody says, “what did you think happened to this stuff once we make it?” And I don’t think he was willing to look. Like what I was saying earlier about where our gasoline comes from, I think he was slightly unwilling to look at the truth for fear that he was complicit in a system he didn’t stand by.

Is Joe going to get it to a point where he’s no longer operating on the defense and go on the offense?
MAX: Yes. He does. There is an awful lot of running and hiding, and crawling around in the meantime. But he does get there.

He also has a love interest in the midst of all of it, and her situation looks dubious like she may not live very long. Should we be worried about her?
MAX: I think you’ll have to wait and see. I don’t want to give anything away.

It a beautiful love story they started off with and is is an interesting take to have that explored the way it is.
MAX: [Laughs] I don’t know that “beautiful love story” is quite how I would describe it. It is a unique situation. Yeah. I like that device. I think it allows Joe to — well, you’ve got to feel sorry for these guys. They can’t actually discuss the nature of their job and how conflicted they may or may not feel. They can’t even discuss it with their family members. I mean, how hard must that be. And then Kathy Hale [Katherine Cunningham], in spite of the odd circumstances in which they meet is the first relationship in which he can be wholly himself. And I think you see Joe releasing the pressure valve there, which is nice to play.

Joe is also trying to reconnect with the William Hurt’s character of somebody he’s really close to, obviously. What’s that relationship going to be like as they try to work through this conspiracy?
MAX: That’s difficult, really. Joe is fighting an enemy that you can’t see. These guys don’t wear name tags. These guys don’t identify themselves when they knock on the door. These guys are hiding in the devices in your pocket, in satellites in the sky. Joe can’t trust anybody. And Bob — William Hurt’s character — is a taskmaster at the CIA.

So you can’t quite trust him fully either.
MAX: Yeah, you know, I don’t want to give anything away, but . . . [Laughs]

The body count is clearly very high, initially. Does it remain at that pace for the entire duration of the series?
MAX: No. It slows down. But I … again, I don’t want to give anything away. It’s safe to say there’s no way to keep up that pace of loss of life.

Another relationship they established quickly was the one with Kristoffer Polaha’s character Sam, and that is established as a close friendship right away.
MAX: Yeah, absolutely. Kris’ character, for him, the “ends justify the means.” So I think it’s nice that you see that. There’s a little bit of sparring there. This is what I love about the show. There’s no preaching and I think all arguments, all angles, are presented. And Kris’ character is a great example of that.

It seems like the audience is going to be conflicted in trying to figure who to root for.
MAX: [Laughs] That’s because there’s only me! Joe can’t trust anybody.

At a time when there are a lot of political thrillers in television, CONDOR has a lot of momentum to it which means you are invested in the characters very, very quickly even though many do not last long. Was it that way for you? Were you attached to them, or did too many come and go too quickly?
MAX: When I watched episode one — I’m hiding behind the sheet when I’m watching these things — I was gripped, and because Brendan [Fraser] and I don’t really cross paths — to see that whole side of it come through, it’s great. It had me gripped from, when I first read the script.

To see if Joe can find anyone to trust when it seems like everyone is out to betray him while there is a target on his back, be sure to tune in for the premiere of CONDOR on Wednesday, June 6th on Audience Network available on DirecTV. To see special clips from the show and get further information throughout the season, you can follow the show on Twitter @CondorATT.