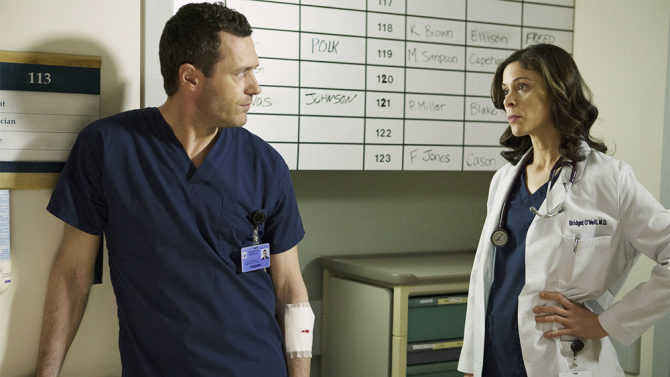 USA has a new drama from Matt Nix (the creator of Burn Notice) called COMPLICATIONS. It is the story of Dr. John Ellison (Jason O’Mara, star of Terra Nova and several other short-lived series) and his terrible, horrible, no good, very bad day. Well, it starts off as roughly a single day, but it quickly spirals into major ramifications for his entire life and he may be spending a long, long time trying to get things back on track. Sounds a bit like Nix’s previous project, no?

To be fair, COMPLICATIONS doesn’t feel much like Burn Notice, despite that central similarity. Both men are good people whom bad things happen to and who have major skills they use to help people, but they are also quite different. While Michael Weston was an emotionally challenged spy, John Ellison runs much, much hotter, his emotions boiling over, and he works in a hospital alongside a team, not operating solo for-hire in his apartment. Plus, there’s no chain-smoking mother in sight.

John is a good-hearted man, the type who will use his medical skills to try to heal a squirrel his dog gets a hold of. When he comes across a drive-by shooting and intervenes perhaps a little more than he should, that’s when things get rocky. He is soon drawn into gang wars and neither his home nor his workplace are an escape from this.

But does John even want to escape it? Part of the pilot involves him discussing what’s going on with a shrink (Constance Zimmer, UnReal, House of Cards) and this is where we get some insight into who John is. Maybe he isn’t happy with the calm, normal life he’s been living; he definitely has some deeper issues to deal with, and these events help bring those to the surface. The only thing that seems certain right now is that John is unstable and unpredictable.

O’Mara doesn’t really play the protagonist as an overly sympathetic character. Because of his wild mood swings and erratic behavior, it’s hard to tell if he’s someone that deserves to be rooted for. Yes, he saves lives, but that’s his job. He certainly has compassion for his patients, but as he goes to greater lengths to do what he thinks is right in the moment, one begins to wonder if the ends justify the means. He is not trustworthy right now.

John is surrounded by enough of a supporting cast to keep the story going for awhile. There’s: John’s wife, Samantha (Beth Riesgraf, Leverage), whom he’s not exactly open with; his straight-laced co-worker, Dr. Bridget O’Neill (Lauren Stamile, Burn Notice), who probably would not participate in John’s madness if she knew what was going on; Gretchen Polk (Jessica Szohr, Gossip Girl), an abuse survivor (I assume) who believes justice trumps rules; Darius Bishop (Chris Chalk, The Newsroom), John’s link to the criminal element; and Dr. Quentin Harper (Ronreaco Lee, Survivor’s Remorse), whom I didn’t get a good read on in the pilot. This is a decent ensemble, and with various people being out of the loop right now, there will be fodder for conflict as they find out more of John’s secrets.

The thing is, though, I don’t know if I want to stick around to see it. The first hour of COMPLICATIONS is a hot mess, not told linearly, no grounded character to view the world through, and no compelling hook to stick around and see what it catches. USA has been moving away from formula and taking some bold chances. I won’t say COMPLICATIONS is boring in the way programs of the past have been on the network, but this is one experiment that is failing because of a lack of direction or anchor, at least out of the gate, and I didn’t find anything in this pilot that makes me want to give it a second chance.