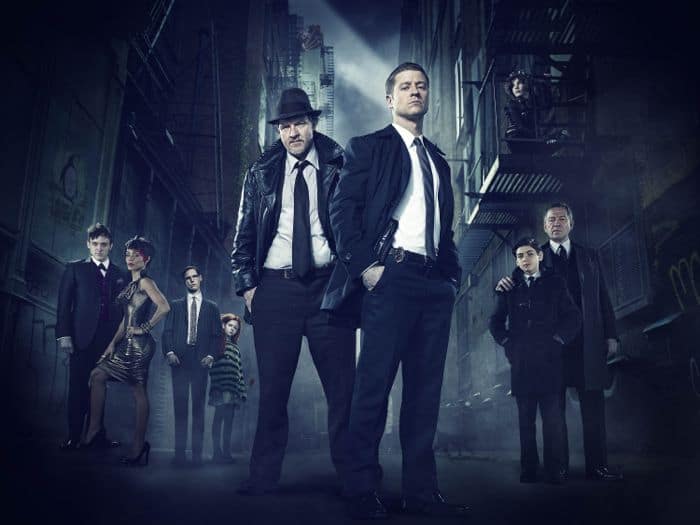 Get ready for a spectacular Saturday night at Comic-Con 2014, courtesy of Warner Bros. Television (WBTV) and DC Entertainment (DCE). For the first time ever at SDCC, WBTV and DCE will present a three-hour special event on Saturday night, July 26, designed specifically for DC Comics fans and featuring some of DC Comics’ greatest characters. Kicking off the exclusive evening is the world premiere public screening of the highly anticipated new drama series Gotham (the only screening of Gotham at this year’s Comic-Con), followed by a screening of the complete pilot of new action-drama The Flash, and exclusive video presentations from returning hit Arrow and new thriller Constantine. Cast members and producers from all four shows will make special appearances throughout the night.

Additional WBTV Comic-Con 2014 panels will be announced in the near future. For additional information about WBTV activities at Comic-Con, please follow us on Twitter at @warnerbrostv and join in the conversation by using hashtag #WBSDCC, or visit http://comiccon.thewb.com.

Before there was Batman, there was Gotham. The origin story of some of DC Comics greatest Super-Villains and vigilantes, this one hour drama follows Detective Jim Gordon’s rise to power in a dangerously corrupt city that would spawn iconic characters such as The Penguin, Catwoman, The Riddler and a young Bruce Wayne. Airing Mondays at 8/7c this fall on FOX, Gotham stars Ben McKenzie (Southland), Donal Logue (Vikings), Sean Pertwee (Elementary), Robin Lord Taylor (The Walking Dead), Erin Richards (Being Human), David Mazouz (Touch), Camren Bicondova, Zabryna Guevara (Burn Notice), Cory Michael Smith (Camp X-Ray), Victoria Cartagena (The Good Wife), Andrew Stewart-Jones (Person of Interest) and Jada Pinkett Smith (The Matrix films). Bruno Heller (The Mentalist, Rome) wrote the Gotham pilot, which was directed by Danny Cannon (Nikita). Heller, Cannon and John Stephens (Gossip Girl) are executive producers of the series, which is based on the characters from DC Comics and is a production of Warner Bros. Television. Become a fan on Facebook at www.facebook.com/GOTHAMonFOX, and follow the show on Twitter at @Gotham.

This lightning-paced super hero drama follows the high-speed adventures of the Fastest Man Alive. After an unexpected accident with a Particle Accelerator, police scientist and everyday guy Barry Allen finds himself suddenly charged with the ability to move at incredible speeds, which he uses to help the people of Central City. Premiering October 7 and airing Tuesdays at 8/7c on The CW, The Flash stars Grant Gustin (Arrow, Glee), Candice Patton (The Game), Rick Cosnett (The Vampire Diaries), Danielle Panabaker (Friday the 13th), Carlos Valdes, with Tom Cavanagh (Ed, Scrubs) and Jesse L. Martin (Law & Order). John Wesley Shipp (The Flash [1990]) guest stars. Greg Berlanti (Arrow, Green Lantern), Andrew Kreisberg (Arrow, Fringe) and DC Entertainment’s Chief Creative Officer Geoff Johns wrote The Flash pilot, which was directed by David Nutter (Arrow, Game of Thrones, Smallville). Berlanti, Kreisberg, Nutter and Sarah Schechter (upcoming Peter Pan feature film) are executive producers of The Flash, which is based upon the characters from DC Comics and is produced by Bonanza Productions, Inc. in association with Berlanti Productions and Warner Bros. Television. Become a fan of The Flash on Facebook at www.facebook.com/CWTheFlash, and follow the show on Twitter at @CW_TheFlash.

John Constantine is a man waging war against the forces of darkness — from both within himself and the outside world. An irreverent con-man and occult expert, he doesn’t come down on the side of either good or evil…but ultimately might be the only thing defending us against the dark forces from beyond. Premiering October 24, Constantine will air Fridays at 10/9c on NBC and stars Matt Ryan (The Tudors) as John Constantine, Charles Halford (True Detective) as Chas and Harold Perrineau (Lost) as Manny. Based on the characters from DC Comics and produced by Bonanza Productions Inc. in association with Warner Bros. Television, Constantine is executive produced by Daniel Cerone (Dexter, The Mentalist) and David S. Goyer (The Dark Knight trilogy). Neil Marshall (The Descent) directed the pilot from a teleplay by Cerone and story by Cerone & Goyer. Become a fan of Constantine at www.facebook.com/Constantine and follow the show on Twitter at @NBCConstantine.

After being gone for five years, during which time he suffered unimaginable ordeals, billionaire Oliver Queen returned home to Starling City with a mysterious agenda and a new set of skills that he uses in a war on crime in this hard-hitting action series. Returning for its third season October 8, Arrow airs Wednesdays at 8/7c on The CW. Starring Stephen Amell, Katie Cassidy, David Ramsey, Willa Holland, Emily Bett Rickards, Colton Haynes, with John Barrowman and Paul Blackthorne, Arrow was developed and is executive produced by Greg Berlanti, Marc Guggenheim and Andrew Kreisberg. Based upon the characters from DC Comics, Arrow is produced by Bonanza Productions Inc. in association with Berlanti Productions and Warner Bros. Television. Become a fan on Facebook at www.facebook.com/CWArrow, and follow the show on Twitter at @CW_Arrow.