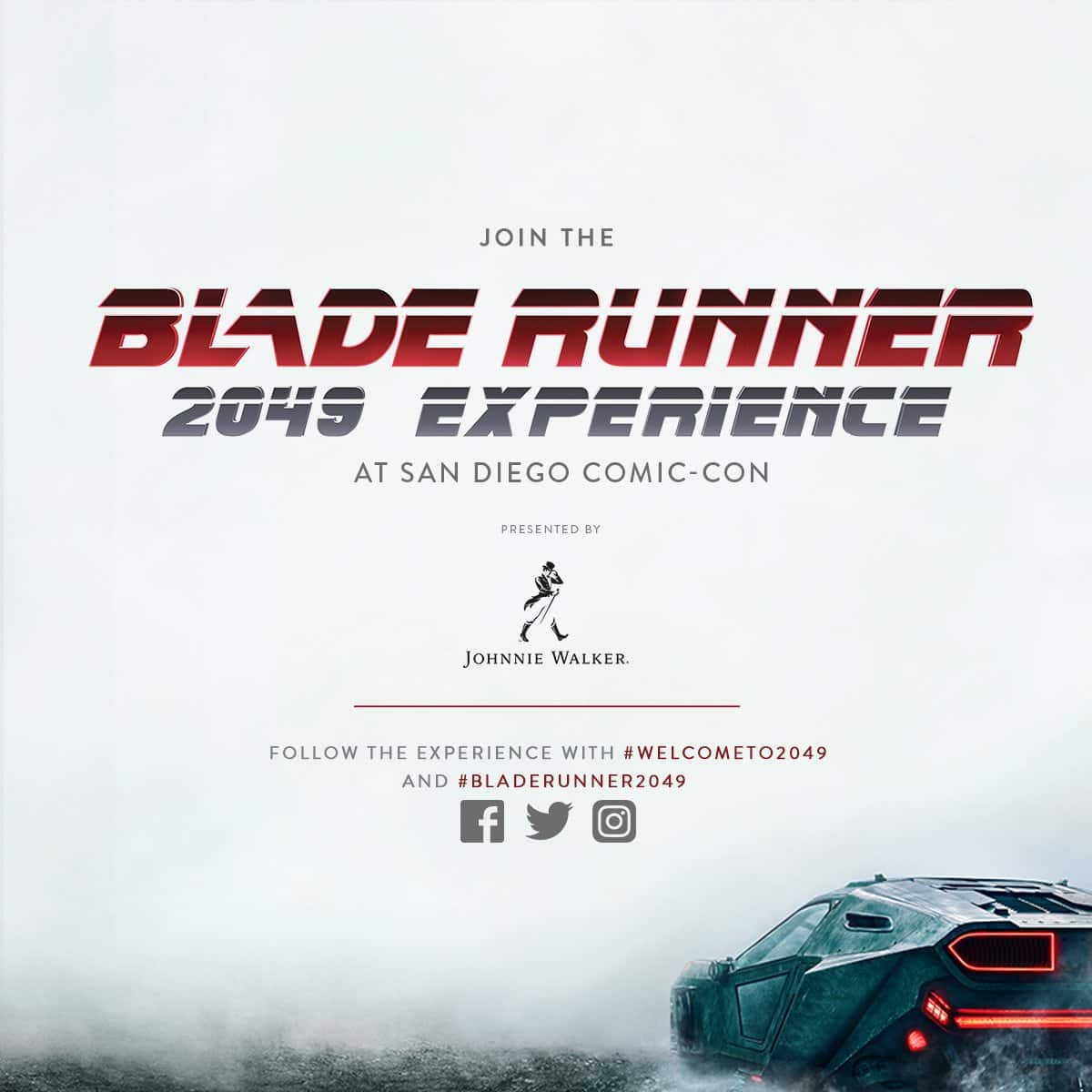 Fans who are eagerly anticipating the long-awaited “Blade Runner” sequel, “Blade Runner 2049,” will have a once-in-a-lifetime opportunity to step into the unique world of Alcon Entertainment’s new film, months before its October 6th theatrical release. Located in the heart of San Diego’s famed Gaslamp Quarter, the Blade Runner 2049 Experience will replicate the movie’s setting, complete with the unique sights, sounds and atmosphere of Los Angeles, circa 2049. Presented by Alcon Entertainment and Johnnie Walker, the activation will be open to the public over Comic-Con weekend—Thursday, July 20th, to Sunday, July 23rd. Everyone is welcome; you do not need a Comic-Con badge to enter.

Setting the tone, the experience begins as guests enter through a gallery of art from “Blade Runner 2049.” An Oculus VR experience will immerse visitors in the world of the film. But that is just the start: as the VR presentation ends, guests will walk into a neon-lit Los Angeles street scene, where they should be prepared to experience what our potential future holds, including impromptu tests to determine if they are humans…or replicants.

The actual Spinner from the new film will be on display, along with other vehicles featured in the film. Costumes worn by the stars of “Blade Runner 2049” will also be on display, and actors dressed in wardrobe from the film will be amongst the crowd, furthering the sense that guests have stepped into the Los Angeles of the future. There will also be giveaways for fans, along with other surprises.

In addition, for the first time, fans will get an exclusive peek of the limited-edition Johnnie Walker Black Label The Director’s Cut bottle, inspired by the original, elusive prop from the first film. Details on this limited-edition whiskey blend will be announced in the coming months. Guests 21 and over will also have the chance to enjoy a Johnnie Walker whisky tasting experience.

Thirty years after the events of the first film, a new blade runner, LAPD Officer K, unearths a long-buried secret that has the potential to plunge what’s left of society into chaos. K’s discovery leads him on a quest to find Rick Deckard, a former LAPD blade runner who has been missing for 30 years.

“Blade Runner 2049” was produced by Oscar nominees Andrew A. Kosove and Broderick Johnson (“The Blind Side”) and Bud Yorkin and Cynthia Yorkin. Ridley Scott, who directed the first “Blade Runner,” served as an executive producer, together with Tim Gamble, Frank Giustra, Yale Badick, Val Hill, and Bill Carraro.

Denis Villeneuve directed the film from a screenplay by Hampton Fancher and Michael Green, story by Fancher, based on characters from the novel Do Androids Dream of Electric Sheep by Philip K. Dick.

Opening on October 6, 2017, in 2D and 3D in select theatres and IMAX, “Blade Runner 2049” is a presentation of Alcon Entertainment and will be distributed domestically by Warner Bros. Pictures, a Warner Bros. Entertainment Company, and internationally by Sony Pictures Entertainment.