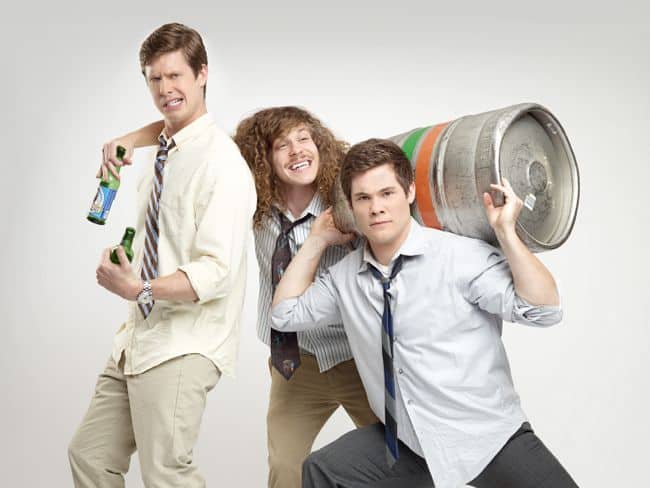 New Year, new comedy!  Dust off your 2012 hangover and ring in the New Year with COMEDY CENTRAL as the brand celebrates an unprecedented amount of new programming and toasts the return of hit series.  Make your resolutions and mark your calendars for all that’s to come in 2013 on COMEDY CENTRAL including: the season two premiere of “The Burn with Jeff Ross ” (January 8); the return of all-new episodes of “Workaholics” (January 16); the series premiere of the sketch comedy series from Nick Kroll , “ Kroll Show ” (January 16); the fifth season of “Tosh.0” (February 5); the series premiere of a new weekly topical series, “The Jeselnik Offensive” starring Anthony Jeselnik (February 19); the series premiere of the sketch/man-on-the-street hybrid

“To have even one show you know for sure will change the world is amazing, but to have eight that won’t is also noteworthy,” said Kent Alterman , Head of Original Programming and Production, COMEDY CENTRAL.

Following are descriptions of new series, specials and returning series premiering this season:

The infamous “Roastmaster General,” Jeff Ross, is back to take aim at the week’s hottest topics in season two of “The Burn with Jeff Ross .”  Ross and his panel of fellow comedians return to take on the week’s topics, Roast style – taking aim at public figures and current events.  Popular segments include “Friendly Fire,” in which Ross visits his friends for some friendly put-downs; last season’s targets included John Stamos , Jimmy Kimmel , and Sarah Silverman.  In “Public Enemies,” Jeff heads out on the tricked out Segway, dubbed the “Roaster Coaster,” to roast public menaces; and in the cringe-inducing “Too Soon,” he pays tribute to an extremely recently departed celebrity, the only way he knows how – by roasting them.

From the minds of the hilarious and irreverent Internet sketch group Mail Order Comedy, “Workaholics” returns with all-new episodes.  The single-camera comedy features three friends who work together from 9 to 5, live together from 5 to 9 and party together 24/7.  Dress codes, deadlines and waking up before noon are not things these guys are used to.  They do their jobs and sometimes they even do them well, but they show up late, leave drunk and always live for the day…even if they don’t know what day it is.  Whether it’s Blake (Blake Anderson) dressed in a bear coat, Adam (Adam Devine) singing about Catherine Zeta Jones while high on mushrooms or The Ders (Anders Holm) celebrating his birthday with a drinking triathlon, the boys always seem to run into trouble wherever they go.  This past season, they spent their days dropping acid on a business trip, helping out and harassing their coworkers Montez, Jet Set and Waymond, trying to prove their worth to the boss, Alice, and still managed to get the job done.

Known for his role as “Ruxin” in the FX comedy “The League,” along with his stand-up specials and roles on “Community,” “Children’s Hospital,” “Parks and Recreation” and “Portlandia,” Nick Kroll comes to COMEDY CENTRAL as the creator/writer/star of ” Kroll Show ,” a fresh take on sketch comedy, showcasing Kroll’s incredible ability to create memorable and hilarious characters who pop off the screen.  While ” Kroll Show ” is made up of sketches, it’s not just a sketch show.  It’s ultimately Kroll’s smart and absurd take on of-the-moment pop culture topics like internet life, professional sports, nightclub culture and the television landscape.  Kroll (@nickkroll) fans will recognize many of their favorite characters including “The Ed Hardy Boyz,” Bobby Bottleservice, the incomparable Fabrice Fabrice, and the “Rich Dicks.”  They’ll also be introduced to an entirely new part of the Kroll Universe as Kroll transforms himself into an eccentric cast of characters throughout the season including “Liz,” a young, female publicist in LA; “Legs” the new kid at a school for handicapped kids; “Dr. Armand,” the premier canine plastic surgeon; and “Ref Jeff,” a big-butted basketball ref trying to “lock down” plans with players during the game.

Joining Kroll for the first season of ” Kroll Show ” are a roster of well-known actors and comedians including Fred Armisen , Andy Daly , Kathryn Hahn , Ed Helms , Rob Huebel , Chelsea Peretti , Adam Pally, and Jake Johnson , who showcase their comedic abilities when they make guest appearances and add an element of surprise to the show – fans never know who will pop up next.

Look out, internet – Daniel Tosh premieres the fifth season of “Tosh.0” this February on COMEDY CENTRAL.  Tosh is back to break down that vast field of twarties, vlogs, hashtags and deluded YouTube sensations for your viewing pleasure.  Tune in for a brand new season of Tosh’s take on the online Universe.

“The Jeselnik Offensive” brings Anthony Jeselnik and his signature dark and twisted point-of-view to COMEDY CENTRAL in a new weekly, topical series.  Jeselnik, known for his blistering appearances on the recent Roasts of Charlie Sheen and Donald Trump, will unleash his razor-sharp take on each week’s must-see “train wreck” news ripped from the headlines of Gawker, Reddit and the places we all troll for the darker, more shocking and lurid stories.  Two panelists will join Jeselnik to further bash pop culture and gleefully rip the veil of sanctity from off-limit topics.

“The Ben Show” is a sketch show/man-on-the-street hybrid starring comedian Ben Hoffman .  Between sketches, Hoffman works towards a personal goal, like forming a band, going on a blind date, buying a gun or returning to his home town in Kentucky.  Hoffman seeks advice and guidance from strangers to people he knows including his dad, ex-girlfriends and therapist, who also help Ben introduce the sketches.  Hoffman was a Writer/Correspondent for COMEDY CENTRAL’s “Sports Show with Norm Macdonald ” and wrote for the “COMEDY CENTRAL Roast of Roseanne.”  In addition, he has appeared on “Arrested Development,” “The New Girl” and “Drunk History.”  Earlier this year, Hoffman memorably pranked the Twittersphere during President Obama’s Hollywood fund-raising event with George Clooney , tweeting as if he was present at the event.

“Nathan For You“ (Series Premiere)

In this docu-reality comedy, Nathan Fielder (“Jon Benjamin Has A Van”) uses his business degree and life experiences to help actual small businesses turn a profit.  From getting buzz for a yogurt shop by introducing a controversial flavor, helping a taxi company reinvent the cab ride, and finding a legal way for a gas station to charge $1.75 per gallon and still make money, Nathan goes as far as it takes to make his ideas come to life.  But because of his unorthodox approach, Nathan’s sincere efforts to do good often draw real people into an experience far beyond what they signed up for.

Take a journey into the provocative and hilariously wicked mind of Amy Schumer as she explores topics revolving around sex, relationships, and the general clusterf*ck that is life in the new series “Inside Amy Schumer.”  Through a series of scripted vignettes, stand-up comedy, and man-on-the street candid interviews, Schumer tackles various themes such as “Denial,” “Getting Your Way,” and “Threesomes.”  She was recently featured as one of Variety‘s “Top Ten Comics to Watch” and her one-hour special, ” Amy Schumer : Mostly Sex Stuff,” was one of COMEDY CENTRAL’s highest-rated and most-watched stand-up specials in 2012, drawing over 1.6 million total viewers for its premiere.  In 2011, Schumer released her first album “Cutting” on COMEDY CENTRAL Records.  Her film credits include “Seeking a Friend for the End of the World” starring Steve Carell and Keira Knightley and opposite Parker Posey in “Price Check.”

Everyone’s favorite dark prince of comedy, Anthony Jeselnik, is finally bringing his new one-hour stand-up special to the common man.  ” Anthony Jeselnik : Caligula,” filmed at the legendary Vic Theatre in Chicago, obliterates subjects no one else jokes about and most people don’t even talk about.  Tune in to see what everyone will be complaining about January 13th on COMEDY CENTRAL.

Known to many as a correspondent on “The Daily Show with Jon Stewart” and as an eccentric crazed fan on HBO’s “Flight of the Conchords,” Kristen Schaal unleashes her hysterical comedic wit upon San Francisco in her first COMEDY CENTRAL original one-hour special.  ” Kristen Schaal : Live at the Fillmore” debuts Friday night, January 18, at Midnight on COMEDY CENTRAL.

Prepare yourselves, the Kattpacalypse is coming!  Comedian, rapper, and actor Katt Williams headlines a stand-up concert at the Nokia Theatre in Los Angeles before 7,000 appreciative fans.  In the network television premiere of “Katt Williams : Kattpacalypse” the comedian brings his trademark explosive energy to riffs covering everything from Doomsday to Obama.

Spend an hour every Thursday with episodes from season eight of “It’s Always Sunny in Philadelphia” on COMEDY CENTRAL.  This season, the gang figures out what to do with their Nazi grandpa, ruins a Ponderosa-McPoyle wedding, and finally seeks some mental help.  It’s sure to be one crazy escalation after another with Dennis, Charlie, Mac, Sweet Dee and of course, Frank!