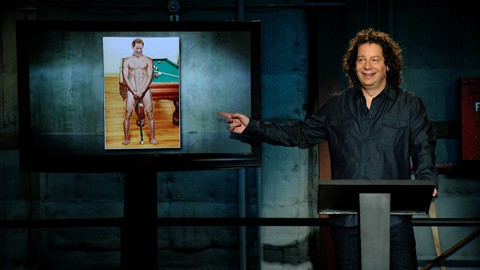 The flames are still burning hot for the ultimate “Roastmaster General,” as COMEDY CENTRAL has renewed the weekly topical series, “The Burn with Jeff Ross” for a second season, it was announced today by Kent Alterman, Head of Original Programming and Production, COMEDY CENTRAL. “The Burn” is executive produced by Ross, Mike Gibbons, Chris McGuire and Tagline Television’s Willie Mercer and Amy Zvi. Six new episodes are set to premiere on January 8, 2013.

“The world is definitely a better place for having Jeff roast it on a weekly basis,” said Alterman.

“I’m delighted to be off the road for a while and back to work on ‘The Burn,'” said Ross. “I consider it my personal mission to roast the world’s big shots, bullies, and big mouths every single week. The network only had two demands: that I cut down my cursing by ten percent and my hair by eighty percent.”

“The Burn with Jeff Ross” premiered its first season in August and averaged 1.0 million viewers per episode. The weekly series picks up where the Roasts leave off: Ross and a panel of guest comedians skewer the week’s pop culture topics in-studio, and hit the streets on the “Roaster Coaster” to take aim at “Public Enemies” such as meter maids, the paparazzi, and those things in life that just need to be taken down a notch. Other segments include “Friendly Fire,” in which Ross knocks on celebrity front doors, camera in tow; and “Too Soon,” featuring commentary on the (extremely) recently departed.

“The Burn with Jeff Ross” is executive produced by Ross, Mike Gibbons, Chris McGuire and Tagline Television’s Willie Mercer and Amy Zvi; and directed by Jay Karas. Jim Sharp and Gary Mann are the Executives in Charge of Production for COMEDY CENTRAL.

Available on-air, online and on-the-go, COMEDY CENTRAL (www.cc.com) is the #1 brand in comedy and is owned by, and is a registered trademark of, Comedy Partners, a wholly-owned unit of Viacom Inc. (NASDAQ: VIA and VIAB).