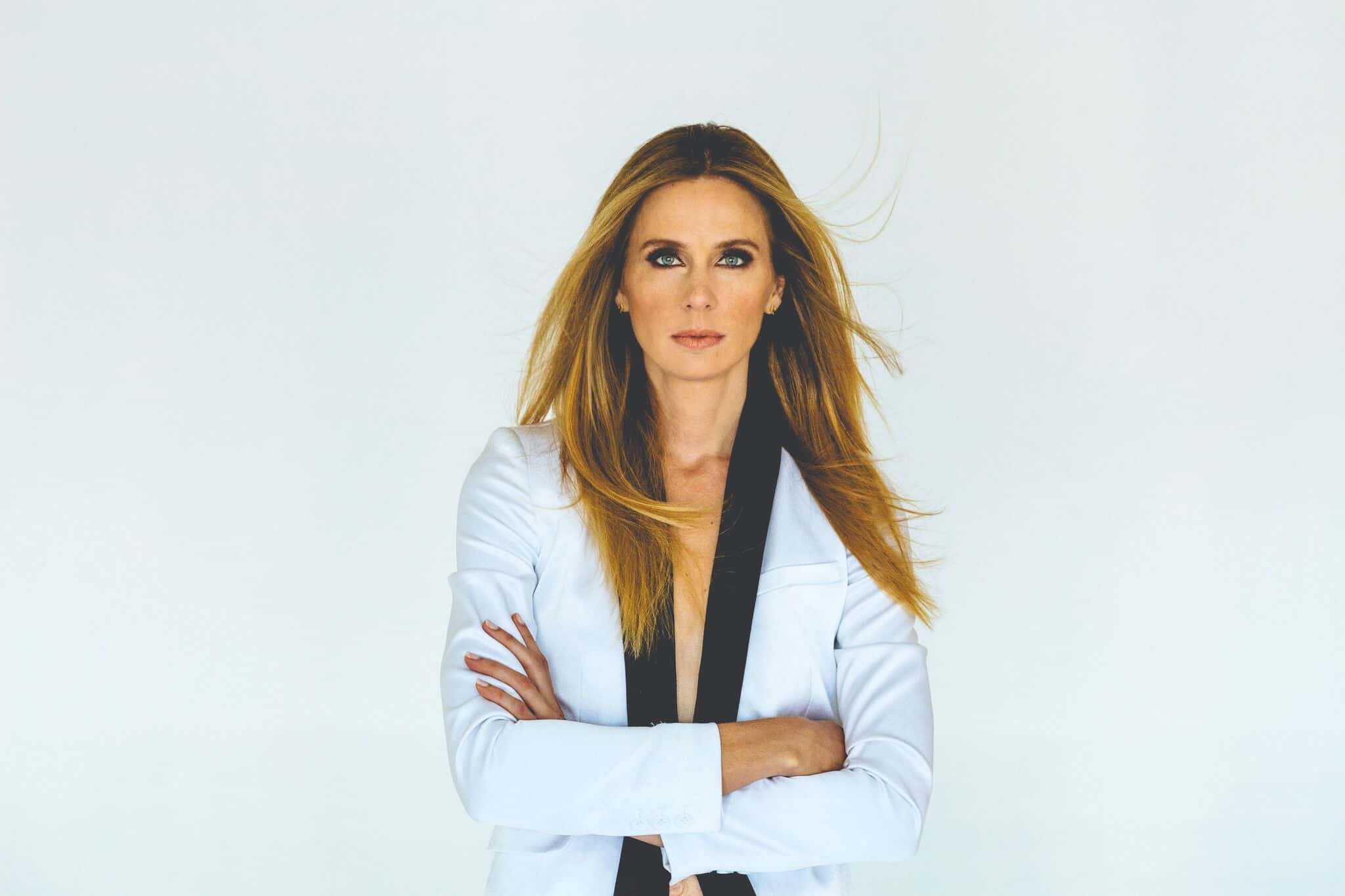 We have seen Anne Dudek on our television screens in a fantastic variety of roles for the best part of the past decade. She has been Amber aka “Cutthroat Bitch” on Fox’s medical drama HOUSE, she was the loving sister and mother in USA Network’s COVERT AFFAIRS, she was the helpful professor in Syfy’s THE MAGICIANS, and she was also the surprising love of ill-fated H.R. Wells on THE FLASH.  These are just a few of the many cool roles that Anne has brought to life that has delighted us over the years.  Each one has been a role that was memorable and touched our hearts in ways we did not expect.  Not bound by any expectations, Anne is back in another distinct and memorable role in Comedy Central’s new comedy series CORPORATE. In CORPORATE, Anne’s character is a powerful executive, tasked with wrangling corporate employees.  In an exclusive interview, Anne talks about her hilarious new role in CORPORATE and reflects on some of the key lessons she has learned through her surprising career in Hollywood.

What was the initial appeal for you about portraying Kate and working on Comedy Central’s CORPORATE?
ANNE:  The writing for the pilot was fantastic. And Kate was a woman who deals with pressures of the workplace in a way that was both absurd and quite understandable.

How would you describe who Kate is?
ANNE:  Kate is the kind of woman who was told she can have it all and still believes it. She’s worked her way to a fairly authoritative place in her company, but just wishes she could have some respect.

What do you most admire most about her?
ANNE:  Kate commits. Like, really commits!

What was it like working alongside the talented ensemble on CORPORATE?  And who do you share the most scenes with so far?
ANNE:  Adam Lustick and I are sort of co-bosses and we’re in charge of the junior executives so I have a lot to do with him. He’s got a strong improv and comedy background — in a different way than I do — and I laugh so hard from his high energy and willingness to do and try anything.

To date, what has been your favorite part about working on CORPORATE?
ANNE:  My favorite part has been seeing the cast and crew’s excitement at finally showing these episodes off!

What do you think viewers will get a kick out of when they watch CORPORATE?
ANNE:  The opening credits. I laugh every time I see them.

As an actor, what has been the one thing you haven taken away from the experience of working on CORPORATE?
ANNE:  How brilliant Lance Reddick is.

You also worked on THE FLASH.  What did you enjoy about working on that show?
ANNE:  I always find the makeup and special effects for a show like that completely fascinating.  And that my 8 year old son was impressed by my job for the first time.

Any favorite scenes that you can share from working on THE FLASH?
ANNE:  The scene where Tracy gets wooed by HR to join Team Flash.

What did you take away from that acting experience on THE FLASH?
ANNE:  Knowing that the Flash is the sort of show that really means a lot to its fans and feeling honored to enter that world.

You also worked on THE MAGICIANS.  What did you enjoy about working on that show?
ANNE:  I loved playing a kooky professor, who was quite unexpected in some ways. THE MAGICIANS is the sort of show with really moving human touches that surprise.

Any favorite scenes that you can share from working on THE MAGICIANS?
ANNE:  I really liked the little love dalliance with Penny.

What did you take away from that acting experience on THE MAGICIANS?
ANNE:  I like feeling like I could be a little weird and it would be totally welcomed!

What has surprised you most about your career so far?
ANNE:  That I have one! I started out thinking I could do theater, but never thought I was the sort of actor who could have a TV and film career. It seemed way out of reach.

At this stage of your career, what do you think you have learned from the roles and projects you have worked on?
ANNE:  I’ve learned that who women are to Hollywood is really expanding from “girlfriends and wives” expected to look a very specific way — to much more varied an interesting people both in front of and behind the camera. I have opportunities for  better roles and projects as I get older, which I did not expect.

What is your proudest achievement from your career so far?
ANNE:  Surviving being fired off a series!

Then what are the perks of where you are in your career right now?
ANNE:  Being offered roles, and feeling more confident at what I’m bringing to the table.

If there were one previous role you would like to revisit, which would it be and why?
ANNE:  I wouldn’t want to do that!

Do any of your characters and the situations they find themselves in ever leave a lasting impression on you?
ANNE:  Yes. Of course. As an actor, your job is to understand an experience and live it out when it isn’t a part of your own experience. A very moving one to me was on HOUSE, when my character Amber realized her death was imminent.

Do you find any of you character’s habits manifesting in your own life? Like what?
ANNE:  I’m pretty good at leaving work behind at the end of the day. But playing confident women actually has shown me how to be more assertive, which I definitely am not naturally.

Has there been any great advice you have gotten about working as an actor?
ANNE:  “Don’t forget, it’s a business.”

What advice would you offer to other upcoming and aspiring actors?
ANNE:  Work in a casting office! You will learn a lot!

Are you actively involved with any charities. Which charity do you work with most? And which would like to see your fans become more involved with and support?
ANNE:  I enjoy working with CASA Los Angeles, which provides support for children in the foster system.

At a time when women’s voices are rising to be heard and respected around the country and world, what do you recommend your fans do to lend support in that endeavor?
ANNE:  I don’t think I have any better advice on the plight of being a woman than any other woman or girl out there. But supporting each other and listening to the stories we have to tell — that’s a crucial step even in just a one-on-one — being first to share your reality with even just one other person. We’ve been so silenced and shamed about experiences and it can be too much to be public about life. To men, I suggest it might be radical to fully understand how different the experience of being female is and listen with as open a heart as you can.

Do you have any other upcoming projects that you can share that fans should keep an eye out for?
ANNE:  Hopefully, Season 2 of CORPORATE! Keep watching!

To see Anne’s delicious performance as Kate in CORPORATE, be sure to tune in for all new episodes on Wednesday nights at 10:00 p.m. on Comedy Central.  CORPORATE makes it series premiere on Wednesday, January 17th.  To find out more about Anne’s adventures as her career continues to grow and expand, you can follow her on Twitter @annedudek