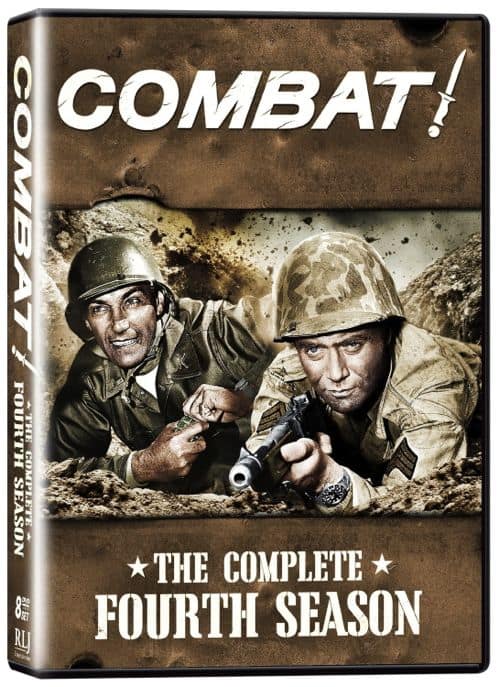 Seat42f and Image Entertainment have teamed up to give TWO lucky winners a copy of COMBAT Season 4 on DVD. For a chance to win leave a comment below telling us why you want to add COMBAT Season 4 to your DVD collection. Only one entry per person. Contest ends July 30th. Winners will be notified on July 31st via email so make sure to use a valid email address when you post your comment.

One of the television’s most popular series, the groundbreaking Combat! offers a gritty, unflinching look at American soldiers battling in Europe during World War II, confronting imposing odds and demonstrating remarkable levels of ingenuity and courage.  Vic Morrow and Rick Jason head a stellar cast in the longest-running war series in history, featuring an incomparable list of guest stars from Hollywood’s Golden Age as well as top directorial talent of Richard Donner and Robert Altman.

Combat!: The Complete Fourth Season includes all 31 episodes from the fourth season of the groundbreaking TV series: The Linesman, Main Event, Hear No Evil, Nine Place Vendee, A Sudden Terror, Evasion, Finest Hour, Breakout, The Farmer, The Raider, Crossfire, Soldier of Fortune, The First Day, S.I.W., Luck with Rainbows, The Flying Machine, The Old Men, The Casket, The Good Samaritan, Retribution, The Mockingbird, Hills Are for Heroes Part 1, Hills Are for Heroes Part 2, Counterplay, Nothing to Lose, Ask Me No Questions, The Ringer, One at a Time, Gitty, Run Sheep Run and The Leader.