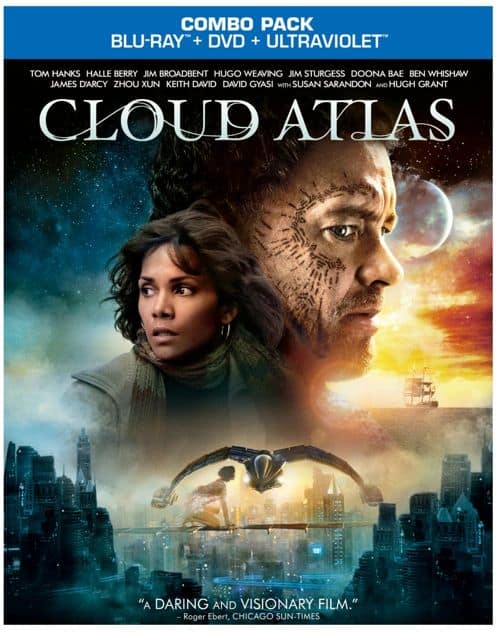 Explore how the actions and consequences of individual lives impact one another through the past, present and future when “Cloud Atlas” arrives onto Blu-ray Combo Pack, DVD and Digital Download on May 14 from Warner Bros. Home Entertainment Group. Based on the celebrated best-selling novel by David Mitchell, “Cloud Atlas” is directed by acclaimed filmmakers Lana Wachowski, Tom Tykwer, and Andy Wachowski and produced by two-time Oscar® nominee Grant Hill (“The Thin Red Line,” “The Tree of Life”) and three-time BAFTA Award nominee Stefan Arndt (“The White Ribbon,” “Goodbye Lenin!,” “Run Lola Run”).

From acclaimed filmmakers Lana Wachowski, Tom Tykwer, and Andy Wachowski, the powerful and inspiring epic drama “Cloud Atlas” explores how the actions and consequences of individual lives impact one another throughout the past, the present and the future.

Action, mystery and romance weave dramatically through the story as one soul is shaped from a killer into a hero, and a single act of kindness ripples across centuries to inspire a revolution in the distant future.

On May 14, “Cloud Atlas” will be available for download from online retailers including iTunes, Xbox, PlayStation, Amazon, Vudu and CinemaNow.

The film will also be available digitally in High Definition (HD) VOD and Standard Definition (SD) VOD from cable and satellite providers, and on select gaming consoles.

*UltraViolet allows you to collect, watch and share movies and TV shows in a whole new way.  Available with the purchase of specially marked Blu-ray discs, DVDs and Digital Downloads, UltraViolet lets you create a digital collection of movies and TV shows.  Services such as Flixster and VUDU allow you to instantly stream and download UltraViolet content across a wide range of devices including computers and compatible tablets, smartphones, game consoles, Internet-connected TVs and Blu-ray players.  Restrictions and limitations apply.  Go to ultraviolet.flixster.com/info for details.  For more information on compatible devices go to wb.com/ultravioletdevices.

Rating: R by the MPAA for violence, language, sexuality/nudity and some drug use