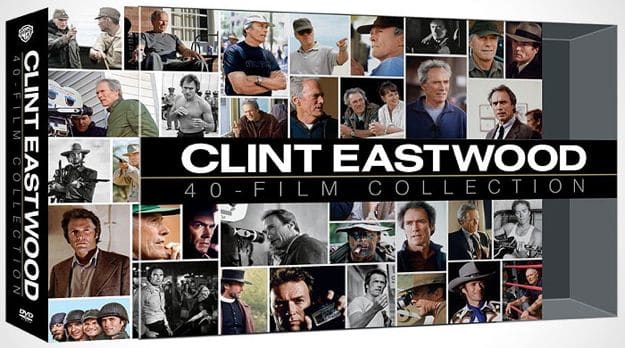 Seat42f and Warner Home Video have teamed up to give ONE lucky winner a copy of the CLINT EASTWOOD 40 FILM COLLECTION on DVD. For a chance to win leave a comment below telling us your favorite Clint Eastwood movie. Only one entry per person. Contest ends June 11th. Winner will be notified on June 12th via email so make sure to use a valid email address when you post your comment.

Clint Eastwood’s illustrious motion picture career has spanned more than half a century and touched generations of filmgoers. The filmmaker/actor has received five Academy Awards®[1]and his films have grossed more than $2 billion at the domestic box office. This year marks the 38th anniversary of the relationship between Warner Bros., Clint Eastwood and Malpaso Productions, which has culminated in more than 40 films made for the studio. Now, in honor of Warner’s year-long 90th anniversary celebration, Warner Bros. Home Entertainment will release two new Eastwood Collections, just in time for Father’s Day gift-giving. The Clint Eastwood 40 Film Collection (DVD) and the Clint Eastwood 20 Film Collection (Blu-ray™) will debut June 4, 2013, respectively priced at $179.98 SRP and $129.95 SRP.

In addition to his most recent film, Trouble with the Curve, each collection will include “Eastwood Directs: The Untold Story,” produced by Richard Schickel. This unprecedented new film focuses on Eastwood’s directorial style as seen through the eyes of many of his producing partners and actors. It explores how Eastwood’s style is unique and illustrates why he has managed to be successful for more than four decades. The major talent participating includes Martin Scorsese, Meryl Streep, Gene Hackman, Morgan Freeman and many others and the insights that emerge are nothing short of extraordinary. “Eastwood Directs: The Untold Story” will be making its television debut on TCM in May.

Eastwood’s relationship with Warner Bros. began in 1975 with the signing of a long-term pact, and Eastwood’s Malpaso Productions moved onto the studio’s storied lot. Among the many awards the actor/filmmaker has received for his work are four Oscars® and 10 nominations[2], including Best Picture and Best Director Academy Award® wins for Unforgiven (1993) and Million Dollar Baby (2005) both of which were made at Warner Bros. Eastwood has also received five Golden Globes®, countless critics association accolades and Lifetime Achievement awards from, among others, the Directors Guild of America, Screen Actors Guild, the American Film Institute and the Hollywood Foreign Press Association (Cecil B. DeMille Award). In addition, the Academy of Motion Picture Arts and Sciences presented him with the Irving G. Thalberg Memorial Award. Recently, Eastwood was made a commander in the prestigious French Legion of Honor (Légion d’honneur), cited for his “body of work, his longevity and his ability to delight audiences around the globe.”

Early in his career, Eastwood starred as the “Man with No Name” in A Fistful of Dollars, his first “spaghetti western,” which was a box office success and drew attention to the young actor. Additional roles followed, including the role of Harry Callahan in five “Dirty Harry” films, beginning in 1971. That same year, he made his directorial debut with Play Misty for Me. Other noted Eastwood films include the Charlie Parker biography Bird; The Bridges of Madison County; In the Line of Fire; Midnight in the Garden of Good and Evil; White Hunter, Black Heart; Absolute Power; Space Cowboys; Mystic River; Flags of Our Fathers; Letters from Iwo Jima; Gran Torino; and Invictus, starring Oscar® winners Morgan Freeman[3] and Matt Damon[4] in the inspiring true story of how Nelson Mandela joined forces with Francois Pienaar, captain of South Africa’s rugby team, to help unite their country.