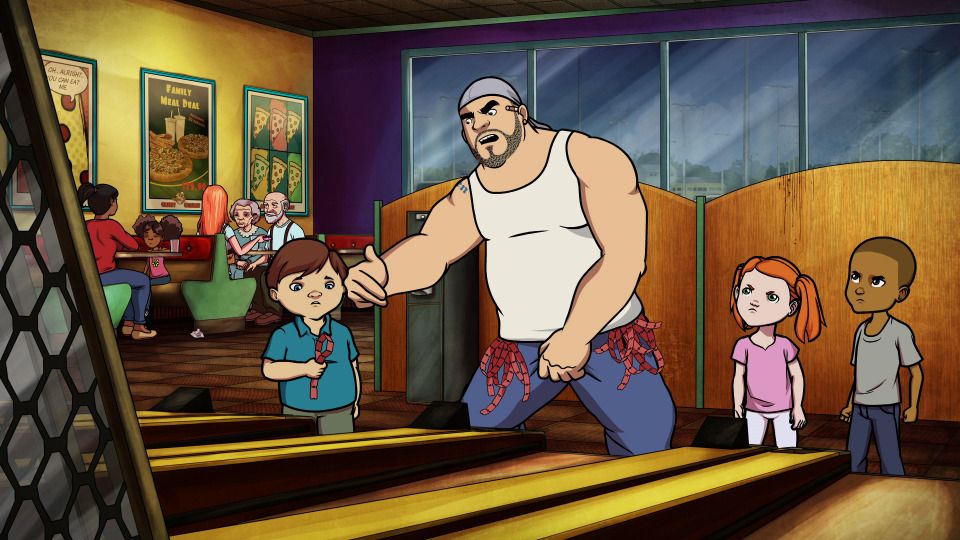 Chozen defies just about every stereotype rap music has to offer. He isn’t a minority, didn’t have a hard life, and isn’t into illegal activities, at least, not before he ended up behind bars. He’s a sweet boy who cares about people and loves men, something one does not expect to see in this world.

The question is, how long will that premise remain funny? Initial reactions will likely be of laughter because of the bizarre set up, but after several weeks of the show, that won’t be enough to maintain viewers. There must be a compelling story or characters that viewers want to spend time with. After watching only a single episode, I didn’t see that, but I’ll give it another chance before dismissing it, mostly because the voice cast, which also includes Hannibal Buress, Paul Iacono, Michael Pena, Nick Swardson, Gary Anthony Williams, and Danny McBride, is pretty good.

Part of the challenge CHOZEN faces is attracting fans that aren’t into rap music. I myself don’t appreciate the style for the most part, and the “Pilot” featured several interludes that I did not enjoy. CHOZEN doesn’t defy its source material enough to appeal outside of it from the start. The lyrics are amusing enough, and that helps some, but in order for the series to succeed, it needs a broad-ish base, or a way for its target audience to find it. I’m not sure FX provides that automatically, with Archer being the lead in, but I could be wrong.

I did enjoy several parts of the story that didn’t involve rapping. Chozen and Tracy have an interesting relationship that bears further exploration. Chozen is admirable for not being angry all the time. Jail has given him a taste for weed, made him care less about what others think, and he curses more, but at heart, he’s still a good guy. This is evidenced by the fact that he’s not obsessed with revenge, as many would be. He can grow up and move on, and that’s laudable.

Chozen is the type of guy you want to see do well, but while he does have talent for rapping, I’m not sure he has the personality to make it in such a public business. He has confidence, but lacks the ability to play the politics, so it would be unrealistic for him to go too far.

But it also makes a little bit of a pushover, when taken with the fact that he just quietly served his jail sentence and never appealed to the media or anyone to help him. Or maybe he did and that bit just isn’t included in the “Pilot.” If so, it really should have been. It’s frustrating that Chozen doesn’t just tell the truth. Surely, his body could be drug tested, and his friends and family could testify to his character. Is our justice system so broken we just have to accept that he served a long time for no good reason?

Perhaps I’m overthinking CHOZEN. It’s a comedy, and the most important thing is that it should make people laugh. Had I been laughing, I probably wouldn’t be asking so many questions. Humor is subjective, and I won’t say CHOZEN is a bad series, it’s just not my cup of tea. It is by the producers of Archer and Eastbound and Down, and while I love the former, the latter I can’t stand. Fans of that show, however, who enjoy that sensibility might like this one, too.