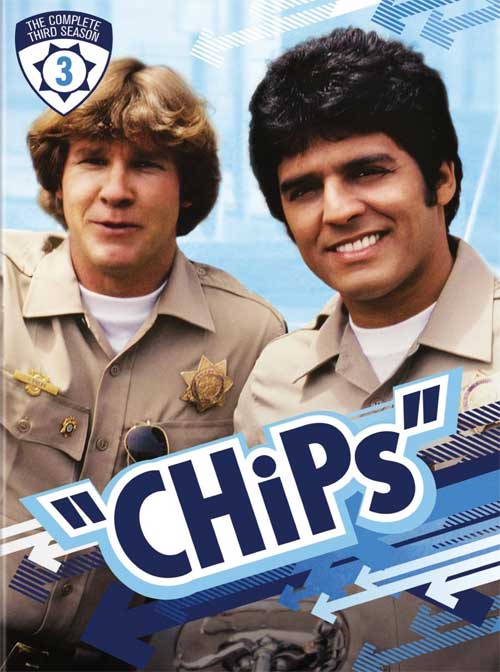 Seat42f and Warner Bros. Home Entertainment have teamed up to give THREE lucky winners a copy of CHiPs Season 3 on DVD. For a chance to win leave a comment below telling us why you want to add CHiPs Season 3 to your DVD collection. Only one entry per person. Contest ends March 17th. Winners will be notified on March 18th via email so make sure to use a valid email address when you post your comment.

The action and fun of CHiPs Season 3 continues in this wildly popular action-drama that stars Golden Globe nominated Erik Estrada and Larry Wilcox returning as high-spirited California Highway Patrol motorcycle officers Francis “Ponch” Poncherello and Jon Baker.  Pursuing justice was never cooler as these two fearless partners take to the roads under the bright Southern California sun.  Nothing stops them from joining the action … from high-speed car chases to confrontations with armed criminals … CHP officers Ponch and Jon are on patrol — ready, willing, and more than able- in this 5-disc collection of non-stop adventure.  Warner Bros. Home Entertainment will release CHiPs: The Complete Third Season on March 3, 2015 for $29.98.

Last season, Ponch and Jon  were on the lookout for all sorts of criminal operations.  That continues this season in the comedic melodrama fashion that only Ponch and Jon can provide as they continue to  catch  people who have been menacing the L.A Freeways. Whether it’s staging an accident as part of an insurance scam or punks breaking into cars, California Highway Patrol is there to stop them. Infused with the same light-hearted subplots of the past, CHiPs: The Complete Third Season brings you entertaining action-drama at its finest!

“We are delighted to finally release CHiPs: The Complete Third Season for the first time ever on DVD,” said said Rosemary Markson, WBHEG Senior Vice President, TV Brand Management and Retail Marketing., “The third season of this immensely popular show is sure to delight fans of every age, and will allow for the next generations of fans to fall in love with this series.”