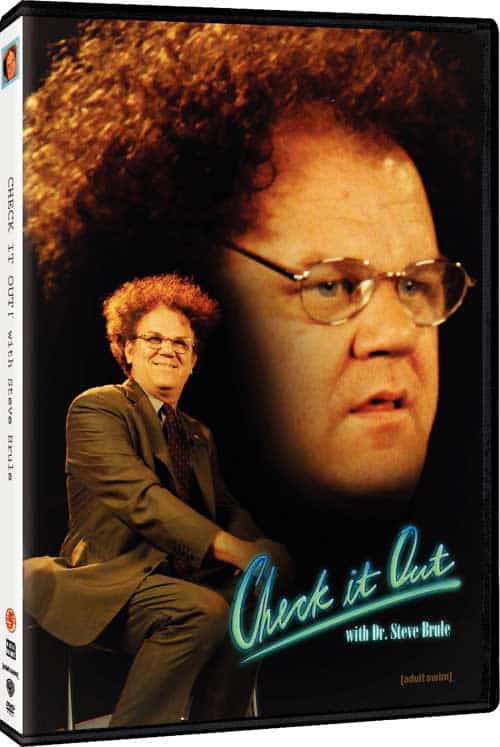 Seat42f and Adult Swim have teamed up to give ONE lucky winner a copy of CHECK IT OUT WITH DR STEVE BRULE on DVD. For a chance to win leave a comment below telling us why you want to add CHECK IT OUT WITH DR STEVE BRULE to your DVD collection. Contest ends October 18th. Winner will be notified on October 19th via email so make sure to use a valid email address when you post your comment.

Getting your daily dose of Dr. Steve Brule just got a whole lot easier. Adult Swim is introducing the good doctor – portrayed by Oscar Award nominee John C. Reilly – to DVD with the release of Check It Out! Season 1 and 2 on October 16, 2012. Featuring all 12 episodes from the series’ two seasons, fans join Dr. Steve for the ride as he explores the important things in life such as food, intimacy issues, family, beauty, friends and fear. The Check It Out! Season 1 and 2 DVD will also feature deleted scenes and extended snippets and will be available for the suggested retail price of $19.97.

Produced by Reilly and Abso Lutely Productions (Tim and Eric Awesome Show! Great Job!), Check It Out! is a parody of a local market’s newsmagazine show wherein the host, Dr. Steve, chats with local celebrities, delves into interesting things around town, and provides 100%-accurate and insightful health and lifestyle tips. Since its debut as its own series based on skits from Tim and Eric Awesome Show, Great Job!, more than 6.6 million people tuned-in for the first season, making it a top 15 show with adults 18-24, adults 18-34, and men 18-34. During its second season, Check it Out! became the #2 show in its timeslot among men 18-34, and #4 in its timeslot among adults 18-34, according to Nielsen Media Research.