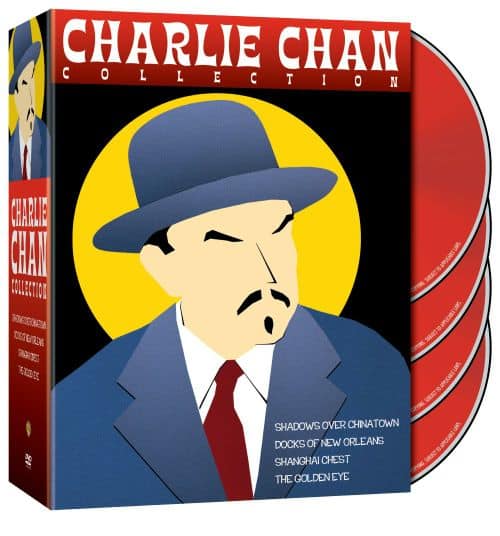 Seat42f and Warner Home Video have teamed up to give ONE lucky winner a copy of CHARLIE CHAN COLLECTION on DVD. For a chance to win leave a comment below telling us why you want to add CHARLIE CHAN COLLECTION to your DVD collection. Only one entry per person. Contest ends August 14th. Winner will be notified on August 15th via email so make sure to use a valid email address when you post your comment.

On August 6, Warner Bros. Home Entertainment brings back the legendary master of crime in the Charlie Chan Collection — four beloved films making their DVD debut, and now available for the first time, newly remastered, as a single collection. Included are Shadows Over Chinatown, starring Sidney Toler in one of his last Chan films, plus Docks of New Orleans, Shanghai Chest, and The Golden Eye starring Roland Winters, the last actor to play the detective on film. The 4-disc set will sell for $39.92 SRP. Order due date is July 2.

Writer Earl Derr Biggers created Charlie Chan, a fictional Chinese-American sleuth, in a series of printed tales beginning in 1923. As early as 1926, the first of more than 48 Charlie Chan films was put on the silver screen. Actor Warner Oland, born in Sweden, began a popular run for Fox in 1931 in Charlie Chan Carries On. After its success, Fox would produce 15 more Chan films starring Oland. Not surprisingly, the films became the most popular in 1930s China.

After Oland died, Sidney Toler, an American actor with Scottish roots, took on the Chan role. Toler starred in 22 Chan films, first for Fox and later for Monogram Studios. After Toler’s death, Roland Winters became Chan in six more films. The character has also been featured frequently on radio, television and in the comics.