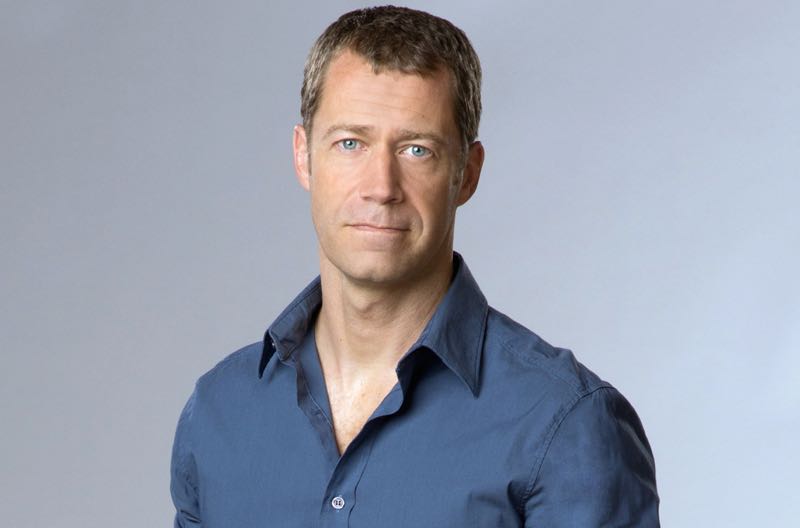 Catching up with Colin Ferguson at the recent Hallmark part during the Television Critics Associations’ Summer 2015 Tour, we got a bit of scoop on what lies ahead as Paul Watson simultaneously woos Olivia and takes on Assistant District Attorney Rebecca Marshall (Alex Baldwin).

Has Paul Watson come to town just to clean up the D.A.’s office, or what is his motivation for coming to Cedar Cove?
COLIN:  (Laughs) No, Paul is presenting an obstacle for certain characters on the show, that if maybe their life is problematic maybe they can make some different choices.

So he just might be a potential romance for Olivia then?  Or does he have his eye on another lucky lady?
COLIN:  At this point in the season, no.  He definitely has eyes for Olivia, but I think he’s open to whatever at this point.  Not in a weird lascivious way and definitely to do things properly.

Is he looking to settle down? Is that why he came to Cedar Cove?
COLIN:  Yeah, and he wants to find a nice partner and make a go of it.

Are you excited to see where this journey with Paul goes?
COLIN:  Absolutely!  What I love about it is that it is not lascivious.  It could have so easily been arch and too much, and all that stuff.  But they really kept it light.  He is a friend.  He’s just, “This is where I am at and I’m just going to leave it there.”

Do you think Paul sees Jack as serious competition?
COLIN:  I don’t think he sees it as a competition.  With regards to Olivia, he is like, “This is where I am at and this is what I feel and do with it what you will.”

He always seems to have some issues to iron out with Rebecca at the D.A.’s office as she doesn’t seem to want to take orders under his command and pushes back at him quite a bit.
COLIN:  (Laughs) Ah, Rebecca!  She is such a pain.  She is wildly inappropriate.  She does stuff, and he’s like, “Are you kidding?! You are lucky that you are not fired.”

Paul did try to fire her.
COLIN:  Exactly!  That’s what would have happened in the real world.  That stuff doesn’t fly.  So I’m on his side with that.  I like the way the show wrote all that stuff with Paul and Rebeca, for sure.

Where is Paul’s story going this season?  It can’t be just about the romance.  Where is the bigger drama story going to come from?
COLIN:  It’s partially about the romance, actually.  It’s mostly that.  The show will reveal what he went through to get to Cedar Cove and what he went through to become a D.A. and all that stuff.  So his backstory fills in and it makes it more of a pointed decision.  It’s just life stuff that he goes through.  It’s not as melodramatic or operatic as some shows, but that makes it nice.

Is that what attracted you to the role?
COLIN:  Yeah, it just sort of plopped in my lap.  I wasn’t sure how many episodes I was going to do. Then I got up there and everyone was so nice and so welcoming and accommodating that it became hard not to stay on for the season, which was what I ended up doing. So I ended up staying for the whole season. I was like, “yeah, sure. I’ll keep doing it.”

So you can me and they loved you and they wouldn’t let you leave.
COLIN:  (Laughs) That was nice of them.  They made me feel very appreciated the entire time.

How did it feel for you transitioning from the science fiction genre type shows into a family-drama/romance type world like on CEDAR COVE?
COLIN:  It was really fun.  You got to set and they only work days.  Plus, there’s no stunts or vis-effects or special effects; there’s no gags; there’s no make-up; there’s no green screen. So you look at the schedule for the day and you think, “so we just talk?!”  And that’s your day!  That’s all you do.  It was wonderful.  It was a really nice change of pace.  There was so much of that tech stuff on EUREKA; not every second of it, but it was nice to do something on a completely different level.

So you really enjoyed all that walking and talking.
COLIN:  (Laughs) Not even walking!  We just stand in some of the scenes.  So you just walk in and stand for a bit and then leave.  It was wonderful.  It was so easy.  And it actually just let me work.  It lets you just act.  I found it easier on my body.  Because tree’s a strain on your body when every scene is reacting with: “Oh no!” and “Aaaahhh!” You feel like you’ve got a bit of PTSD at the end of the day and you are going home shaking a little bit from it.  All that reacting to: “Everyone’s about to die!” You have to recover from that.

That explains why you are smiling in every scene of CEDAR COVE then.
COLIN:  (Laughs) Right! I’m super relaxed and super happy.  It just played that way, and I got lucky because everyone was so nice and so accommodating and welcoming.  That just made it for me.  At the end of it, I was like, “I’m so happy that I’m staying.”

As a teaser for the fans, what can they anticipate with regards to Paul Watson this season on CEDAR COVE?
COLIN:  I would say:  anticipate being a little bit conflicted.  They did a phenomenal job writing him with heart and morality.  But his intentions might be in conflict with others.  They did a great job in writing that.  I look forward to people seeing it.

But we are still going to love him, right?
COLIN:  I hope so!

To find out just how successful Paul’s charm tactics are in swaying Olivia’s heart and if he will ultimately win the ongoing battle for the District Attorney’s office with Rebecca, be sure to tune in for all new episodes of CEDAR COVE on Saturday nights at 8:00 p.m. on Hallmark Channel.