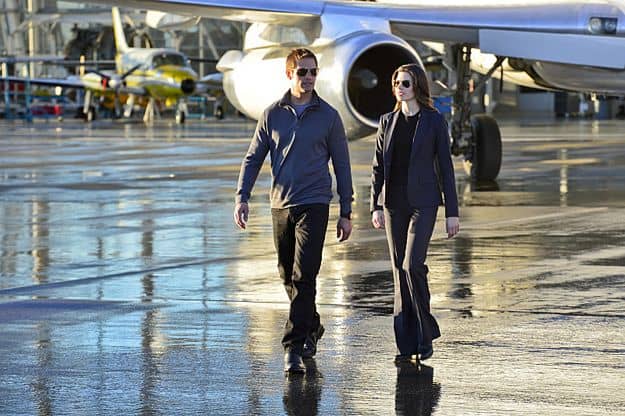 CBS Television Studios will feature the world premiere screenings of two of its highly anticipated new series, INTELLIGENCE and STAR-CROSSED, as well as an exclusive panel discussion with fan-favorite series BEAUTY AND THE BEAST at Comic-Con 2013 in back-to-back panels on Thursday, July 18. On Sunday, July 21, fans are invited to join the cast and producers of this summer’s critically acclaimed series UNDER THE DOME.

INTELLIGENCE (Co-Pro with ABC Studios) Hashtag: #IntelligenceSDCC 10:00 AM – 11:00 AM Josh Holloway (Lost) makes his highly anticipated return to television in the new CBS series INTELLIGENCE, with co-stars Meghan Ory (Once Upon a Time) and Marg Helgenberger (CSI: CRIME SCENE INVESTIGATION). Be the first to see the world premiere of the first episode, followed by a panel discussion with series stars and executive producers Michael Seitzman (North Country), René Echevarria (Terra Nova, Star Trek: Deep Space Nine) and Tripp Vinson. The panel discussion will be moderated by Debra Birnbaum, President and Editor in Chief, TV Guide Magazine. Holloway, Ory and Helgenberger will participate in an exclusive autograph signing following the panel at the CBS Interactive Booth at 11:15 AM-12:00 PM on the convention floor. For the latest updates on INTELLIGENCE, follow @IntelligenceCBS and stars @meghanrory, @Marghelgen and @RadyMichael on Twitter.

STAR-CROSSED Hashtag: #StarCrossedSDCC 11:00 AM – 12:00 PM It’s a war of the worlds when an epic “Romeo and Juliet” romance ignites between a human girl and an alien boy, as he and others of his kind (Atrians), are integrated into a suburban high school after being banished for ten years. As this romance causes a violent encounter between their two families, can this couple’s love – and peace between the species – survive? Join Matt Lanter (90210, Star Wars: The Clone Wars), Aimee Teegarden (Friday Night Lights), Grey Damon (Secret Circle, Nine Lives of Chloe King) along with executive producers Adele Lim (One Tree Hill), Meredith Averill (THE GOOD WIFE), Josh Appelbaum and Andre Nemec (Mission Impossible, Alias), and Scott Rosenberg (Gone In 60 Seconds, Con Air) for a first-look at a futuristic story of forbidden love, STAR-CROSSED, from The CW network. The panel discussion will be moderated by TVLine’s Meg Masters. For the latest updates on STAR-CROSSED, go to www.facebook.com/cwstarcrossed and follow @CWStarCrossed and stars and producer @Aimeeteegarden, @DamonGrey, @MattLanter and @mereschmere on Twitter.

BEAUTY AND THE BEAST Hashtag: #BatbSDCC 12:00 PM – 12:45 PM Paging all Beasties! Kristin Kreuk (Smallville) and Jay Ryan (Terra Nova) along with executive producers Jennifer Levin (Without a Trace) and Sherri Cooper (Brothers and Sisters) invite all #Beasties to join them for an exclusive discussion of what is ahead for #VinCat and the sophomore season of the breakout fan-favorite series from The CW network. The cast and producers have a special surprise for fans at the panel which will be moderated by Jenna Busch from Fanhattan.com. For the latest updates on BEAUTY AND THE BEAST, go to www.facebook.com/BeautyandtheBeast, http://batbnation.tumblr.com, and follow @CWbatb and stars and producers @JayRyan, @MsKristinKreuk, @NinaLisandrello, @AustinBasis, @Sendhil_Rama, @BATBWriters, @sherricooper22 and @jenniferlevin22 on Twitter.

UNDER THE DOME Hashtag: #DomeSDCC 2:15 PM – 3:15 PM The dome has descended upon Chester’s Mill and there is no way in or no way out! Get a sneak peek of what’s in store for the town and its residents as they become sealed off from the rest of the world in this summer’s critically acclaimed series based on the bestselling book by Stephen King, from Amblin Television. Stars Dean Norris (Breaking Bad), Mike Vogel (Bates Motel) and Rachelle Lefevre (Twilight) will be joined by executive producers Brian K. Vaughan (Lost) and Neal Baer (Law & Order: SVU). Norris, Vogel and Lefevre will participate in an exclusive autograph signing following the panel at the CBS Interactive Booth at 3:30 PM – 4:15 PM on the convention floor. For the latest updates on UNDER THE DOME, go to www.facebook.com/UnderTheDomeCBS, http://underthedomeoncbs.tumblr.com, and follow @UnderTheDomeCBS and stars and producers @DeanJNorris, @RachelleLefevre, @nataliemartinez, @RealBritt_Rob, @colinfordactor, @1NicholasStrong, @jojopurdy, @mackenzielintz, @NealBaer and @AishaHinds on Twitter.