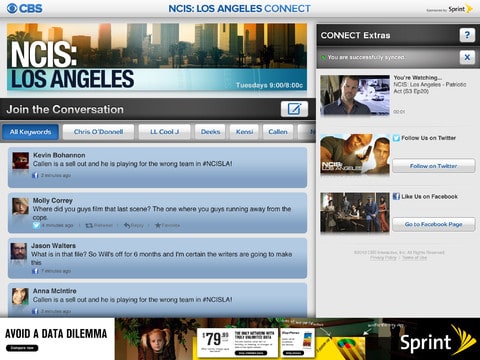 NCIS: Los Angeles Connect enables viewers to more deeply engage with each and every episode, whether they’re watching NCIS: LOS ANGELES live on their local CBS station, on-demand, or on their DVR, by utilizing the app’s sync function. The sync function will pinpoint which episode is being watched, locate how far along the viewer is in the episode, and tailor the experience accordingly.

The app is programmed by NCIS: LOS ANGELES writers and producers to offer a truly authentic NCIS experience. It will give fans an opportunity to take a deeper look at elements of the show, like photos and evidence from the NCIS: LOS ANGELES crime lab, which play a key role in the story but may only appear on screen for a split second. Other content features include behind-the-scenes access for each episode and a spotlight on the technology the NCIS: LOS ANGELES team uses on the job. NCIS: Los Angeles Connect will also include character back-stories, social feeds, quizzes, polls and more.

“As show creators, we are always looking for ways of adding to the audience experience and enjoyment of what we make. So I was very excited when CBS Interactive developed this app,” said Shane Brennan, Executive Producer and Creator of NCIS: LOS ANGELES. “The audience will be able to follow the unfolding episode, interacting in real time with each story shift or character interaction.  As well as allowing the audience to review the evidence, check out suspects in the story and vote on who they think is the guilty party, the app will also give them access to maps, videos and photos from the episode and the show. Fans are going to find this app enormous fun!”

In addition to NCIS: Los Angeles Connect’s exclusive behind-the-scenes content and interactive features, fans will also be able to join the social conversation around the show through the apps integrated social feeds. Using the CBS Connect platform, NCIS: Los Angeles Connect lets fans interact with one another and NCIS: LOS ANGELES talent via Twitter or Facebook all within the application.

“We’ve seen a tremendous response to the CBS Connect social platform we launched on CBS.com earlier this year. Layering that social experience into a content rich, show-specific application for one of our flagship dramas is a natural extension,” said Marc DeBevoise, Senior Vice President and General Manager of Entertainment at CBS Interactive. “The NCIS: Los Angeles Connect iPad app brings the series’ avid fans closer to the show and delivers an opportunity for them to more deeply engage with every episode.”