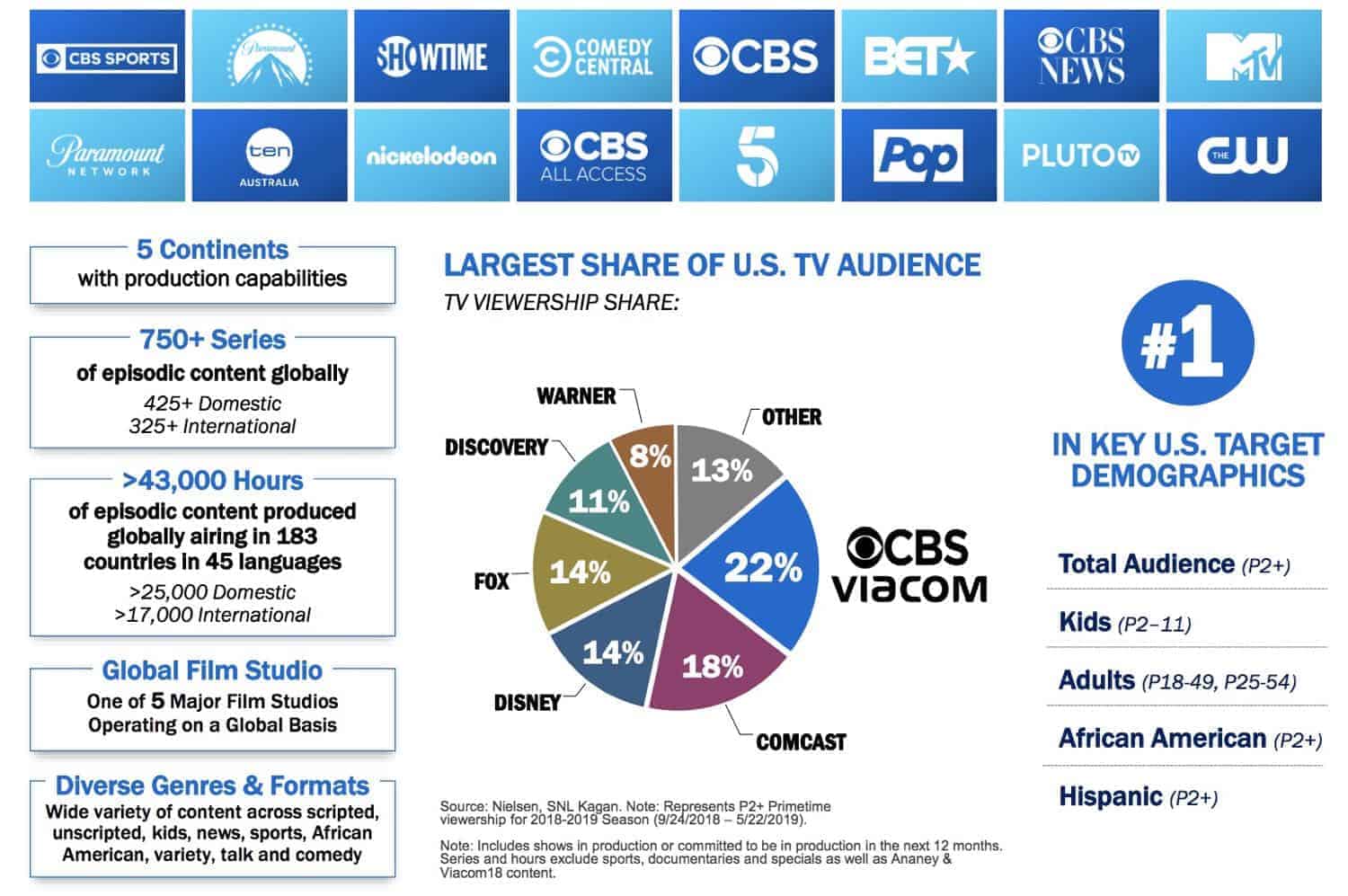 CBS (NYSE: CBS.A, CBS) and Viacom (NASDAQ: VIA, VIAB), two of the world’s leading entertainment companies, today announced they have entered into a definitive agreement to combine in an all-stock merger, creating a combined company with more than $28 billion in revenue.

The combined company, ViacomCBS Inc., will be a leading global, multiplatform, premium content company, with the assets, capabilities and scale to be one of the most important content producers and providers in the world. The combined company will be a scale player globally, with leadership positions in markets across the U.S., Europe, Latin America and Asia. This includes the largest television business in the U.S., with the highest share of broadcast and cable viewing across all key audience demographics, and strength in every key category, including News, Sports, General Entertainment, Pop Culture, Comedy, Music and Kids – making it a first-choice partner to distributors and advertisers. In addition, the combined company will possess a portfolio of fast-growing direct-to-consumer platforms, including both subscription and ad-supported offerings. It will also include a major Hollywood film studio, Paramount Pictures, which has been a producer and global distributor of filmed entertainment for more than a century and continues to be a global box office driver. Taken together, these distinct strengths will accelerate CBS and Viacom’s ability to deliver an array of compelling content to important and diverse audiences across both traditional and emerging platforms around the world.

Bob Bakish, President and Chief Executive Officer, Viacom, will become President and Chief Executive Officer of the combined company. Bakish said: “Today marks an important day for CBS and Viacom, as we unite our complementary assets and capabilities and become one of only a few companies with the breadth and depth of content and reach to shape the future of our industry. Our unique ability to produce premium and popular content for global audiences at scale – for our own platforms and for our partners around the world – will enable us to maximize our business for today, while positioning us to lead for years to come. As we look to the future, I couldn’t be more excited about the opportunities ahead for the combined company and all of our stakeholders – including consumers, the creative community, commercial partners, employees and, of course, our shareholders.”

Joe Ianniello, President and Acting Chief Executive Officer, CBS, will become Chairman and CEO of CBS. Ianniello, who will oversee all CBS-branded assets in his new role, said: “This merger brings an exciting new set of opportunities to both companies. At CBS, we have outstanding momentum right now – creatively and operationally – and Viacom’s portfolio will help accelerate that progress. I look forward to all we will do together as we build on our ongoing success. And personally, I am pleased to remain focused on CBS’s top priority – continuing our transformation into a global, multiplatform, premium content company.”

Shari Redstone, Vice Chair of the Boards of Directors, CBS and Viacom, said: “I am really excited to see these two great companies come together so that they can realize the incredible power of their combined assets. My father once said ‘content is king,’ and never has that been more true than today. Through CBS and Viacom’s shared passion for premium content and innovation, we will establish a world-class, multiplatform media organization that is well-positioned for growth in a rapidly transforming industry. Led by a talented leadership team that is excited by the future, ViacomCBS’s success will be underpinned by a commitment to strong values and a culture that empowers our exceptional people at all levels of the organization.”

Strategic Rationale
• Premium content at scale. The combined company will possess a portfolio of powerful consumer brands, including CBS, Showtime, Nickelodeon, MTV, BET, Comedy Central and Paramount Network, as well as one of the largest libraries of iconic intellectual property, spanning every key genre and addressing consumers of all ages and demographics. This library comprises 140,000+ TV episodes and 3,600+ film titles, and reunites fan-favorite franchises such as Star Trek and Mission: Impossible. The combined company will also have more than 750 series currently ordered to or in production. In addition, it will include a major Hollywood film studio, Paramount Pictures, which creates and distributes feature-length entertainment around the world. The combined company will also be one of the largest content spenders, with more than $13 billion spent in the last 12 months.
• Global leadership positions. The combined company will be a broadcast and cable leader in key markets around the world, reaching more than 4.3 billion cumulative TV subscribers. In the U.S., the combined company’s portfolio of broadcast, premium and cable networks will have the highest share of viewing on television among key audiences, including Kids, African Americans and Hispanic viewers. In addition, the combined company will operate strong broadcast networks in the UK, Argentina and Australia, as well as pay-TV networks across more than 180 countries. It will also have significant global production capabilities across five continents – creating content in 45 languages.
• Powerful, three-part strategy for growth. In a quickly evolving media landscape, the combined company will benefit from its distinct competitive position as one of the most important global content providers – for its own platforms as well as for third parties. This will enable the combined company to accelerate the growth of its direct-to-consumer strategy, enhance distribution and advertising opportunities and create a leading producer and licensor of premium content to third-party platforms globally.

1. Accelerate direct-to-consumer strategy. Together, the combined company will be positioned to accelerate and expand its direct-to-consumer strategy through its proven and diverse portfolio of both subscription and adsupported offerings. These include CBS All Access and Showtime, which deliver premium, branded content live and on demand to millions of subscribers; Pluto TV, the leading free streaming TV service in the U.S.; and niche products such as CBSN, ET Live and Noggin. It also has an opportunity to expand globally by leveraging its existing strength in both subscription and ad-supported offerings, combined library, content production capabilities and international infrastructure.

2. Enhance distribution and advertising opportunities. The breadth and depth of the combined company’s reach across both traditional and new platforms – including 22% of U.S. TV viewership – will drive important new distribution and advertising opportunities. For distributors, this includes forming more expansive and multifaceted relationships, and applying the benefit of retransmission consent across a combined portfolio. For advertisers and agencies, the combined company will provide industry-leading reach through a variety of formats, including a portfolio of differentiated advanced advertising and marketing solutions, such as CBS Interactive, Viacom Vantage and Viacom Velocity, which will be applied against significant, expanded inventory across the portfolio.

3. Create a leading producer and licensor of premium content to third-party platforms globally. As one of the biggest premium content providers in the world, the combined company is positioned to deliver content to a diverse global customer base that includes MVPDs, broadcast and cable networks, subscription and adsupported streaming services, mobile providers and social platforms. Notably, in addition to content licensing, CBS and Viacom are developing must-watch programming for a broad range of third-party networks and platforms to feed significant demand for original, premium content.

• Significant value for all shareholders. The combined company will have an attractive growth outlook and increased financial scale with substantial free cash flow, which will enable significant and sustained investment in programming and innovation, as well as support the combined company’s commitment to maintaining a modest dividend payment. The transaction will be EPS accretive and is expected to deliver an estimated $500 million in annualized run-rate synergies within 12-24 months following closing, with additional strategic benefits. With one of the strongest balance sheets in the industry, the combined company will benefit from a solid investment grade rating.

In addition to Bakish and Ianniello, the leadership team of the combined company will include Christina Spade as EVP and Chief Financial Officer; and Christa D’Alimonte as EVP, General Counsel and Secretary.

NAI, which holds approximately 78.9% and 79.8% of the Class A voting shares of CBS and Viacom, respectively, has agreed to deliver consents sufficient to assure approval of the transaction. More than two-thirds of the CBS directors unaffiliated with NAI (and all of those unaffiliated directors who voted on the transaction) have approved the transaction, as required in order to permit NAI to consent to the transaction under the terms of the 2018 settlement agreement entered into among CBS, NAI and certain other parties thereto.

The transaction is subject to regulatory approvals and other customary closing conditions. It is expected to close by the 2019 calendar year end.