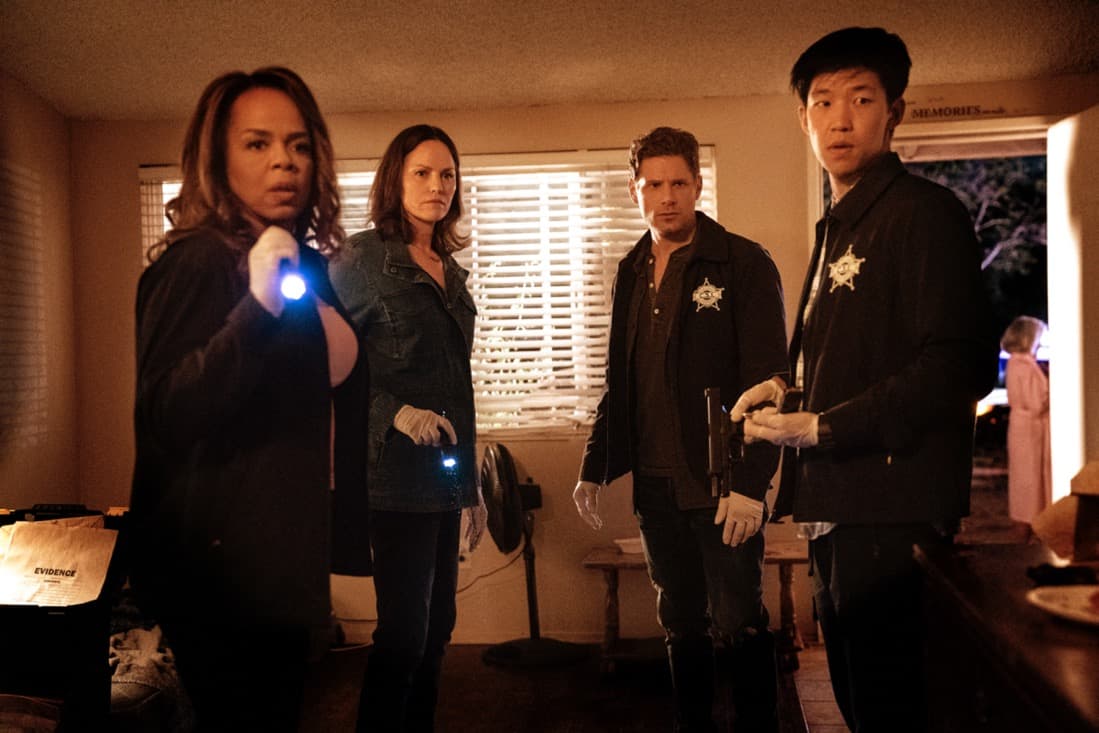 CSI: VEGAS, the sequel to the Network’s global hit “CSI: Crime Scene Investigation,” opens a brand-new chapter in Las Vegas—the city where it all began. Facing an existential threat that could bring down the entire Crime Lab and release thousands of convicted killers back onto the neon-lit streets of Vegas, a brilliant new team of investigators led by Maxine Roby (Paula Newsome) must enlist the help of old friends, Gil Grissom (William Petersen), Sara Sidle (Jorja Fox) and David Hodges (Wallace Langham). This combined force will deploy the latest forensic techniques to do what they do best—follow the evidence—in order to preserve and serve justice in Sin City. Jason Tracey serves as executive producer and showrunner; Jerry Bruckheimer, Jonathan Littman, KristieAnne Reed, Anthony Zuiker, Carol Mendelsohn, Ann Donahue, Craig O’Neill, William Petersen and Cindy Chvatal are also executive producers. Uta Briesewitz is an executive producer and directed (initial episode only) from a script by Tracey. The series is produced by CBS Studios in association with Jerry Bruckheimer Television.

From Emmy Award-winning executive producer Dick Wolf, fast-paced drama FBI: INTERNATIONALis the third iteration of the successful FBI brand that follows the elite operatives of the Federal Bureau of Investigation’s International Fly Team. Headquartered in Prague, they travel the world with the mission of tracking and neutralizing threats against American citizens wherever they may be. Not allowed to carry guns, the Fly Team relies on intelligence, quick thinking and pure brawn as they put their lives on the line to protect the U.S. and its people. Dick Wolf, Derek Haas, Matt Olmstead, Arthur Forney and Peter Jankowski are the executive producers. The series is produced by Universal Television, a division of Universal Studio Group, in association with CBS Studios.

GHOSTS is a single-camera comedy about Samantha (Rose McIver) and Jay (Utkarsh Ambudkar), a cheerful freelance journalist and up-and-coming chef from the city, respectively, who throw both caution and money to the wind when they decide to convert a huge rundown country estate they inherited into a bed & breakfast—only to find it’s inhabited by the many spirits of deceased residents who now call it home. The departed souls are a close-knit, eclectic group that includes a saucy Prohibition-era lounge singer, a pompous 1700’s Militiaman, a ‘60s hippie fond of hallucinogens, an overly upbeat ‘80s scout troop leader, a cod-obsessed Viking explorer from 1009, a slick ‘90s finance bro, a sarcastic and witty Native from the 1500s, and a society woman and wife of an 1800’s robber baron who is Samantha’s ancestor, to name a few. If the spirits were anxious about the commotion a renovation and B&B will create in their home, it’s nothing compared to when they realize Samantha is the first live person who can see and hear them. Joe Port & Joe Wiseman, Mathew Baynton, Jim Howick, Simon Farnaby, Laurence Rickard, Ben Willbond and Martha Howe-Douglas; Alison Carpenter, Debra Hayward, and Alison Owen (Monumental Television); and Angie Stephenson (BBC Studios) are the executive producers for CBS Studios in association with Lionsgate Television and BBC Studios’ Los Angeles production arm. Trent O’Donnell is an executive producer (pilot only) and directed the pilot from a script by Port & Wiseman. Based on the BBC Studios distributed format.

The world’s most successful television series continues on the seductive shores of the Aloha State with NCIS: HAWAI ‘ I, where the first female Special Agent in Charge of NCIS Pearl Harbor, Jane Tennant (Vanessa Lachey), has thrived and risen through the ranks by equal parts confidence and strategy in a system that has pushed back on her every step of the way. Together with her unwavering team of specialists, they balance duty to family and country while investigating high-stakes crimes involving military personnel, national security and the mysteries of the sun-drenched island paradise itself. Matt Bosack, Jan Nash and Christopher Silber serve as executive producers for CBS Studios. Larry Teng is an executive producer and directed (initial episode only) from a script by Bosack, Nash and Silber.