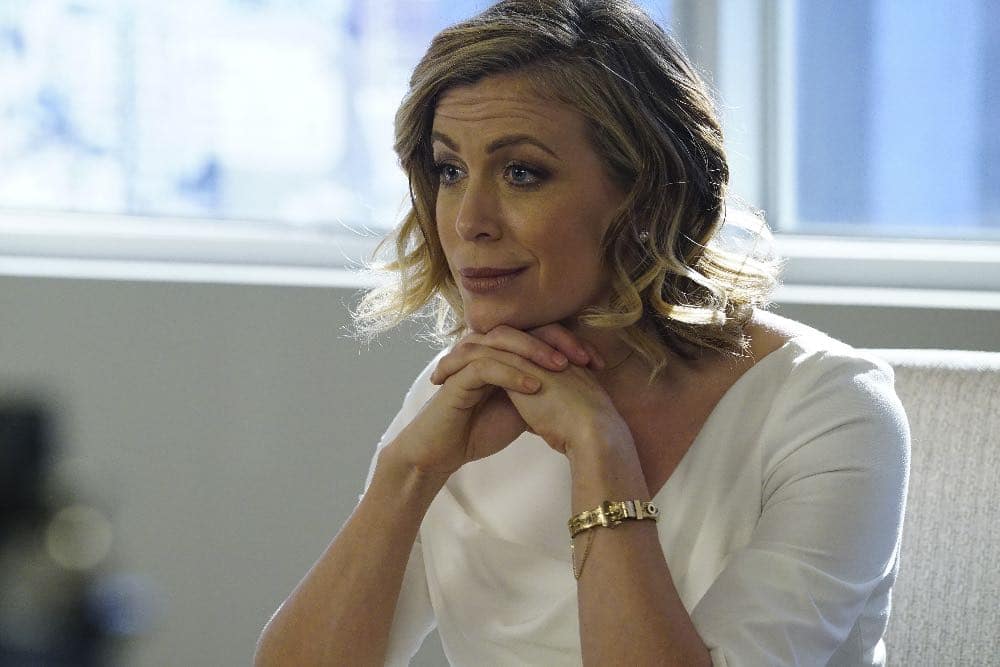 Known for a variety of television roles ranging from ABC’s LOST and FLASHFORWARD to Starz’s POWER to NBC’s PARENTHOOD to USA’s COMMON LAW to Fox’s SARAH CONNOR CHRONICLES, Sonya Walger has brought a multitude of memorable characters to life. In ABC’s drama series THE CATCH, Sonya brings keenly honed skills to screen and makes her character Margot Bishop so much more than a scorned lover or arch-nemesis. In fact, her vivacious and cunning portrayal humanized Margot so that viewers feel conflicted every time she appears. Are we supposed to love or loathe Margot? That is the question. It is to Sonya’s credit that we root for Margot, no matter how dastardly her deeds. In an exclusive interview, Sonya teases what Margot is up to in Season 2 of THE CATCH and shares a bit of what has been rewarding for her so far in her illustrious career.

What drew you to the role of Margot Bishop in the series THE CATCH ?
SONYA: It was a great opportunity to work with incredible actors like Mireille [Enos] and Pete [Krause]; I honestly had no idea how magnificent a character Margot would become when I signed on. I had lunch with Allan Heinberg (our showrunner) who promised great things for her, but you never know really what you’ve signed up for until the scripts start coming in. And it’s been such a great surprise.

What do you most admire and/or like about her?
SONYA: I love how she answers to no-one, doesn’t change who she is or what she cares about for anybody else; she is unapologetically empowered, sexual, and goes after what she wants. I love that she’s nobody’s wife, or supportive girlfriend, or long-suffering therapist. I love that she’s entirely her own woman.

What journey does Margot undertake in Season 2?
SONYA: I think she has to dig pretty deep in season 2 and finds herself in several roles I don’t think she ever imagined herself cast in. It demands a vulnerability of her that I don’t think she’s ever had to show before.

Margot’s love life has been fluid on the show. Any hints or teasers you can share about what is in store in the romance department for Margot this season?
SONYA: Ummm, ‘fluid’ is one word for it…. Complicated, unexpected, passionate and not something you see coming…

How would you describe Margot’s relationships with Ben and her brother Rhys when we see all of them again at the beginning of Season 2?
SONYA: Fraught, I would say. They’re having to reinvent themselves from nothing while she’s having to consolidate herself as sole leader of the Kensington Firm. So they all have their hands full…

Is Margot having regrets as to taking on the family business all on her own when we see her again?
SONYA: Regrets? Margot? She doesn’t know the word.

What kinds of adventures can you tease for Season 2 for Margot, Ben and Rhys?
SONYA: Their adventures, at least for the first half of the season, are happening separately – they’re all on their own course at the outset, all trying to get used to their new realities. Margot’s main concern is her safety, while the others have to get back on their feet again…

Does Margot still have Alice in her sights and will kill her at any opportunity she is given?
SONYA: Margot has to rethink her whole relationship to Alice pretty quickly…

What has it been like working with Mirielle Enos, Peter Krause and John Simm?
SONYA: Just the most enormous pleasure. Ours really is the most harmonious, easy-going set. Mireille is such a talent, it’s so fun to work opposite her, not to mention we’re both mamas of two little kids so we spend a lot of time comparing notes on sleeplessness and juggling work with home life. Pete is funny and charming and such a pro. And I think John Simm may have been my brother in a past life – I just adore working with him and he’s as big a reader as I am so we’re invariably huddled over a list of book recommendations.

What is your favorite part about working on the show?
SONYA: This role is no question one of my favorite I’ve played. It’s all good, shooting in LA and not having to relocate, wicked fun scripts, glorious costumes, glam hair and make-up, funny, warm cast members, great scripts from a wonderful show-runner – I could go on but it will sound fake!

What has been one thing you have taken away from working on THE CATCH so far?
SONYA: That work can be so, so much fun.

What do you hope viewers take away from watching the second season?
SONYA: That this show is so unexpected, so fun, such a ride and so incredibly unforeseeable.

At this stage of your career, what do you think you have learned from the amazing variety of roles and projects you have worked on?
SONYA: I’m just so grateful to have had the opportunity to work on such diverse roles, and on such great shows. I’m not sure what I’ve learned, except that there’s no knowing what lies ahead.

Then what are the perks of where you are in your career right now?
SONYA: Mostly I’m grateful to be on a show that shoots in L.A. so I can come home to my family every night and not have to relocate them anywhere.

If there were one role you would like to revisit, which would it be and why?
SONYA: Great question! I’d go back and do my very first role, Donna in “Mind of the Married Man” (HBO) again. I was 26 when I played her, never been married, never had kids, don’t think I was even in a relationship and was playing a married mother – I’d love to have another go at that one. Also it was a show I loved, about a topic that I think needs revisiting.

Has there been any great advice you have gotten?
SONYA: So much. I just have a terrible memory. Alan Rickman told me “They pay you to wait. The acting comes free.” That’s worth remembering at 3 a.m. when you’ve been sitting in your trailer for 10 hours waiting to go to set.

What advice would you offer to other upcoming and aspiring actors?
SONYA: Stay alert. By which I mean, keep signing up for classes, workshops, play-readings, radio plays. Whatever it takes. Stay juicy, stay engaged, make a movie on your iphone, write, go to therapy, stay curious about yourself, your creative life. Do not just wait for the next audition to come in. Write, produce, sing, find an outlet. And be patient.

Do you have any current or upcoming projects that you can share that fans should keep an eye out for?
SONYA: I did a movie with Clive Owen called “ANON” that I think comes out this summer? And an indie called “Be My Baby” which is on the festival circuit. And an episode of season 3 of BLOODLINE but not sure when it airs. Sorry not to have more dates!

To see what wicked and complex situation Margot finds herself in when the second season returns, be sure to tune in for the Season 2 premiere of THE CATCH on Thursday, March 9th on ABC. Then to see more of Sonya’s great work, also keep an eye out for the premieres of Season 3 of BLOODLINE on Netflix and the films “ANON” and “Be My Baby” coming later in 2017.