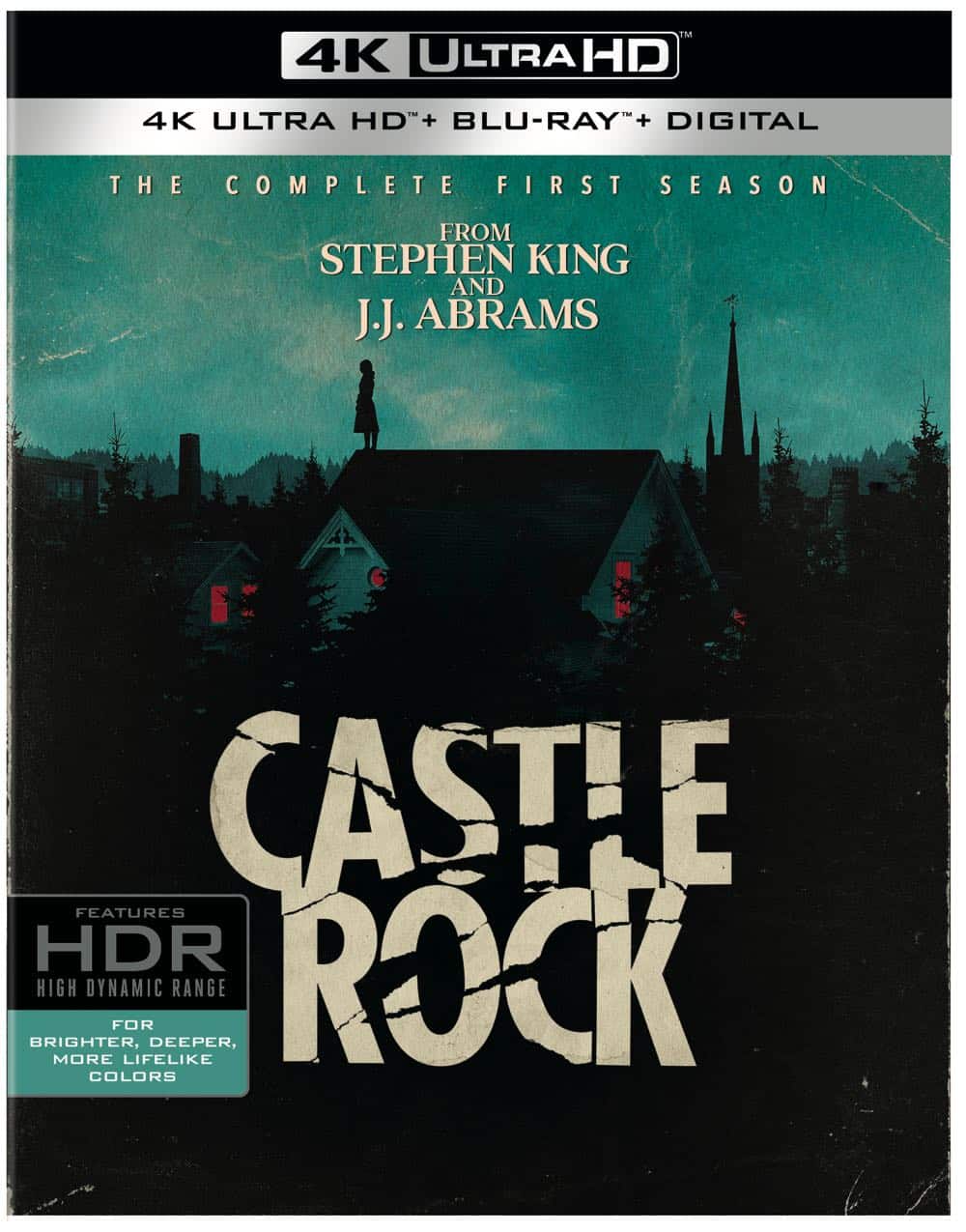 Welcome to Castle Rock, the small rural town carved out of the deepest woodland in Maine, in which many of acclaimed, best-selling author Stephen King’s most-loved works of fiction come to life. This forgotten little town is now the setting of one of television’s newest original series, Castle Rock. Warner Bros. Home Entertainment will release Castle Rock: The Complete First Season on 4K Ultra HD™ ($44.98 SRP), Blu-ray™ ($29.98 SRP) and DVD ($24.98 SRP) on January 8, 2019. Consumers will be able to own all 10 episodes of the horror series’ exciting debut season along with exclusive bonus features. The 4K Ultra HD™ release will include Blu-ray as well as a Digital Copy of the series. The Blu-ray™ release will feature a Digital Copy of the series.

The first season of Castle Rock, from Bad Robot Productions in association with Warner Bros. Television, will be available to own on Digital October 15, 2018. Consumers can enjoy all 10 episodes in high definition and standard definition (retail $24.99/$18.99) along with never-before-seen bonus content.

From Stephen King (Mr. Mercedes, It, 11.22.63) and J.J. Abrams (Star Wars: The Force Awakens, Westworld, 11.22.63), Castle Rock is a new psychological-horror series set in the Stephen King multiverse. Castle Rock, which first premiered on Hulu, is an original story that combines the mythological scale and intimate character storytelling of Stephen King’s best loved works, while weaving an epic saga of darkness and light that’s played out on a few square miles of Maine woodland. Castle Rock has been picked up for a second season on Hulu.

The first season of Castle Rock follows Henry Deaver (André Holland, American Horror Story), a Death Row attorney who returns to Castle Rock, Maine, his hometown, after he receives an anonymous phone call from the infamous Shawshank State Penitentiary. The call is about a nameless young man (Bill Skarsgård, It) who is found locked in an underground cage that’s located in a long-abandoned cell block beneath the prison. Upon his discovery, the mysterious young man, with a sinister and unnerving presence, whispers Henry’s name. Curious about how and why someone left this boy imprisoned, Henry is drawn into the case and attempts to help him. But there are reasons why “The Kid” was imprisoned. And reasons why he should never be set free.

Permeated with a sense of foreboding and dread, the haunting small town of Castle Rock is not willing to let Henry leave. Aside from now having to deal with the strange young man found in the prison, Henry is faced with the fact that his adoptive mother (Sissy Spacek, Carrie), who lives in Castle Rock with retired Sheriff Alan Pangborn (special guest star Scott Glenn), is struggling with the onset of dementia. Reluctantly, Henry stays to figure out just who “The Kid” is and how he wound up imprisoned under such appalling circumstances.

“Castle Rock is a riveting and compelling psychological thriller based on elements of Stephen King’s most iconic works, beautifully shot and acted by an all-star cast,” said Rosemary Markson, WBHE Senior Vice President, TV Marketing. She added, “We’re thrilled to release this exciting new series in stunning 4K UHD with HDR in addition to Blu-ray, DVD and Digital – all with newly created bonus content to take consumers deeper into the making of the show. This is a release that both hardcore Stephen King fans and more general genre enthusiasts will want to add to their collections.”
Castle Rock is based on characters and settings created by Stephen King. The series was created by Sam Shaw (Manhattan, Masters of Sex) and Dustin Thomason (Manhattan, Lie to Me) who serve as executive producers along with J.J. Abrams, Stephen King, Ben Stephenson (Westworld), Mark Lafferty (Genius, Manhattan, White Collar) and Liz Glotzer (The Good Fight, The Shawshank Redemption). The series is from Bad Robot Productions in association with Warner Bros. Television.

Stephen King is one of the world’s most prolific authors, having published over 50 books in an illustrious career that spans more than 40 years. His works have been adapted for theatrical motion pictures and television more than 50 times.

The first season of Castle Rock will be available to own on Digital on October 15, 2018. Digital purchase allows consumers to instantly stream and download all episodes to watch anywhere and anytime on their favorite devices. Digital movies and TV shows are available from various digital retailers including iTunes, Google Play, Vudu, and others. A Digital Copy is also included with the purchase of specially marked Blu-ray & 4K Ultra HD discs for redemption and cloud storage.