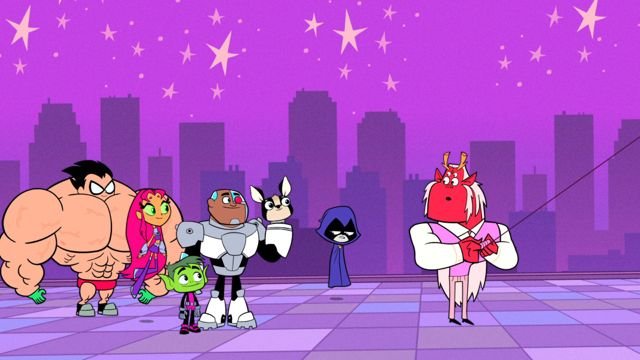 Cartoon Network announced today it has picked up a second season of Teen Titans Go!, the new half-hour animated comedy series from Warner Bros. Animation.  Since its premiere on the network in April, Teen Titans Go! has been a viewer favorite averaging more than 1.7 million total viewers (P2+) per telecast. In addition, the series is the #1 program (excluding movies) on Tuesday on all TV among kids 2-11, 6-11 & 9-14 and boys 2-11, 6-11 & 9-14. Ratings for the series have outpaced its lead-in and prior four-week benchmarks by double-digits with all key kids and boys, and year-ago time period results among Kids/Boys 9-14.

A reimagining of the beloved Teen Titans series based on the characters from DC Comics, which also aired on Cartoon Network, Teen Titans Go!  stars the original principal voice cast, along with a remixed theme song by legendary DJ and Beastie Boys member Mix Master Mike. Season one is currently airing and new episodes will continue to premiere on Tuesday nights at 7:30 p.m., with Johnny Test at 7:00 p.m. and The Looney Tunes Show at 8:00 p.m.

The character-driven comedy series Teen Titans Go! focuses on the funny that happens in between saving the world and living together as teenagers without adult supervision. The comedic mayhem of the animated series is punctuated by pranks and the occasional need to fight crime, but it will also deal with the everyday issues of adolescence. With epic staring contests to decide who does the laundry, a series of quests and battles to construct the perfect sandwich or fighting crime in Jump City, one thing is for sure, these Titans will always be ready for an adventure inside the house and out.