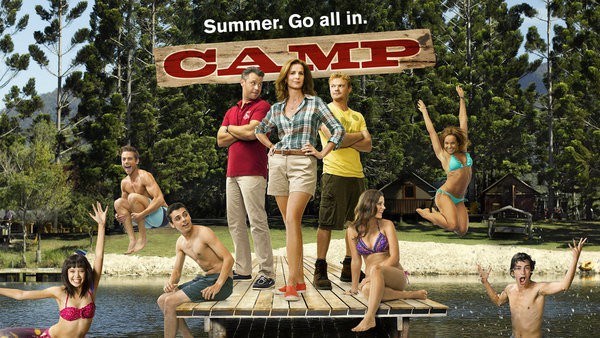 NBC has embraced the summer with the new series CAMP, which premiered this week. Mack (Rachel Griffiths, Brothers & Sisters) is now a single mother and the sole runner of a failing family camp. While she figures herself out, she has to keep the business running and help others, including her son, Buzz (Charles Grounds), and his teenage friends and fellow counselors.

The setting is pretty much the classic image of a summer camp, though there are also adults hanging around. While never having attended such a place myself, nor knowing anyone who has, this is a very familiar environment thanks to countless television shows and movies. Yet, it seems a ripe premise for a light-hearted drama, one that hasn’t been explored quite in this manner, and a totally fitting subject for broadcast networks to delve into if they want to make a play for programming the warmest months.

The focus of the story is on the adults, mainly Mack, and a bunch of young adults or teenagers (some of their ages aren’t completely clear) who work at the camp. This seems like a good pool to draw from because these are the people who stick around, while campers come and go. We don’t really see them doing much work, of course, but it’s an interesting and camera-friendly group.

I do like that the central group avoids stereotypes, impossible to pigeon hole the roles as “jock” or “cheerleader” or “nerd.” It would be so easy to slip into the social stigmas prevalent in this particular age bracket, but while the rival camp across the pond is two dimensional and cartoonish, the principal players are each fully realized individuals, with multiple facets and functional personalities.

Most of the cast is fresh and generally unknown, save Griffiths, who has starred in several shows. By bringing in fresh faces, CAMP avoids preconceived ideas about its characters. None are bad, giving us realistic portrayals of typical kids, though none stand out as super talented either, which admittedly could just be due to the material. They are suitable stock for a summer show, which is truly an ensemble piece, rather than focusing on just one or two of them.

We have Buzz, of course, who is at the age where he really desires to get with girls, but isn’t attractive or charismatic enough to rate their attention, at least not the ones he shamelessly drools over. He, as one would expect, doesn’t notice that there is an average girl, who is in his league, named Grace (Charlotte Nicdao) available. Once he does, and we know that he will eventually, even if she has to get his attention in a big way, they will be perfectly happy together.

Buzz quickly bonds with new kid Kip (Thom Green), whom we learn late in the first hour has struggled with leukemia. Kip is quiet and likes depressing documentaries, and being at the CAMP will help him to come out of his shell and live his life again, or possible for the first time. This will be accomplished in two main ways, one by sharing a cabin with Buzz, who finally gets away from his mom, and two by hanging out with Marina (Lily Sullivan), a down to earth girl scorned by the popular kids, but sure to be liked by viewers.

Rounding out the younger group are Sarah (Dena Kaplan) and Robbie (Tim Pocock). Although they have been an item every summer for the past ten years, they don’t talk during the school year. Robbie is ready for more and enrolls at Stanford, the school Sarah attends. Sarah, going through a rebellious phase after losing her swimming scholarship, fools around behind Robbie’s back with Miguel Santos (Juan Pablo Di Pace), an author at the lake trying to find inspiration.

The biggest problem I have with CAMP is that both Robbie and Sarah have read Miguel’s book and are familiar with his work. What are the chances of that? Unless he’s a best-selling writer and they are avid readers, neither of which is established. As such, the premise is the most hokey of the series.

Over all, though, the story is tame and bland. It’s not bad as a series to watch when nothing else is on, certainly a step above reality swill. But while NBC, ABC, CBS, and FOX’s offerings may be lacking right now, there are amazing, deep, rich dramas airing on cable that are far, far better than CAMP. For the very casual television viewer, CAMP will serve a purpose. For anyone interested in TV enough to find and read this article, just keep your expectations low and it will be pleasant-ish. Unfortunately, ‘pleasant’ doesn’t feel like a compliment given the other available offerings.

The biggest regret is the way CAMP wastes Griffiths. Her tale, upset over her husband running off with a young foreigner, having hate sex with the rival camp owner (Rodger Corser), and being adored by a far-too-young counselor / handyman named Cole (Nikolai Nikolaeff) is moving and sweet enough, but with her resume, Griffiths can and should do better. I don’t know why she isn’t on another premium cable show, but that’s where I hope she ends up after the single season of CAMP that is likely to run.