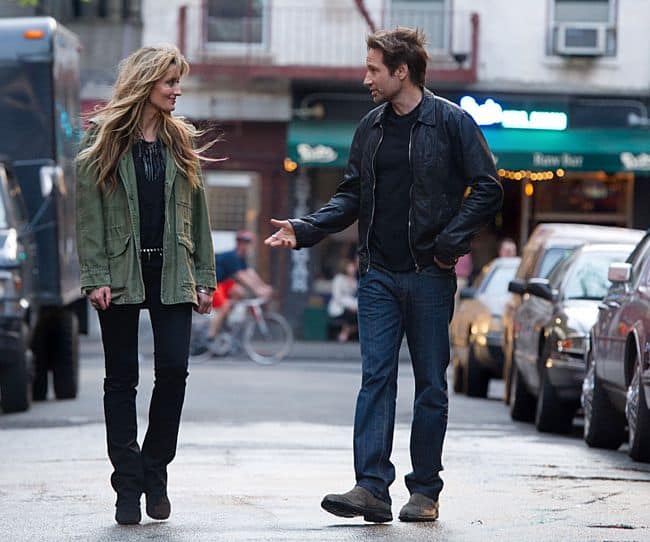 Showtime’s CALIFORNICATION comes back to “The Unforgiven.” Hank (David Duchovny) wakes up after spending several days slipping in and out of consciousness. He learns that he is in the hospital because of Carrie’s (Natalia Zea) suicide-murder attempt, which only succeeds on one count.

This is Hank as we have never seen him before. He is self-loathing, yes, but now he has the guilt of Carrie’s death on his head. Or, assumed death, as she is on life support, and will likely die once the plug is pulled. Carrie is a crazy psycho, to be sure, but if it wasn’t for Hank, would she have been driven to take such extreme measures?

One would like to think that yes, whoever Carrie had been dating would be the victim, and Hank deserves none of the blame. This is not what Carrie’s friends and family believe, which is unfortunate, as they should know her better than anyone, but it is definitely the thought that Hank’s loved ones cling onto.

The problem is, Hank has never been big about listening to others. And despite his sins, he has a very strong moral compass as to how he treats women. He tries to never degrade them, or make them feel down on themselves. His whole schtick, which is what gets him laid so much, is building up a woman, making them very special, a skill that he excels at. Sadly, he fails to do that for Carrie, at least, fails to do it enough, and so he takes her actions very much to heart.

Viewers of CALIFORNICATION are treated to a look inside of Hank’s mind in “The Unforgiven.” In the hospital, and after, as he drinks himself into a stupor every night, we see Hank dream about his time with Karen (Natascha McElhone). But every time Hank is heading towards a happy place, Carrie invades the scenario, screwing things up, pulling Hank back towards the pain. Hank wants to be happy, but refuses to let himself, thinking he is not deserving.

As is typical for Hank, when he hates himself, he cares little about what happens to him, physically. The flaw in his attitude of caring for others is that he doesn’t consider the fact that hurting himself might hurt them, too. The incessant alcohol intake is ruining his physical and emotional state, but it’s also making Karen, Becca (Madeleine Martin), Marcy (Pamela Adlon), and Charlie (Evan Handler) miserable.

That is why they stage an intervention. It’s a crappy effort, because everyone in the group has plenty of their own issues that prevent them from being completely there for Hank. However, it’s the dysfunction that has brought them together as a group, and is the basis for their love for one another. Thus, their attempt is enough, in my book, and it does succeed in its drive.

I think, of all of Hank’s friends, Charlie is the one who takes the situation the least seriously. This may be because Charlie is used to Hank’s ups and downs, and looks up to him. Charlie assumes that Hank doesn’t need to give up alcohol completely, and should put himself back in the line of temptation if it means a good job. In this case, Charlie wants Hank to help rock star Atticus Fletcher (Tim Minchin) turn A Crazy Little Thing Called Love into a rock opera.

I feel like Charlie’s actions will jeopardize any healing that Hank may embark upon. We’ve seen before how Hank gets when living the rock star lifestyle, and while Hank was able to break away once, he’s far less strong, emotionally, than he was before. Charlie may have good intentions, but his efforts could be the thing that keeps Hank floundering all season.

And we need Hank to get better. Karen needs him, after this way-too-long, on-again-off-again thing between them, she is still in love with Hank. Becca needs him, as she is thinking of pursuing the writing career, following in her father’s footsteps, which may not be the best idea, especially if she shares his judgment. She’s also finally joined the adult cast, and this is a critical time in her development, moving into a new stage of life. Marcy needs Hank, to talk her up so that she doesn’t go back to the cheating Stu Beggs (Stephen Tobolowsky).

Bottom line, Hank has to get better, and as of “The Unforgiven,” it looks like he may need to ditch Charlie to do so, something Hank surely won’t do in his present state, especially after Charlie took a bullet for him in last year’s finale. Which means that we’re in for another glorious, rocky season of CALIFORNICATION, airing Sundays at 10:30 p.m. ET on Showtime.