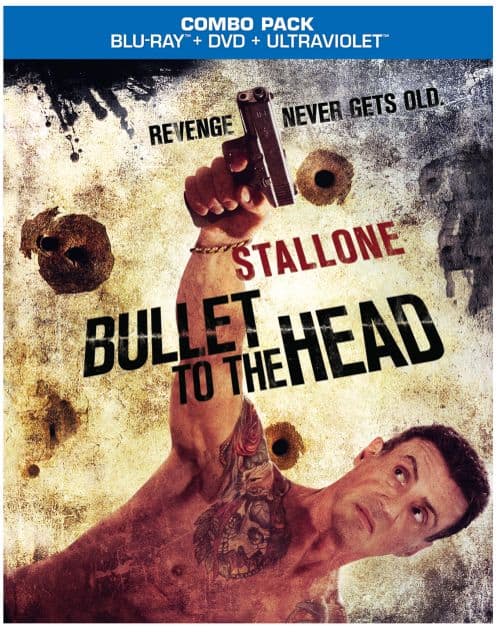 Blood will boil and revenge will be sought as “Bullet to the Head” arrives onto Blu-ray Combo Pack and Digital Download on July 16 from Warner Home Entertainment Group. Starring the legendary Sylvester Stallone, “Bullet to the Head” follows the unexpected alliance of a New Orleans hit man and a by-the-book Washington D.C. detective on a thrilling quest for payback.

Based on Alexis Nolent’s French graphic novel, Du Plomb Dans La Tete, “Bullet to the Head” tells the story of a New Orleans hit man (Stallone) and a DC cop (Kang) who form an unlikely alliance to bring down the killers of their respective partners.

·         Bullet to the Head: Mayhem Inc.: Get ripped with Sylvester Stallone as he blasts his way through gun training and action choreography as he preps for a bone-crushing axe fight.

On July 16, “Bullet to the Head” will be available for download from online retailers including iTunes, Xbox, PlayStation, Amazon, Vudu and CinemaNow.

The film will also available digitally in High Definition (HD) VOD and Standard Definition (SD) VOD from cable and satellite providers, and on select gaming consoles.

*UltraViolet allows you to collect, watch and share movies and TV shows in a whole new way.  Available with the purchase of specially marked Blu-ray discs, DVDs and Digital Downloads, UltraViolet lets you create a digital collection of movies and TV shows.  Services such as Flixster and VUDU allow you to instantly stream and download UltraViolet content across a wide range of devices including computers and compatible tablets, smartphones, game consoles, Internet-connected TVs and Blu-ray players.  Restrictions and limitations apply.  Go to ultraviolet.flixster.com/info for details.  For more information on compatible devices go to wb.com/ultravioletdevices.