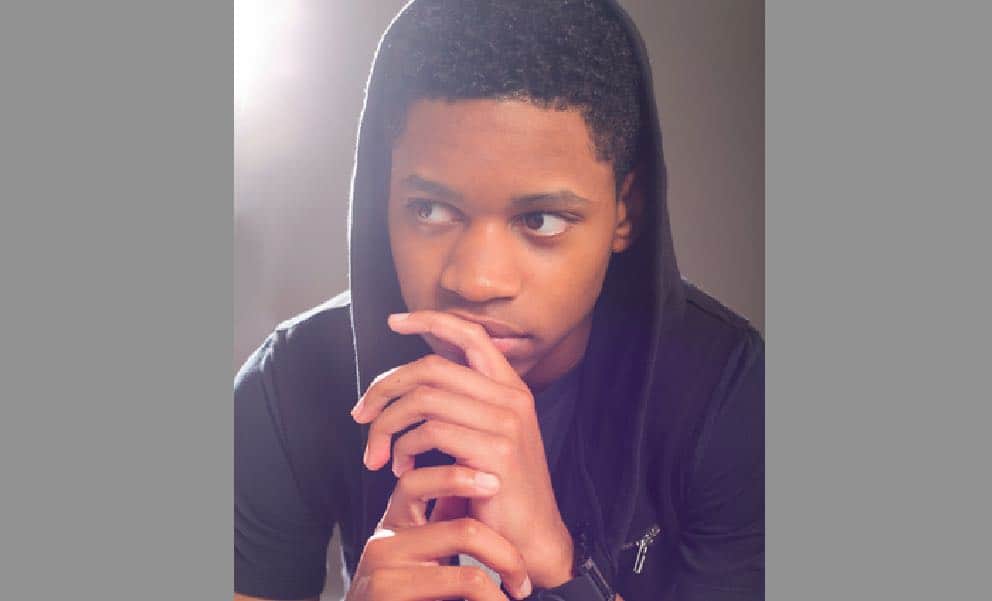 In the IFC comedy series BROCKMIRE, the world of a fictional, disgraced baseball announcer brings together a hilarious trio determined to raise his falling star and elevate their careers in the process.  In BROCKMIRE, Tyrel Jackson Williams co-stars alongside Hank Azaria and Amanda Peet. Simply put, the comedy series shines with energy, enthusiasm, and an appealing warmth.  It is Tyrel’s character Charles, who is the one who knows are the ins-and-outs of social media integrated with modern technology as a way of engaging the baseball fans and rehabilitating the image of both the team and its new announcer, that gives the show its beating heart– and a lot of credit for that goes to Tyrel’s performance. Tyrel is not only funny, he conveys a humanity that makes us care about these characters and their outrageous life situations.  In an exclusive interview, Tyrel talks about the fun he is having working on BROCKMIRE and where he is at in his career right now.

What initially appealed to you about the role of Charles and working on BROCKMIRE?
TYREL:  I read the pilot and was hooked immediately. Right after I read the last word, I sent and email to my manager saying something along the lines of “This pilot rocks! I need to be a part of this show!”

How would you describe who Charles is?
TYREL:  He’s the tech wiz of his hometown, which isn’t really saying much. He’s someone who’d fit right in in a big city who can’t seem to escape the small town he was born in. I guess that’s why Jim has such a big impact on him. Jim’s this crazy, broken person from a world he’s never seen before but wants to be a part of.

What do you like and admire about Charles?
TYREL:  Charles has a specific plan for his life and is trying to achieve his goals without sacrificing who he is. He definitely is taking advantage of the opportunities Brockmire brings him, but he tries not to take advantage of him. I really admire that.

What has been the one thing you as an actor have taken away from working on BROCKMIRE?
TYREL:  If everybody shows up prepared, you can do the impossible. We were working at a very rushed pace, but everybody brought their A-game, and we ended up making something really great.

What do you hope viewers continue to take away from watching BROCKMIRE?
TYREL:  An intense knowledge of baseball and baseball history isn’t necessary, but it is helpful. You can watch this show knowing almost nothing about baseball and still be entertained.

What has been your favorite part about working on this project?
TYREL:  Honestly… Being able to improv without worrying about whether what I was saying was family friendly. I love having fun on set with talented people, and there were quite a few things I just couldn’t do on Disney. Now, the gates are open.

What is it like working alongside Hank Azaria and Amanda Peet?
TYREL:  Amazing. There’s no other way to put it. Hank and Amanda are extremely talented, professional and just nice people in general. Genuinely, one of my favorite acting experiences thus far.

What have been some of your favorite scenes to work on?
TYREL:  The “high on the baseball field” scene holds a very special place in my heart. Sprinting top speed around a baseball field at 10pm was pretty fun way to end the day.

Who makes you laugh the most on the show?
TYREL:  Amanda. She was like my replacement mom on set. Since I played a social media expert, Amanda had plenty of questions about social media platforms she’d heard of, but didn’t know much about. It was always funny to hear Amanda yell “Is this a meme or a gif?” in between takes.

What has surprised you most about your career so far?
TYREL:  How consistently I’ve been working. Being an actor full-time doesn’t work out for most people, but I’ve been blessed to be able to support myself with my work so far. It’s a beautiful thing.

At this stage of your career, what do you think you have learned from the roles and projects you have worked on?
TYREL:  I think the biggest lesson I’ve learned is, by the time you’ve made it on set, there’s no need to prove yourself. I always get really nervous walking onto a new set. There’s this feeling that I get that’s like “I have to show everyone I deserve to be here,” when, in reality, if you’ve booked the role, then you deserve to be there. Your job is just to show up and do your best. That’s helped me a lot with nerves and allowed me to have more fun with my performances.

What are the perks of where you are in your career right now?
TYREL:  I’m at a place where my reputation is starting to precede me. There are a few actors/directors/etc. who’ve seen and enjoyed my work. That continues to blow my mind. I try not to pay attention to how my projects do/are received, for my own good. Because of that though, I can be blissfully unaware of whether people know I exist. It’s a nice surprise when it happens.

If there were one role you would like to revisit, which would it be and why?
TYREL:  If I could, I’d love to re-create “Failure to Launch” just to work alongside that cast again as an adult. I was eight when the movie was shot, so I didn’t really understand who the people I was working with were. I mean, Matthew McConaughey, Sarah Jessica Parker, Bradley Cooper, KATHY BATES! I’d be over the moon.

Do any of your characters and the situations they find themselves in ever leave a lasting impression on you?
TYREL:  Sometimes they do! I’ve played a lot of nerds and socially awkward characters, so I usually use them as an example of what not to do in certain situations.

Has there been any great advice you have gotten?  What advice would you offer to other upcoming and aspiring actors?
TYREL:  The best advice I’ve ever gotten was to treat auditions like opportunities to do what you love and not to treat them like job interviews. Walking into an audition with the intention of having a good time and simply doing your best takes all of the stress out of the process and makes the whole endeavor more enjoyable. Sometimes it’s helpful before you go in to imagine that you were just told that you didn’t get the job. That way you can just do the scene without that “please, hire me” feeling.

Do you have any other upcoming projects that you can share that fans should keep an eye out for?
TYREL:  There a few things incoming that I can’t say much about, but until then, I did a few episodes of NOBODIES on TV Land that fans can check out.

To see more of Tyrel’s delightful performance in BROCKMIRE, Season 1 is available for viewing at IFC’s website: http://www.ifc.com/shows/brockmire  Then look for Season 2 of BROCKMIRE to air in Spring 2018. He is also appearing in the TV Land series NOBODIES, which airs Wednesday nights at 10:00 p.m. Current episodes and clips of NOBODIES can be seen online at: http://www.tvland.com/shows/nobodies  Tyrel can also be found on Twitter @Tyreljwill  Follow him there for updates on his career.