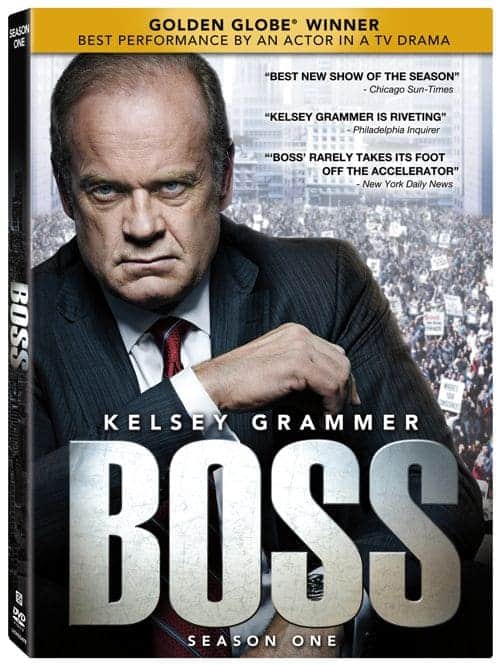 Seat42f and Lionsgate have teamed up to give THREE lucky winners a copy of BOSS Season 1 on DVD. For a chance to win leave a comment below telling us why you want to add BOSS Season 1 to your DVD collection. Only one entry per person. Contest ends July 31st. Winners will be notified on August 1st via email so make sure to use a valid email address when you post your comment.

Kelsey Grammer gives an electrifying performance as Tom Kane, the ruthless mayor of Chicago, who will go to great lengths to get the job done – even if it means being involved with fraudulent activity. While Kane struggles to run the city, he must also keep a secret under wraps that could ruin his career. The Philadelphia Inquirer described Grammer’s performance as “riveting,” and HitFix praised his role on the show as “mesmerizing.”

Boss: Season One also stars Connie Nielsen (TV’s “Law &amp; Order: Special Victims Unit”), Hannah Ware (Shame), Jeff Hephner (TV’s “The O.C.”) and Kathleen Robertson (TV’s “Beverly Hills, 90210,” Hollywoodland), the 2-disc Blu-ray set and 3-disc DVD set contains all eight episodes in addition to special features including episode commentaries as well as a featurette, “The Mayor and His Maker” with Kelsey Grammer and Farhad Safinia. The Blu-ray and DVD sets will be available for the suggested retail price of $39.97 and $39.98, respectively.