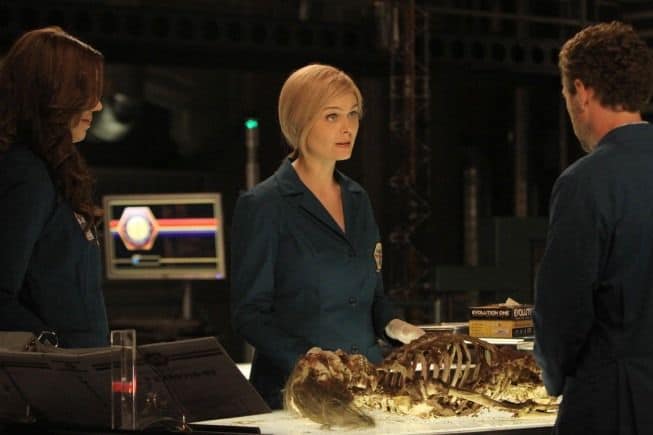 BONES is back! Not just the series, which returns to FOX this week, but also the character affectionately nicknamed Bones by her partner, Dr. Temperance Brennan (Emily Deschanel).

The eighth season premiere, “The Future in the Past,” begins months after last spring’s finale. Brennan is still on the run with her baby, Christine, and father, Max (Ryan O’Neal), and she has been replaced at the Jeffersonian. But she hasn’t just been hiding. Instead, she has found one of Pelant’s (Andrew Leeds) early victims. She leaves clues for her old gang to find, and works discretely to help them in the goal of clearing her name and taking down a true monster.

As sad as it is to see Brennan’s office redecorated, it’s cool that one of her own interns, Clark (Eugene Byrd), gets the promotion. Sure, there is some push back by the rest of the staff, who don’t want to adopt his binder system. But at least he’s one of their own. It could have been some selfish outsider who wants to do things their own way, and would resist giving up the job if Brennan re-emerges. This would have been predictable and boring. With Clark, he takes his more experienced co-workers’ flack with grace, and works diligently to help Brennan, even if that means losing his prime spot. I’m not sure every squintern could have done as well in this situation.

Everyone on the team helps in their own way. The one who is the most fun to watch this week is Cam (Tamara Taylor). As the boss, she can’t act as openly in Brennan’s interests as everyone else. That doesn’t mean that she is an obstacle, though. She gets out of their way, even when she knows they are blatantly going against the rules and the law, and even stirs up a bit of mischief when she thinks she can get away with it. She’s really come a long way since joining the cast, and this attitude cements her as a humorous and important character.

These two character shifts, more than anything else, change the dynamics in the group. With Brennan in command, everyone is focused on a specific goal, and while they have quite a bit of freedom, their activities are pretty structured. Since Brennan is gone, Cam can’t lay the hammer down, and Clark has no desire to make friends into enemies, there is a wildness in this episode not usually present in the series. Characters keep secrets from one another in order to protect everyone, but it also strains relationships as loyalty and trust are tested. It’s a great, solid way to build a story, and it keeps things interesting eight seasons in. Better yet, we finally get to see just how smart and capable these people are individually!

It’s too bad as it’s not going to last. I won’t spoil the ending of the episode by revealing if Brennan’s name is cleared yet, or if things return to normal. But as a formulaic procedural, every fan knows that this is exactly what will happen, sooner rather than later. BONES is allowed to stray a bit from the weekly structure because its long tenure and high ratings have earned it the right to do something bold every once in awhile. But it refuses to change the foundation of the series because that could drive away long-time viewers, so status quo will be restored.

That being said, it’s still entertaining to explore various changes. Booth (David Boreanaz) is not only is missing his family, he’s been demoted. Flynn (Diamond Reed) is an intriguing new element, taking Booth’s spot, and proves to be a person whose motivations are hard to pinpoint. Ms. Julian (Patricia Belcher) is still suspended, which might make her a tad grumpier than usual. Angela (Michaela Conlin) is more determined than we’ve probably ever seen her. All of these things add up to make “The Future in the Past” special.

In “The Future in the Past,” we discover something very shocking about Hodgins (T.J. Thyne). Hodgins is many things, but a dangerous or violent man is not one of them. How much can a person take before being pushed to their breaking point? What is a good man capable of when people he cares about are threatened? This episode not only opens the door on a fresh side of the character, but also asks some tough questions, and exposes who Hodgins is at his core.

Another plot point of note is when Booth needs someone he can trust to offer protection when he can’t, he calls Sweets (John Francis Daley). The mind doctor has often lived up to his last name, and the relationship he has built with Booth is touching. The season premiere really tosses that in a different light, stripping away the goofiness and the ribbing to reveal what Booth really thinks of Sweets. Moments like these define a series, and this is merely one example of the strong emotions that bond the entire central cast.

Also, it must be said that BONES picks fantastic music! When a perfect song is needed for just the right moment, the series delivers, and this episode is no different.

All of this praise might make one think that the episode is perfect. It isn’t quite there, of course. The most glaringly obvious mistake is the wig that Emily Deschanel is forced to wear in this episode. Yes, it’s supposed to be hair dye, but it’s pretty obviously a fake, and an unattractive, poorly made one at that. Surely BONES could have spared a little budget to give its lead some decent hair?

Overall, BONES remains arguably the best procedural on television. The smart writing and brilliant ensemble raise it a notch above other case-of-the-week shows, and at times even put it up as a valid contender among those series that don’t stick to a formula. Eight seasons in, not only has the show lost nothing, it continues to grow better, adding more complicated situations, relationships, and villains. It won’t likely run for another eight seasons, but if it bows out anytime soon, it will do so at the top of its game, rather than just being put out of its misery.

This work is licensed under a Creative Commons Attribution-NonCommercial-NoDerivs 3.0 Unported License.