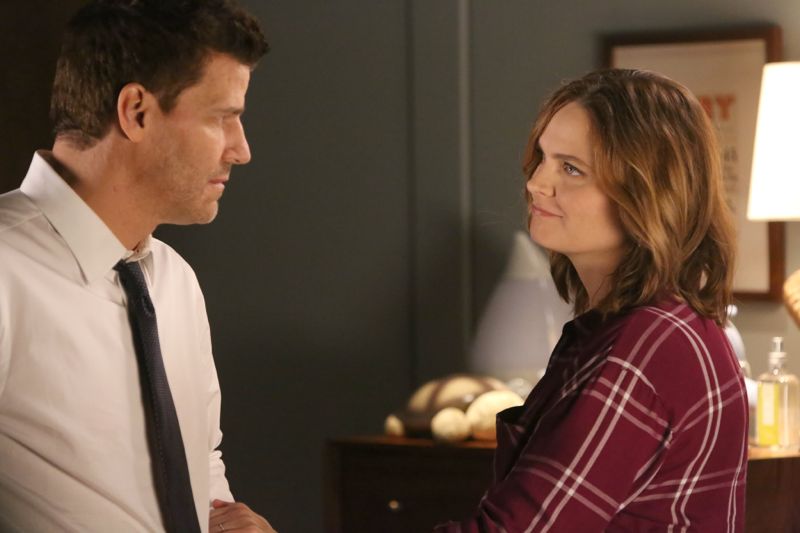 BONES, the long-running comedic procedural beloved by millions of fans around the world, will return for a final farewell 12th season on FOX, it was announced today by Dana Walden and Gary Newman, Chairmen and CEOs, Fox Television Group. The 12-episode run will celebrate the inventive series and bring the storylines of Brennan (Emily Deschanel), Booth (David Boreanaz) and the Jeffersonian-FBI team to a close, allowing the show’s loyal fans to say goodbye to these indelible characters.  When BONES ends its run, the series will have completed 246 original episodes, making it one of the longest running FOX series ever.

“In times like these, marked by instability and doubt, it’s comforting to know the world can count on at least one dependable beacon of stability. Apparently, that beacon is BONES,” said creator and executive producer Hart Hanson. “It just shows what you can do with an amalgam of genius cast, amazing crew, cunning writers, stalwart studio, sweat, a tough economy, a mercurial network, determination, luck, magic, miracles and the most loyal audience in the world.”

“This is for the fans! Thank you to everyone at Fox and, of course, Dana and Gary – for all your support,” said series star and producer David Boreanaz. “Thank you to Hart, Stephen, Ian [Toynton], Michael and Jonathan. Also to the crew and cast for their countless support along the way! And I couldn’t have done it without you, Emily!”

“I am thrilled the show will have the ending it deserves for all of our amazing, loyal fans!,” added series star and producer Emily Deschanel.

“We couldn’t be more thrilled to have another season, so we can give the show, characters and fans the end they so richly deserve,” said executive producers and showrunners Jonathan Collier and Michael Peterson. “Also knowing there is a Season 12, we can now write the most rewarding Season 11 finale possible – one we hope will leave our fans excited for what’s to come in this final season of BONES.”

“BONES has been part of the fabric of our network and studio for over a decade, and during that time it has attracted one of the most devoted fan bases we’ve ever seen.  So it was extremely important to us and to Hart, the producers and the cast that we send the show off in a way that gives those loyal fans a meaningful and satisfying conclusion,” said Walden and Newman. “We’d like to thank Emily and David for anchoring this extraordinary group of talented people, as well as Hart, Stephen Nathan, Barry Josephson and this season’s showrunners, Michael Peterson and Jonathan Collier, for delivering such an incredible series season after season.”

BONES returns for its spring premiere on Thursday, April 14 (8:00-9:00 PM ET/PT) on FOX. Picking up after the explosive fall finale, the all-new episode, “The Death in the Defense,” finds Hodgins (TJ Thyne) eight weeks into his rehabilitation and forced to navigate life in a wheelchair. Meanwhile, Brennan  and Booth investigate the death of a public defender who had multiple defendants from previous cases with motives to kill her.

In the series, Brennan, a highly skilled forensic anthropologist who works at the Jeffersonian Institute in Washington, D.C. and writes novels on the side, and her FBI partner, Booth, have taken on cases other law enforcement can’t solve and proven to be a formidable partnership, both at work and at home.  Over the course of the series, Brennan has devoted herself to her career, to Booth, with whom she’s had two children, and to her team at the Jeffersonian. They include best friend Angela Montenegro (Michaela Conlin), an artist who specializes in reconstructing facial features and crime scenes; Angela’s husband, Hodgins, a conspiracy theorist and expert on insects, spores and minerals, who is affectionately known as “the slime and bug guy”; Dr. Camille “Cam” Saroyan (Tamara Taylor), the street-smart and centered coroner; and Booth’s most recent colleague at the FBI, Special Agent James Aubrey (John Boyd), a young, intrepid FBI agent with a voracious appetite for solving crime, junk food and career advancement.

Utilizing a wide swathe of skills, and using human remains as their roadmap, this exceptional team has cracked some of the toughest cases to cross their lab tables and, in the process,escaped near-death experiences on multiple occasions. Inspired by real-life forensic anthropologist and novelist Kathy Reichs, the series also has explored more ways for human remains to have been discovered than ever thought imaginable.

With Brennan leading the way as the top professional in the field of forensic anthropology, BONES has inspired young girls around the world to consider a career in science. At the same time, having stacked up more episodes than the number of bones in the human body (206!), the series has helped viewers distinguish between the patella (kneecap) and the phalanges (bones in human fingers).