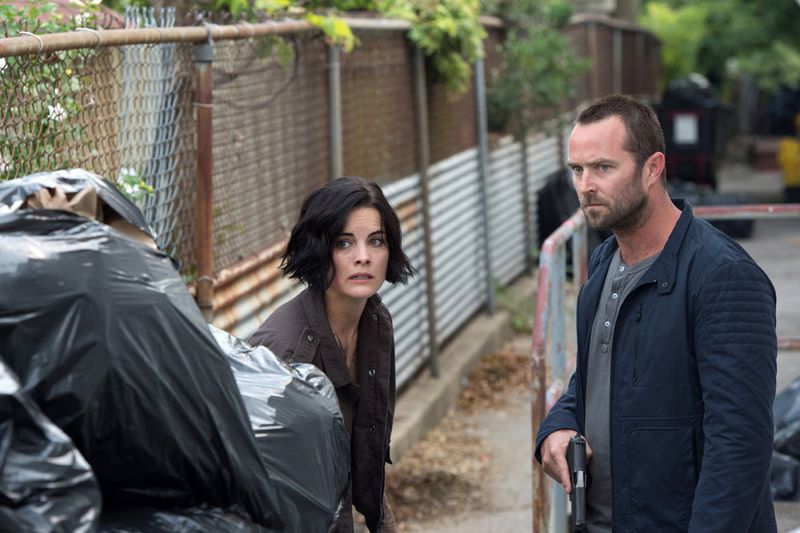 Going from one lightening hot action-show to another is no easy feat, but for star Sullivan Stapleton, he makes the move from Cinemax’s STRIKE BACK to NBC’s new drama BLINDSPOT look easy and seamless. Portraying FBI agent Kurt Weller, the man who has his name tattooed on the back of a young woman found without any memory in New York Times Square in a duffle bag is a fascinating role for any actor and it certainly seems that Sullivan Stapleton is having a grand time exploring the labyrinthine mystery around Jane Doe (Jaimie Alexander) and her possible connection to Weller.

In a recent press call, star Sullivan Stapleton talked about jumping into the thick of the action and slipping into the murky world of BLINDSPOT.

Much of the show is about figuring out who Jane Doe is and what her history is, yet we also find out that Weller’s kind of got his own story going on. How much are we going to find-out about this guy and about his back story over the course of the season?
SULLIVAN: We’ll find that a lot about what he’s lost and how focused he is on his job and trying to help solve the case of who Jane Doe is.

Can you compare the action that you’re going to do in this to what you do in STRIKE BACK? You got really badly hurt in that show.
SULLIVAN: That had nothing to do with a stunt on the show. This season actually is about trauma. But there was absolutely a lot more action in STRIKE BACK. So I think it’s a very different world to play soldiers as opposed to FBI agents.

After STRIKE BACK, were you inundated with different scripts? Were a lot of things thrown at you and if it were, why did this show appeal to you the most?
SULLIVAN: This is an awesome story. Oviously been created by Martin Gero, who’s a great man, actually the premise for the show is sort of it excited me – to actually see where this will go throughout the season. Also it’s shot in New York, and with the people who created it and the NBC and Warner Brothers family it was an easy ship to jump onboard. Obviously, we find out more about Kurt as we go on. It’s interesting to find out what drives him to become an FBI agent and also what exactly is the connection between these two people, Kurt Weller and Jane Doe. So it’s a great start.

We’ve seen so many FBI characters on TV and often times they’re kind of cookie-cutter but it was surprising at how intelligent your character was and how compassionate he was about Jane Doe. Can you sort of speak to what you like about this character and how he’s different from so many FBI agents we’ve seen on television?
SULLIVAN: I love the fact that there is this connection between Kurt and Jane Doe – and what is this connection between these two — and it not just him trying to solve cases. What I love about this character of Kurt is he is not a cookie-cutter FBI agent and it’s not just each case procedural. We get to explore his past and his connection between himself and Jane Doe and you see the drive that makes this man who he is. He is a very layered man, very focused at work, but yet you do see some of the emotional characteristics in him.

How does Kurt feel about Jane at this point? He’s been very good to her, but obviously he must be a little suspicious with some of the interesting things that have come out of her mouth and how she uses her fists.
SULLIVAN: I think at first we are quite suspicious as to why the FBI was directly linked to this case, this target, and as to what the connection is and why his name was tattooed on her back. Then through the investigation and the tests they’ve put her through, he realizes that she’s telling the truth. So I think we do see that sort of almost caring nature of him and the fact that he does sympathize or empathize with the fact that she’s lost. He obviously understands that it would be quite hard to lose your identity and who you are or where you’re from.

Weller attempts to train Jane until he realizes how skill she is. Do we see him getting more suspicious of her as he kinds of starts to realize that she’s got all these skills?
SULLIVAN: I don’t know about suspicion. I think that just opens-up the door to really trying to find-out who she is or how she understands the different aspects of the world that they are in and why she understands weapons and fighting. I think that just sort of becomes more intriguing for them as they’re finding stuff out.

Do you like about the role you’re playing in the series as compared to other roles?
SULLIVAN: Kurt is a pretty honest and straight-up guy. He’s obviously very focused at his job and for good reasons. Something happened in his past and that drives him to sort of try to make the world a better place by chasing criminals and solving cases, which in turn saves people’s lives. So I like the fact that he’s got a big heart and that’s how he lives his life. He’s got things to do and he seems to come from a very positive place.

What it’s like working with Jaimie Alexander? It seems like from the first episode at least that you and Jaimie have some really good chemistry that’s plays well into the show between Agent Weller and Jane Doe.
SULLIVAN: She’s awesome. She’s an awesome girl to work with and she’s good at her job. So working with that every day and working with that aspect of it just makes work easier. Jaimie and the rest of the cast, we all just get along really well and we sort of do our best to try and make the show the best the best that we possibly can.

STRIKE BACK was filmed all over the world and BLINDSPOT is filmed mostly in New York. Do you feel more sort of settled filming in one city? And what is New York like as a location as an actor?
SULLIVAN: Good question. I love it. I guess you’re right. It’s been nice to settle-in to a city for obviously longer that more than a few months, where in STRIKE BACK we were in and out of places after a couple of months. So it’s nice here in New York. New York’s a fantastic city. It is a great place to work and it’s a great character to have in the show to be able to see the city and then chase criminals through this town. It’s exciting.

Did you meet with any FBI agents or maybe even go to Quantico to learn more about your character?
SULLIVAN: Yes, I did. I met-up with a couple of agents and we just talked about how they approach work. It was an honor to meet the men that do this for real. To hear some of the stories they told me it was really eye-opening and exciting.

We are curious about Weller’s relationship with the rest of the FBI team as the season goes on and how that relationship is going to develop along with his relationship with Jane.
SULLIVAN: As actors, we are great friends — the whole group of us and we all enjoy making the show. But for the characters, we’re sort of developing this team that has been together for years and they are quite close and understand each other. But I’m sure we will see these relationships develop throughout the course of the season and delve into people’s back stories different connections of each of the characters.

Talking about what you admired about the character of Kurt and how every actor brings a little of himself to the characters, in what ways would you say you’re similar to Kurt, if at all?
SULLIVAN: I would say I’m similar., I think we’re both very focused on our work and I guess even though Kurt rights the wrongs in the world, I guess I’d do the same if something’s not right and I’ll fight against it. So it’s similar in that sense. Then also the camaraderie between obviously Kurt and the other agents, that stuff again is very similar to myself, working with a great crew that we’re working with and my fellow actors that I’m working with. I enjoy working as a team to do the best we possibly can.

If you had a chance to go hang-out on a night with the team, would you rather hang-out with Kurt or with Damian, or both?
SULLIVAN: Probably both because at least then you’re not going to get in trouble and probably more with Damian because then you’ll get into some trouble.

What was it like for you to play the guy that for once is getting knocked around a bit instead of doing the knocking around — and how much punishment is Weller going to take this season?
SULLIVAN: I don’t know. I mean it’s been fun to do – to explore action in a different way. So it is a bit different. But that’s fine. I don’t mind getting knocked around. But we always seem to end-up on the right side at the end of the fight.

How much of the season also is going to be spent on trying to figure-out the mystery of why your character’s name is tattooed on Jane Doe’s body? And how long do you think the show can sustain itself on the mystery of the tattoos?
SULLIVAN: Obviously, that is one of the most important arcs as to why we connected and why has Kurt Weller specifically been drawn into this case. But then we can puts lots of tattoos on Jane Doe. I’m hoping that we can hopefully make the show go for a long, long time.

To find out just where those tattoos lead and where all the connections lead, be sure to tune in for all new episodes of BLINDSPOT on Monday nights at 10:00 p.m. on NBC.