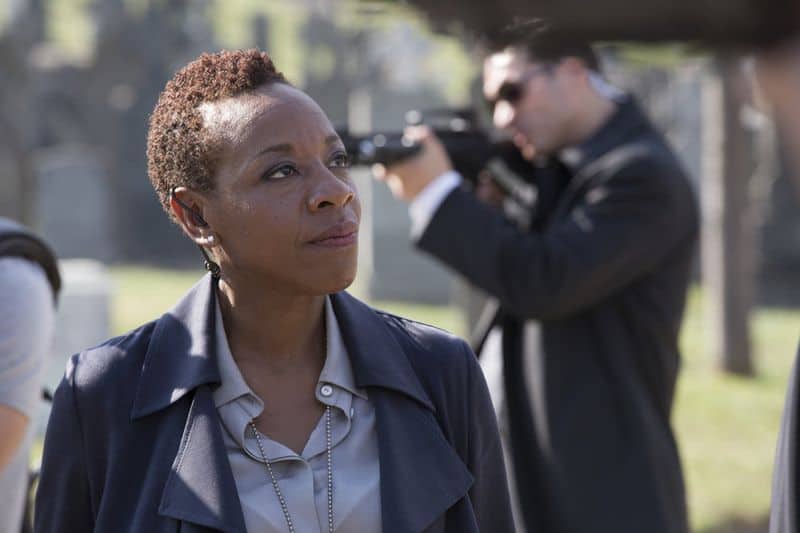 Currently starring as Bethany Mayfair, Assistant Director of the FBI, in the red-hot NBC drama series BLINDSPOT, Marianne Jean-Baptiste is walking a tightrope amongst the questions of who is Jane Doe (Jaimie Alexander) and why was she sent to the FBI.  With the question of Jane’s true identity perhaps being solved as the abducted childhood friend of Kurt Weller (Sullivan Stapleton), there still remains the question of why Jane was sent to FBI covered in mysterious tattoos – each a ticking time-bomb as each unveils a threat more deadly than that last.   Someone clearly knows about the government’s dirty little black-book secrets and the tattoos are the bread-crumbs to tracking down homegrown terrorists and eminent threats – and one of those dirty little secrets leads right back to Assistant Director Mayfair (Marianne Jean-Baptiste).

In a recent press interview, Marianne Jean-Baptiste talked about what drew her to the complex and perhaps duplicitous role of Bethany Mayfair and just how far BLINDSPOT can spool out the incredible mysteries embedded in each tattoo on Jane’s body.

What was it about the show’s premise and about your character that turned you on and made you want to be part of this?
MARIANNE: I found it a very quick and exciting read. I love puzzles, conundrums, mysteries. So this sort of thing was right up my street. The element of tattoos and Jane being a sort of treasure map made me very excited about trying to sort of solve those pieces. In further conversations with the creator, who obviously went into a bit more about Bethany Mayfair, I felt that this would be a great opportunity to explore something slightly different. Although I have played an FBI agent before, this woman is the Assistant Director and is not at first what she seems to be. There was a bit of intrigue, there was some secret that as the show goes on would be revealed.  So all those elements excited me quite a bit.

Why do you suppose BLINDSPOT is resonating with viewers?
MARIANNE: I think they very cleverly have been able to weave-in great action and have the overall mystery of the whole thing. So those people who love to solve a mystery or a puzzle, that’s for them with the action, but it also just sort of weaves in some great character stuff where characters are slowly being revealed and I just think it’s a really sort of magical combination that hooks a lot of people.

It was pretty surprising that the show has already revealed that Jane is Taylor Shaw. Were you surprised that the show seems to be revealing secrets rather than keeping them for later on?
MARIANNE: Well, you’ve got an entire body covered from head to toe with these tattoos.  So it’s like there’s no end to stuff that’s going to be revealed. I think it’s great because it is like there’s been quite a quick payoff to some of the mysteries that are being revealed. At first I was like, “Oh come on, let’s string it out a little bit more.”  But I think that we’ve got a great team of writers and that are extremely clever and I just think that they know what they’re doing.

Does that mean that we will be learning more about what Operation Daylight is sooner rather than later?
MARIANNE:  Most definitely.

You mentioned that the producers talked to you about the back story a little of the characters. Did they give you a lot of character history? Like did they tell you what Operation Daylight is are you still in the dark?
MARIANNE:  No, they told us quite a bit. They know where this story is going. I mean, they’ve worked-out the entire thing.  On a personal level, I love getting the script and going, “Oh my God!” and being surprised because I don’t always get to see the episodes when they air.  So it’s lovely to sort of like read them and discover what’s next. Obviously, we appreciate them giving us a heads-up.

How close are you to your character in real life because you pull it off amazingly?
MARIANNE: I take my job very seriously and I want to do well.  So that type of thing where they’re pushing the narrative, I try and use every opportunity to explore someone who is very unlike me.  That’s always sort of been my goal.  So she’s very well put together — all business and official and in charge and bossy and it is great just sort of step into her six-inch heels every day and do that.

Since you are playing the Assistant Director of the FBI, what did you do to prepare for the role?
MARIANNE: I kind of did a bit of a refresher because I’ve done it for a show that I did years ago.  But, obviously, she’s in a higher position.  So just sort of like reacquainting myself with protocols and all that stuff.  But then you look at the character as a whole and you have to decide how much attention they pay to that, like: do they slightly bend the rules? I mean, in this particular story that we’re telling, Weller is sort of a bit of a loose-cannon at times and she sort of — although against her better judgment — knows that he’s got a really good gut-feeling and lets him do things that she may not necessarily believe is the way to do them. So that’s been what I’ve really been exploring with it and wanting to keep it as authentic as possible, but still with that sort of creative license.

It is unbelievable how cohesive it was just right from the start between the actors, the characters, the setting, the writing. What do you think has made that possible?
MARIANNE: I think Martin Gero is a very clever guy. It’s the perfect combination. He’s clever and he’s selected a great group of writers and a great cast.  We all get on really well. We go out and eat and all that, so when we’re on set it’s sort of like there’s already a little shorthand developing in how we work and interact with each other. Plus, the scripts are very strong. I mean, I’m reading them as soon as they land — whether I’m in the middle of an episode or not — because I just want to know what’s going to happen next and I know that my other cast members feel the same way – and if we’re excited about getting hold of them, you can only imagine what it’s like for the audiences discovering these puzzles every week!

Where do you want your character to be by the end of the show?
MARIANNE: Oh, probably an island in the Caribbean somewhere.  [Laughs] I don’t know. It’s very exciting just not knowing.  You kind of have a rough overview of things that are going to take place but it’s a roller coaster ride. It’s sort of, “Okay, she’s doing this,” which I totally embrace. And I trust that it’s going to be very exciting.

You’re currently in two shows, BLINDSPOT and BROADCHURCH, one is crime drama mystery and the other is a drama mystery thriller.  Is there any difference in the way you approach a role for an American audience versus a British audience?
MARIANNE: No, you can’t think like that. It’s got be about the character. It really has to and it has to be about the integrity of the piece that you’re doing. I mean, obviously in the U.K. they take much longer with things. It’s not like an eight-day or nine-day turnaround.  It’s like you get for 2 and 1/2 weeks on an episode.  But then they will only do eight so there isn’t that need to keep driving it through.  But it’s great.  It’s great sort of being able to work in that way and just be focused on it and you don’t look at the big picture.  You just hope people will like it and respond to it.  But you’ve got to compartmentalize and really focus on telling the story to be the best of your ability and then hopefully the people go, “I love your show.”

Are you ever like astounded by how intricate and difficult the tattoos and the puzzles that are related to the clues that are all over Jane’s body as part of the story?
MARIANNE: Constantly! I mean, I’m constantly blown away by how they’re deciphered and think about who is it that created that puzzle in the first place. I mean, it’s very, very exciting for us, watching how it all unfolds.  The cast is going, “Oh my God!”  There are little tiny ones, like the first one in the pilot that was behind her ear, the Chinese writing behind her ear. I mean, that’s like that was amazing and, if you can imagine, she’s got little bits on her elbow. There might be a number there and it’s all going to lead to somewhere. It’s all been sort of really well thought-out and planned ahead and it’s great.

It seem like Mayfair feels protective of Jane despite the fact that Jane poses a clear threat to her.
MARIANNE: Aha. Does she?  Yes, I mean, it’s interesting because I think that the whole show is based on things that seem extreme, very apparent, then sort of being turned on their head and you don’t ever quite know for sure what is going on — without sort of telling you anything in the story.

In last week’s episode, we found out at the very end that Jane’s DNA and the isotope did not match but were both conclusive. Are you able to tell us anything about how your character might react to that news?
MARIANNE: I think that Mayfair is very level-headed and will assess all the evidence that is placed before her before making any kind of decision or assertion.

Are you finding out about these secrets and these twists as you go along or are any of them ones that you’ve been told from the beginning and are aware are coming?
MARIANNE:  For the most part, it’s a complete and utter surprise.  But, obviously, ones that affect the character and their overall arc, you sort of have to know up-front.

Considering all of the twists and turns and all of the tattoos from head to toe, how long do you think that this premise can be drawn-out series-wise?
MARIANNE: Oh my God. I mean, I don’t know. I mean, you could draw it out for a good like five-six-seven seasons I think, but I don’t know. I just know that there is a wealth of material to clip through and, I mean:  Are we going to stay with the tattoos? Is it going to evolve in a different area? I don’t know.

Do you think that there is going to potentially come a point where Jane’s mystery is figured ou and the tattoos’ messages run out, but the show is still going?
MARIANNE: It could do that because it could lead to something else.  Something else could show-up that they have to decipher that’s attached to the tattoos and attached to her.  I’m stunned each week by the stuff that they’re having to find and I’m only on Episode 10.  So it’s like, “Wow” and it gets bigger and it leads back to this and this.  It’s actually genius. It’s really clever and really intricate.

To find out just how quickly the lid is blown off of Operation Daylight and where those tattoos lead next, be sure to tune in for an all new episode of BLINDSPOT on Monday, October 19th at 10:00 p.m. for the episode entitled “Split the Law.”  Will Mayfair be able to keep secret her part in perhaps a conspiracy gone wrong?