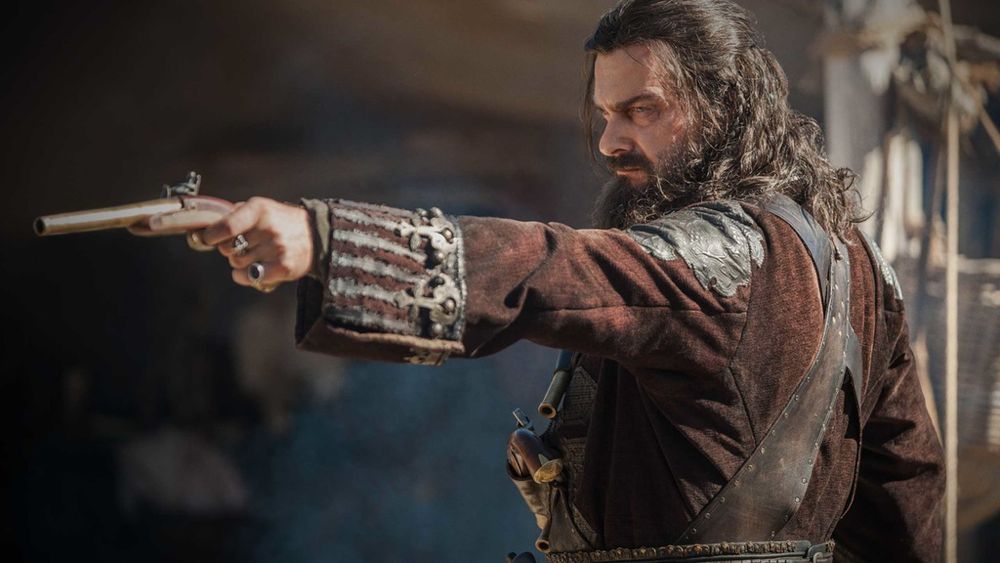 Just who do pirates fear? No one but themselves.  But in the case of Blackbeard, they perhaps should fear him most of all.  In Season 3 of BLACK SAILS, Blackbeard comes with a very specific purpose in mind:  to remind everyone why they absolutely should fear and tremble before pirates.

In an exclusive interview, star Ray Stevenson, who portrays the ferocious Blackbeard in Season 3, talks about what Blackbeard truly wants and just how he is going to wreak havoc on Nassau.

What initially attracted you to the role of Blackbeard on BLACK SAILS?
RAY:  I got sent the script and I had seen the show, which I thought was great.  But what really attracted me was that I got to see “the making of” and that documentary about the making of BLACK SAILS blew me away.  You saw the through-the-roof production values — everything from the fabricated construction to the costumes to the hair and make-up to the cast and crew — I thought, “You know what? These people are putting their money where their mouth is — they are putting their money on the screen.”  It just drew me in and I thought, “If I have a chance, I want to be a part of this.”  And I was right.  I had great fun doing it.

And to play one of the most notoriously wicked men of all history!
RAY:  Well, you know, wicked is wicked.  He doesn’t get out of bed and think, “I’m going to be wicked today.”  He’s a much more complex man.  Also, this really reveals a side of the man that I don’t think has been revealed before.  He spent 8 years away from Nassau.  He had 8 wives.  He had nothing but girls.  He was searching for an heir — an heir-apparent.  He had this kind of Henry the VIII syndrome and couldn’t find a son to carry on his legacy and keep his legend alive.  And that it is of paramount importance to a man in this period of time — that they just didn’t disappear from the history books — that they had earned their place. So his search is for an heir-apparent and he returns to Nassau to try rekindle a relationship with someone he was mentoring or to see if there is anything to be rekindled, in the hope that he would have somebody to pass on his legend to and keep his legacy alive.

Undoubtedly, Blackbeard is going to cross paths with Flint (Toby Stephenson) and Vane (Zach McGowan) pretty quickly, and Flint and Vane seem to have teamed up.  Is Blackbeard ready to face them together or is he going to look for alliances at this point?
RAY:  He’s going to put his own crew together.  But when he arrives, he is obviously a bit disappointed by what he sees and he accuses Rackham (Toby Schmitz) and Vane of:  “You’ve given Nassau the one thing that it should never have — and that is prosperity.”  He sees them just getting soft and there are no pirates left, and he really holds them to task.  He is the real deal.  They cannot hide behind their building of a new society and he leads by example.  So he definitely upsets the apple cart. It’s tumultuous times.

Since Blackbeard wants to clean-house a bit, is he going to run across Eleanor Guthrie (Hannah New) at some point or is she not on his radar?
RAY:  He has no love lost for the Guthries.  Historically, they are not on his Christmas card list.  Let’s put it that way.  What I love about this series is that there is a “storm” coming and the “storm” arrives and the women, like Max (Jessica Parker Kennedy) and Anne (Clara Paget) and Eleanor, their storylines just go insane and they become so rich and so convoluted.  It’s a tremendous season.  It’s going to be very exciting.

Did you find yourself having to train a lot with the various weaponry?
RAY:  I’ve done a lot of that before, but to be safe, we did a lot of work with the stunt guys. There’s just a different sort of technique.  Any fight training is essentially a highly choreographed dance.  It has to be for safety.  We’re fighting in boots and we’re fighting in sand and there is a lot of sword work and you’re on a deck of a ship that is rolling about.  Like anything, you take it and you run with it and you work harder than any work you’ve done in any gym.  You come away at the end of the day and your legs are like jelly.  But you have achieved something.  So it was great fun.  It’s a good group of people.  All the stunt guys are so well experienced having already done two seasons.  So they were constantly inventing new ways to kill people.  [Laughs]

What is Blackbeard’s weapon of choice?
RAY:  He has swords and pistols.  He was renown for wearing 4 pistols across his chest and having more pistols about him, as well as a sword and a dagger.   He would have a pistol in one hand and a sword in the other.  So he shoot the pistol and drop it and then draw out another pistol and shoot again and then stab someone and draw again with the pistol cocked and loaded already.  He was a war-machine.

What was it like working with the Tobys and Zach and everyone else?
RAY:  It was great. They could not have been more welcoming.  They have worked so hard to establish this ensemble, and getting a character like Blackbeard who is essentially larger than life anyway, they just welcomed me with open arms.  It was thrilling to be part of it.

Was there any love-lost between Flint and Blackbeard?
RAY:  They do get to know each other.

That sounds ominous.
RAY:  [Laughs] Make of it what you will. They do get to know each other.

What is the number one goal for Blackbeard?  Is it all about his legacy or is he anxious to start making money at this point?  What is his first intent?
RAY:  To pick back up the reins with Blackbeard and get a crew and a ship.  He gets a ship, but the crew doesn’t want to be a part of his crew.  He has ideas of his own to take on the various fleets and start bringing in the booty.  But also, underneath it all, is this father-son psychology that he has got going on about who does he leave his legacy to and keeping his legend alive.

What is the one thing you admired about him?
RAY:  I didn’t know how mischievous or playful he was.  He knew all about theatricality.  It was his choice to dress himself up in the highest sort of waist-coat and also to put all the weaponry on him. He knew the impact theatrically-wise of getting aboard a ship or approaching a vessel that he was about to attack and they look across and they see this colossal figure with all his pistols and they would just capitulate, so that he didn’t have to fight.  So all his crew survived, he got all the booty and he sailed off again.  And his legend lives on.  He knew the power of intimidation.  I thought that was great.  It wasn’t just about being “I’m the biggest badass and I’m going to kill more people.”  Far from it.  He preferred not to.

What was your favorite scene to do as Blackbeard?
RAY:  Wow, there were so many.  I do have a big sword fight, which I was delighted to do. I loved the entrance that he has in the first episode.  It really sets him up beautifully.  There is a scene where for the first time ever, I had my torso tattooed up.  That was very interesting.  There were so many things. Also, being on the ship.  It’s this huge galleon and the whole ship is moving and water is spraying across the decks and the sails are full with wind, and you are just careening on this galleon amidst the fighting.  I just loved every bit of it.

To see Blackbeard’s unexpected arrival and the repercussions that he leaves in his wake, be sure to tune in for the Season 3 premiere of BLACK SAILS on Saturday, January 23rd on Starz.