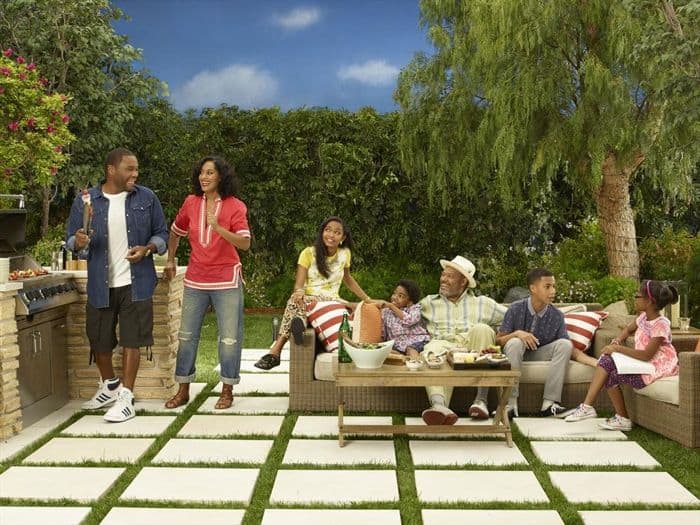 BLACK-ISH, as the title suggests, does not shy away from racial issues. In fact, it goes right to them in the pilot, and sets them up as themes for the show as a whole. Other series have touched on what BLACK-ISH does, but I can’t recall ever seeing the debate about what makes a modern African American family true to themselves and their culture as directly as this one does on one of the Big Four networks, at least not recently. And it’s decently, though not overly, funny.

I really like Anthony Anderson (Law & Order), who plays Andre, the main character. His humor comes from his suffering, and BLACK-ISH has plenty of that. Successful at his advertising agency, Andre is excited about being promoted until he finds out that he’s heading the new Urban department and feels like he’s being used for his skin tone. At the same time, he also deals with his kids acting “too white” with their upper-middle class peers, and tries to help them remember who they are. Basically, he’s beset on all sides, fighting multiple battles by himself.

It’s pretty cool that the rest of Andre’s family doesn’t worry nearly as much about race as he does. His wife, Rainbow (Tracee Ellis Ross, daughter of Diana, Girlfriends), is a successful surgeon, and she’d rather concentrate on her job than perceived slights or stereotyping. His kids (The First Family’s Yara Shahidi and lesser knowns Marcus Scribner, Miles Brown, and Marsai Martin) are hilariously cute in their ignorance about the simplest things pertaining to their skin color, such as that Obama is the first black president. For children raised in this type of community at this time, race just doesn’t seem an everyday factor for them. Even Andre’s dad, Pops (Laurence Fishburne, Hannibal), who marched in the Civil Rights Movement, or so he says, though I’m not sure I believe him, doesn’t care as much as Andre does about their place in the world.

Being a white man myself, I may not understand all of the complex emotions and motivations that are part of being a black person in America these days. But I do know humor, and Anderson usually has it. The topics covered here may be touchy in certain company, but by putting something like this on TV every week as a sitcom, it will surely contribute to the breaking down of barriers. It doesn’t trivialize anything, but it gets the conversation going through an accessible medium, something important in the less-diverse-than-it-should-be network television landscape.

Unfortunately, it’s not as funny as it could and should be. As I’ve said, Anderson is good, but the material is weak-ish (hehe). BLACK-ISH has some great moments, to be sure, but there are also some weird ones. Anderson sometimes stretches just too far for a laugh, and it leaves the realm of believability. Luckily, there is heart and familial relationships to help push the show along when it lags between laughs. It could be better than it is with the ingredients it already has, and hopefully it will be.

I think the element of BLACK-ISH I like least is Rainbow. As a wife, she’s a stock character, the career woman aspect no longer being exceptional enough to rate attention, and lacking anything else to define her, at least in the first episode. Several times during the viewing, I found myself wishing Anderson’s Guys with Kids TV wife, Tempestt Bledsoe from The Cosby Show, had been cast instead. Not only did Bledsoe do something more interesting with a very similar character, but she had oodles more chemistry with Anderson. Sadly, it’s probably too late to correct that.

BLACK-ISH isn’t bad, and because it serves an important purpose, being the only current network sitcom with an all-black family, I hope it does well. The show’s take on current perceptions is sharp at times throughout. If the script could be cleaned up a bit, and often shows do improve past the pilot, it could definitely be a good addition to any DVR lineup.