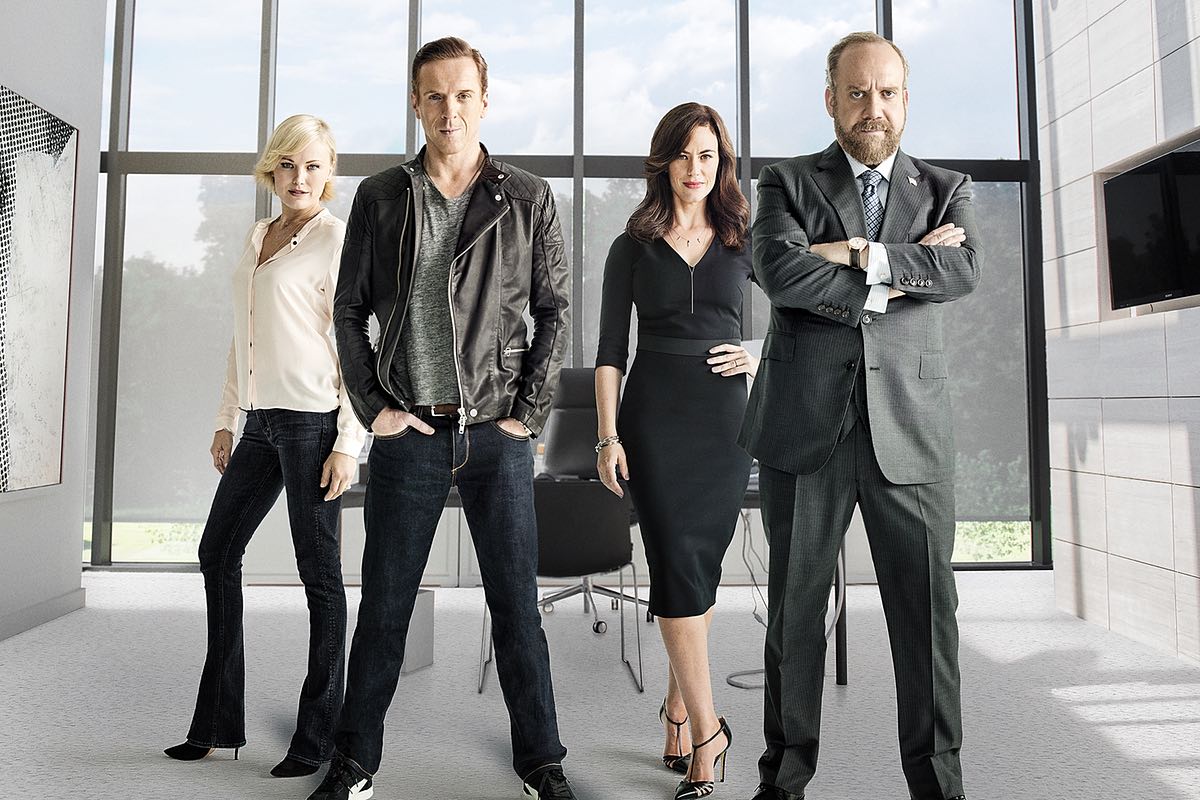 Showtime’s new series BILLIONS is seemingly about a hedge fund manager and a U.S. Attorney, a battle of the big guy versus the common man, and a way to express class frustration in this country. But what it really is, is a drama about two flawed, petty men going at one another for all they’re worth, a battle to the death (perhaps not literally, but definitely of life as they know it), that only one man can walk away from, at best. And honestly, that’s plenty for me.

WARNING: Spoilers are below, but nothing more spoiler-y than Wikipedia reveals.

BILLIONS stars Paul Giamatti (Sideways, John Adams) as the United States Attorney for the Southern District of New York, Chuck Rhoades. Chuck has a flawless record locking up those who deserve it, picking his cases carefully, and with a chip on his shoulder against the rich who think they’re above the rules. He is influenced by his successful father, and intimidated (sometimes positively) by his wife, Wendy (Maggie Siff, Sons of Anarchy, Mad Men), who makes far more money than he does.

Wendy makes so much because she works for Bobby Axelrod (Damian Lewis, Homeland, Wolf Hall), an extremely successful player in the financial game. Wendy is his motivational coach, though one wonders how much she knows about Bobby’s dalliances on the wrong side of the law. Bobby’s own wife, Lara (Malin Akerman, Watchmen, Trophy Wife), is certainly aware and supportive, even when it includes milking 9/11 for the family’s monetary gain. This couple sometimes pushes things a little too far.

Admittedly, that premise is a bit far-fetched. The coincidence of Wendy’s employment alone, though existing long before Chuck rose to power, stretches believability. Yet, the characters are perfectly positioned for maximum conflict and drama, so I don’t find myself minding all that much.

The primary reason to watch BILLIONS is Giamatti and Lewis. Both accomplished, excellent performers, watching them take these complex men and engage in a person struggle is highly engrossing. Both have noble qualities and glaring flaws, and both do things from a calculating perspective. They are two titans at the top of their game (a description of both the characters and the actors), and it’s a privilege to see them compete with abandon.

That isn’t to say the story isn’t enjoyable. Any series on Showtime these days is pretty darn good, with the network having a high level of quality in their programming. There are layers and twists and plenty of detail to keep things interesting, and the topic is relevant and current. I’m just saying that is secondary to the main attraction, the fight where viewers will be unsure of who to side with from one scene to the next.

What I’d most like to see change as time goes on is for Wendy and Lara to play an equal role in the proceedings. Wendy certainly does more than Lara in the pilot, but is still supporting to the men. The lead actresses are perfectly capable of standing toe-to-toe with their on-screen husbands, so I hope BILLIONS is gender-equal over time.

There is also a top tier supporting cast, including David Costabile (Breaking Bad, Suits) and Toby Leonard Moore (Daredevil, The Pacific), who play the assistants to our antiheroes. The production itself is pretty, and the direction is appropriate to the scale of the conflict.

In short, BILLIONS is exactly on par with what I expect from Showtime, if not a notch or two above some of its peers. I am definitely committed to watching it, and recommend you check it out. Like I said, if nothing else, you’ll likely enjoy the leads.