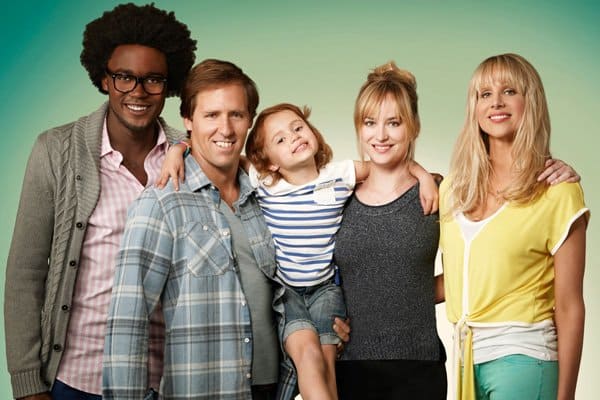 FOX’s new sitcom, BEN AND KATE, is a lightning rod for mixed feelings. One wants to admire their quirky humor, but sometimes it also seems too low-brow. The characters are sympathetic, but they take things a bit too far. The titular leads, Ben (Nat Faxon, Allen Gregory, Reno 911!) and Kate (Dakota Johnson, 21 Jump Street), have good chemistry, but it can verge into creepy territory when it skims past sibling and into slight romance. The supporting cast is fantastic, but are they well used?

The beginning of the “Pilot,” which premieres Tuesday, September 25th, and is available now on Hulu, is not an auspicious start. Kate is getting by as a single mom, and then her screw up brother, Ben, comes to town. She loves him and is happy to see him, but knows he will invariably mess up her life, which he does.

But rather than stick to that familiar premise, BEN AND KATE soon reveals that Kate is just as messed up as her brother, in other ways. And while Ben does tend to make some bad situations worse, he also comes through for Kate, such as when he stops her from sleeping with a guy who isn’t serious about her. So, suddenly the dynamic is more balanced, which does make for a better story. When Ben tells Kate she only made one mistake, and it was the best thing that ever happened to her, referring to Kate’s daughter, it’s a touching, perfect moment.

The thing is, Faxon and Johnson just haven’t pinned down their chemistry yet. They do have it, but it’s almost like they should be romantic leads, rather than playing brother and sister. Their under-the-table meetings are sweet, but you’re waiting for them to lean forward and kiss, which would be disgusting, given the established sibling bond. Raised in the household that they were, it’s understandable that they are a bit messed up. As long as the show doesn’t go too far with them, it works.

The best part of BEN AND KATE is Kate’s five year old daughter, Maddie. Or rather, Maggie Elizabeth Jones (We Bought a Zoo), the very talented young actress who plays the role. She is funny, can sell a punch line, rolls with the craziness, and is freaking adorable. Even if the leads sucked, it would almost be worth watching just for her. Luckily, the scenes in which she appears tend to bring out the best in both Johnson and Faxon, and she provides the easiest path to turn viewers into fans.

Rounding out the cast are Lucy Punch (Dinner for Schmucks, The Class) as BJ and Echo Kellum as Tommy, Kate’s friends, who also happen to be fond of Ben. Like the leads, I am torn on these two, and it may just be because the series isn’t sure how to use them yet. Sometimes they are the butt of crass, unnecessary jokes (see: BJ’s name), and other times, they do exactly what a supportive friend is supposed to do. They buy a little too much into Kate and Ben’s weirdness, but then, anyone who would be their friend would have to. Punch has proven herself as extremely talented in other projects, and Kellum does fine, too, so there is definitely something there, if only it could be tapped.

That’s the entire problem with BEN AND KATE. There’s a wonderful series hiding just below the surface, but there’s also a terrible one. Both keep popping up throughout the first episode. Many terrific shows have horrendous pilots, so hopefully the good will vanquish the bad, in time. But it could easily go the other way, as well, so this is one to cautiously watch.