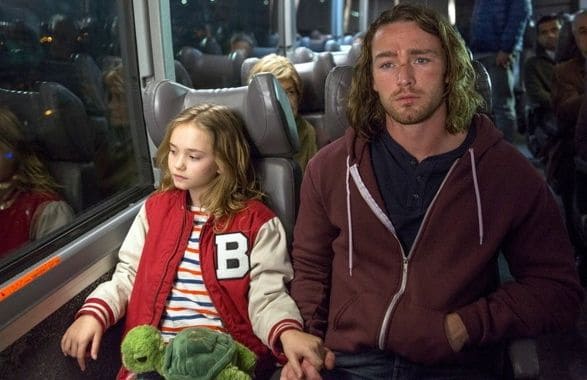 NBC’s new drama BELIEVE, previewing this week, is the story of a man named Tate (Jack McLaughlin, Crash), who looks a bit like the white, European version of Jesus, assigned to protect a young girl named Bo (Johnny Sequoyah, Unicorns), who acts like Jesus. It’s like the short-lived FOX show Touch, but with more action and less scientific grounding.

The whole thing starts with a horrific car crash in which Bo loses her parents, murdered post-wreck by an evil assassin named Moore (Sienna Guillory, Luther). Before you worry too much that this will scar Bo for life, we soon learn these are foster parents who have only had Bo for two weeks, and are the latest in a string of guardians that haven’t lasted for the girl. Now, she needs a new protector.

Enter Tate, an inmate sitting on death row. But Winter (Delroy Lindo, The Chicago Code) is coming, and soon Tate is busted out of the pokey. The audience is told he’s innocent, and Winter has complete faith that Tate is the one to look after Bo, despite Tate’s grumblings to the contrary. Soon, BELIEVE has put together a buddy cop duo who are separated by gender and age.

Lest you wonder why Winter chose Tate, it’s a question answered by the end of the pilot, and it does make sense. This is good, because much of the other things that happen do not. Why, for instance, is Tate able to sneak into a hospital undetected, leaping off a gurney in front of many people, and still able to make his way, unmolested, through the halls? And why is Moore able to enter that same building at the same time, also able to move more freely than is believable? Does everyone in this hospital have blinders on?

Of course, this being an hour-long drama on NBC, a character study is not enough, so the writers, led by series co-creator Alfonso Cuaron (Gravity) and producer J.J. Abrams (Star Trek, Person of Interest), among others, build a whole mythology around the players. Bo has supernatural powers, which are barely glimpsed in the pilot. Winter leads a group to protect her, including the jealous Channing (Jamie Chung, Once Upon a Time), who wants to know why she can’t be Bo’s guardian. The villains are headed up by Winter’s former partner, Skouras (Kyle MacLachlan, Portlandia, Desperate Housewives), although why Winter and Skouras had a falling out and ended up on opposite sides of the battle is unknown.

It is fine to have a plot structure such as the one above if it is layered and complex. BELIEVE is not. We know immediately who to trust and who Bo should run from, and there’s little original about the relationships or the set up. It’s an interesting concept taken in too-familiar directions, leeching out any originality to make a bland product.

To make matters even worse, it’s clear BELIEVE will have a procedural component, with Bo taking a quick break from the adventures in the “Pilot” to help a doctor (Rami Malek, The Pacific) find his confidence and purpose. Isn’t it enough to have a great story without forcing in a formula that will repeat from week to week?

It’s these hallmarks of a broadcast network series that drag BELIEVE down. I fully believe the concept could succeed on a cable network that rewards freshness. Instead, it is on one of the Big Four, so the ideas have to be smashed into existing molds. It’s frustrating to watch many shows per year ruined because of such constraints, and BELIEVE seems destined to be yet another victim of the system. Given the minds behind the project, it didn’t have to be this way.