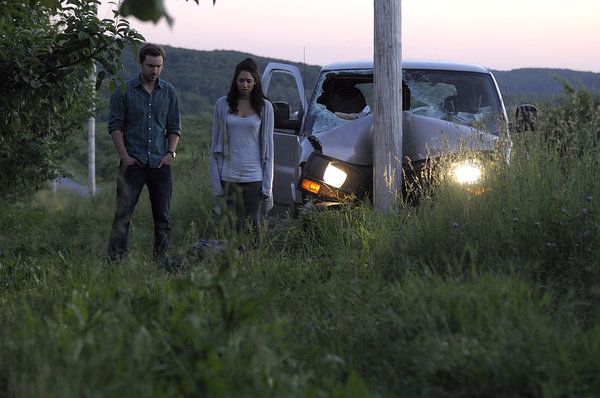 SyFy’s American remake of BEING HUMAN is back for a third round this week with “It’s a Shame About Ray,” airing Monday at 9 p.m. ET. It’s been fifteen months since we last saw the roommates, and fifteen months since they last saw each other. Josh (Sam Huntington) and Nora (Kristen Hager) search in vain for Sally (Meaghan Rath), still trapped in limbo, and Aidan (Sam Witwer), still buried in the ground.

Fifteen months. I can’t believe that the series make such a time jump, but it really works. The past year plus hasn’t been all that interesting for the characters, with little happening, so it makes sense to skip over it. It also allows a reset, of sorts, and puts everyone in different places from where we left them. It really starts the year off interestingly.

What a way to live, though! Josh’s frustration as they visit with psychic after psychic is understandable. For over a year, he and Nora have been looking for a way to bring their friends home, and to no avail. It’s amazing that Nora still has the patience she has, and that Josh is still participating. Most people would give up after a year. Which just goes to show how strong a bond the main characters of BEING HUMAN have.

Of, course, Josh has other issues, too. He definitely feels guilty about killing Ray (Andreas Apergis), and that doing so only cured him of the werewolf curse, not Nora. Apparently, murdering one’s maker does not extend the fix to the next limb of the family tree. For Nora to be a human again, Josh must die, and Josh has to live with the knowledge of what he has done to her, and that he can’t do anything about it, other than killing himself, which would also hurt her deeply.The U.S. version of BEING HUMAN has differed pretty drastically from its UK counterpart by this point, and Josh being human again is just one of the many ways. One wonders if Nora satisfies the werewolf contingent for the series, or if Josh will have to be turned back, possibly by Nora in some sort of poetic justice. Josh as a human or as a werewolf both present intriguing possibilities, so hopefully the human thing will be explored, at least for a little bit.

Nora and Josh do catch a break when they find a witch named Donna Gilchrist (Amy Aquino, The Finder, Harry’s Law). Donna can bring Sally back, but she needs $2000, the heart of someone Josh or Nora have murdered, and Sally’s body. And the spell will return Sally as a human.

It’s a dark spell, to be sure, but I like how it all ties into Ray’s body, and Josh and Nora’s story. I do think that Donna has some dark plans having to do with Ray, as glimpsed at the end of the hour, and I don’t know what her motivations are to help, because I doubt it’s just for the money. There’s a mysterious and enticing character here, and I hope Aquino sticks around for awhile.

So Sally is brought back to life in “It’s a Shame About Ray,” as a human. Before you say “like Josh,” though, there are complications with Sally’s resurrection. Namely, she stuck close to Nick (Pat Kiely) and Stevie (Robert Naylor) while in limbo, and brings both of them through the door into her body with her, not realizing the consequences.

From the way that Sally lies gasping on the bed, one has to wonder, is she suffocating because three souls don’t fit in one body? Or is that just a symptom of her recovery from the traumatic ordeal of being resurrected? Will the three take turns sharing control of Sally’s body? If so, will the writers make the obvious sex-related jokes out of the situation? Or might the boys have woken up in their own bodies, buried under ground and decomposing, not having the suave made from Ray’s heart to restore their physical forms, like Sally did? What will happen next? So many questions, AND we get a Stevie Nicks joke out of it! Well done!

The third member of the trio, Aidan, is the most alone, as usual. And yet, he’s not. He hallucinates Sally and Josh with him every step of the way, below and above the dirt, proving his feelings for them are just as strong as how they feel about him, something that one might have doubted earlier in the series.Aidan has been through a terrible experience, being buried alive and left there, then dug up by a crazy member of the Amish cult, who subsequently dies after trying to kill Aidan. He needs Josh and Sally, and yes, Bishop (Mark Pellegrino), too, to help him will the motivation to survive, being close to a final death repeatedly. Aidan isn’t as much a loner as he would have his friends believe, and with their moral support, imagined or real, he should eventually be able to get home.

As “It’s a Shame About Ray” gives us this very personal story for Aidan, we also get clues as to bigger going-ons in the vampire world. Mother (Deena Aziz) is dead, as is much of her order, due to a very timely human flu. Their civilization is crumbling around them. Will Aidan want to get involved, and if so, how might he see himself in the new power structure?

The only thing I didn’t like in the hour was the flashback where we see Josh not turn into a wolf, and Nora does. It seems unnecessary, and as the only glimpse we get of that time period, extraneous. It is already explained well enough without showing it, and the scenes does almost nothing to add to what is already understood about the characters.

This episode of BEING HUMAN is probably one of my favorites of the series, giving three separate stories for the three main characters, and yet, connecting them in intimate ways. It balances the character-driven plot with the larger action arcs, and does so in a way that feels completely organic. It may have taken three years, but if this episode is any indication, BEING HUMAN is truly finding its stride.