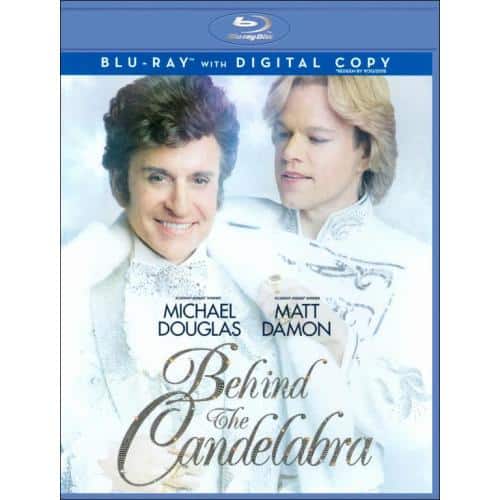 Seat42f and HBO Home Entertainment have teamed up to give TWO lucky winners a copy of BEHIND THE CANDELABRA on BLURAY. For a chance to win leave a comment below telling us why you want to add BEHIND THE CANDELABRA to your BLURAY collection. Only one entry per person. Contest ends September 27th. Winners will be notified on September 29th via email so make sure to use a valid email address when you post your comment.

As glittering and outrageous as Liberace himself, HBO Films® Behind the Candelabra takes a look at the flamboyant entertainer’s private world, focusing on his tempestuous relationship with Scott Thorson, his young live-in lover for five years. Based on Thorson’s tell-all memoir “Behind the Candelabra: My Life with Liberace,” the film is directed by Academy Award® winner Steven Soderbergh (Traffic) and features electrifying performances by Academy Award® winners Michael Douglas (Wall Street) as Liberace and Matt Damon (Good Will Hunting) as Thorson. During its premiere, the film became one of HBO’s most watched original films in nearly 10 years. Behind the Candelabra streets on Blu-ray with Digital Copy ($24.99), DVD ($19.97) and Digital Download on September 17, 2013. The Blu-ray with Digital Copy includes “The Making of Behind the Candelabra” which explores the legacy of Liberace through costumes, sets, locations, and prosthetics with several cast and the crew members including Douglas and Damon.

Before Elvis, before Elton John, Madonna and Lady Gaga, there was Liberace: virtuoso pianist, outrageous entertainer and flamboyant star of stage and television. A name synonymous with showmanship, extravagance and candelabras, he was a world-renowned performer with a flair that endeared him to his audiences and created a loyal fan base spanning his 40-year career. Liberace lived lavishly and embraced a lifestyle of excess both on and off stage. In summer 1977, handsome young stranger Scott Thorson walked into his dressing room and, despite their age difference and seemingly different worlds, the two embarked on a secretive five-year love affair. Behind the Candelabra captures the essence of Liberace’s appeal, while reminding viewers how different attitudes were at the time, as he and his management fiercely protected his public persona.