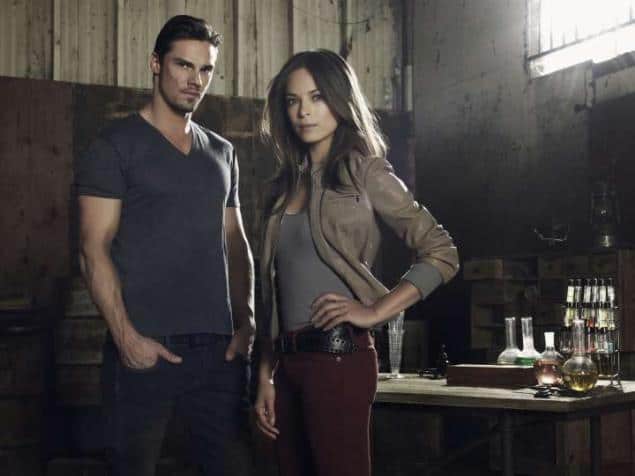 You’ve probably already heard something about the CW’s BEAUTY AND THE BEAST, and it’s likely nothing good. Critics have been brutal about the supposed “reboot” of the old CBS series. Is this pile on deserved? Well, kind of, but not really.

There are definitely some valid criticisms about the “Pilot.” The dialogue is god awful. “You look pretty good for a dead guy” has been done a zillion times, and that’s barely scratching the surface. Every character has at least one groaner, and the writers seem to just want to move the story through the crime procedural elements to get to the mushy “good” stuff, which might partially explain the laziness.

Yes, the CW’s BEAUTY AND THE BEAST may be a crime procedural, or, at least, that’s how the “Pilot” is presented. The titular beauty, Catherine Chandler (Kristin Kreuk, Smallville) is a homicide detective in New York City. She accidentally bumps into Vincent Keller (Jay Ryan, Neighbours), who is a vigilante, and together, they figure out who murdered the body of the week.

Because this is the CW, though, it’s hard to believe that BEAUTY AND THE BEAST will maintain this conceit. The network hasn’t ever really done a procedural, and its attempts at such a thing are usually half-hearted, and soon melt into larger arcs. This is a good thing, as serials are far superior forms of storytelling, and remain much more interesting over time. But it’s curious that this show chooses to start from such a boring launching pad.

Another thing to complain about is the pacing. In the “Pilot,” it plods along, seeming to take forever to get from one thing to the next. Perhaps it’s because there is lots of set up, but it just seems unnecessarily slow. We get that Vincent’s entire backstory won’t be explored in this first episode (though enough of it is to hook potentials fans), but does our introduction to him have to be so slow?

There are also more than a few blatant thefts from other projects. Vincent transforms into something beastly when his adrenaline ramps up, definitely reminiscent of The Hulk. The exterior New York shots could easily just be reused camera bits from Gossip Girl, which is the only logical reason why BEAUTY AND THE BEAST might be set in New York – to save money – as it doesn’t really make sense for the story. A shot of Vincent on a rooftop is definitely straight from Clark on Smallville. Catherine’s tough girl act, brought about by tragically losing her mother, is the same one that can be found on Castle and a dozen other shows currently running. Austin Basis plays Vincent’s best friend and roomie, J.T., exactly the same way he portrayed Math in Life Unexpected. Catherine’s partner, Tess (Nina Lisandrello), is a stereotypical New York detective, and could be in Blue Bloods.

And then, there are the plot holes and things that are just too shiny and perfect. Vincent is a doctor, and just wants to save people, completely selflessly. Catherine seems hurt by a guy doing her wrong, but immediately bounces back and is looking at other men. She is smart, capable, and always well above average pretty, even when on the job. The secret military organization that is supposed to be so tough and smart can’t find Vincent, and have no way to fight him when he does show up, even after years of hunting for him. Sure, some people believe he’s dead, but he’s dropped too many clues for that to be the general consensus from the authorities. And even if they are just finding out Vincent is alive, surely they’ve dealt with others like him.

One thing that I’ve heard many people complain about, though, that doesn’t deserve the scrutiny is that the Beast, Vincent, is good looking, yet still skulks in the shadows. This is completely explained by the fact that the military, which experimented with his DNA, is looking for him. It doesn’t matter how handsome he is, if he’s found out, he’s dead. Yes, when he’s not transformed, he is attractive. So what? That isn’t the point. He’s not hiding because he’s ashamed of a scar.

The remarkable thing that may be missed is that Vincent doesn’t hide well enough. He lives in a city with millions of people, surrounded by cameras. He is determined to help out those who need it, which results in Catherine connecting him to a bunch of past crimes. Why hasn’t he been found out yet? Why doesn’t he move somewhere rural, where there is far less chance of being caught? Why does he keep taking unnecessary risks even if, as he says, it makes him “feel human?” Wouldn’t you rather be alive?

The good thing about BEAUTY AND THE BEAST is the mythology. Some have complained that it’s predictable, too, but with so little of it leaking out yet, it’s hard to imagine how anyone can justifiably lobby that against the series. We know that Vincent was part of a government project after 9/11, during his time serving in Afghanistan. We know that Catherine’s mother being killed was not some random happenstance. And that’s about it.

There is also plenty of romance for the shipper fans. Kreuk and Ryan are easy on the eyes, and their characters are so virtuous that it’s easy to root for them. Catherine telling the boy at the beginning that she doesn’t care if he smokes weed shows that she knows the difference between laws that make sense and those that don’t, and doesn’t just blindly follow rules, making her even more sympathetic. They will find happiness with each other, and it’s plenty easy to see how that could be so.

BEAUTY AND THE BEAST is not groundbreaking or particularly original. But it’s not terrible, either. Depending on how the series develops, and the twists it decides to take, it could end up being something definitely worth watching. The CW is the perfect home for it, and gives the show its best chance of growing properly, finding its target audience, and not being reigned in unnecessarily. We’ll have to wait and see if that’s the case.

BEAUTY AND THE BEAST premieres this Thursday at 9 p.m. ET on the CW.