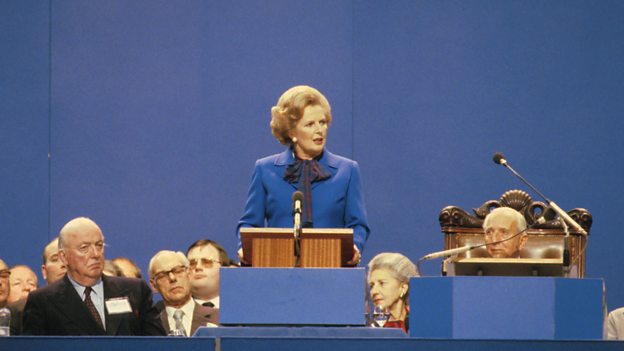 Marking 40 years since Britain’s first female prime minister rocketed to power in 1979, the BBC presents the defining story of Margaret Thatcher and of the era when she dominated the political and social landscape.

How did the small town girl from Grantham, a woman who said she would not see a female Prime Minister in her own lifetime, rip us out of the post-war consensus, and the chaos of the 1970s, and hurl us towards the opportunities, individualism, wealth, inequalities, global standing and dilemmas of the present day? And how has the public memory of her life and career led to a situation where she repeatedly tops opinion polls when ordinary British people are asked to name both our worst, and our greatest, post-war leader?

Through the prism of one woman’s rise and fall, this series charts the seismic social history of modern Britain. Vivid archive footage from the time – ranging from the violent and visceral to the intimate and unseen – will allow us both a deeply personal glimpse of this remarkable politician, and transport us to the heart of some of the most important formative events in Britain’s recent past.

We will hear from those closest to her (politicians, friends, adversaries, some of the defining faces of the time) and from the citizens from every corner of Britain whose lives would be altered forever by the powerful shifts she brought about. Together their evocative, personal and revealing firsthand testimony will combine to build a multi-layered perspective, both of Thatcher herself and of a nation undergoing epoch defining social and cultural change.

Patrick Holland, Controller of BBC Two, says: “Margaret Thatcher defined her age like no other leader since the war. This series promises to be not just the story of her extraordinary political journey, but also an exploration of the age that produced so much of the world we live in today. I am thrilled we will be bringing this most compelling, and divisive, of histories to BBC Two.”

Aysha Rafaele, Creative Director, The Documentary Unit, BBC Studios, says: “Whether we love it or hate it we all live in a world created by Margaret Thatcher. This new BBC Two series will explore how the ideology that she espoused and embodied came to be the defining narrative of the last 40 years and will take a forensic look at her impact and legacy on all corners and all aspects of British life.”

Deeply personal, genuinely revelatory; this epic, urgent and deeply human series seeks to reignite the debate around one of the most influential, but controversial political figures of our times.

Thatcher (w/t) 5×60′ has been commissioned by Patrick Holland, Controller of BBC Two and Tom McDonald, Head of Natural History and Specialist Factual. The Commissioning Editor is Simon Young. It is being produced by BBC Studios’ The Documentary Unit.