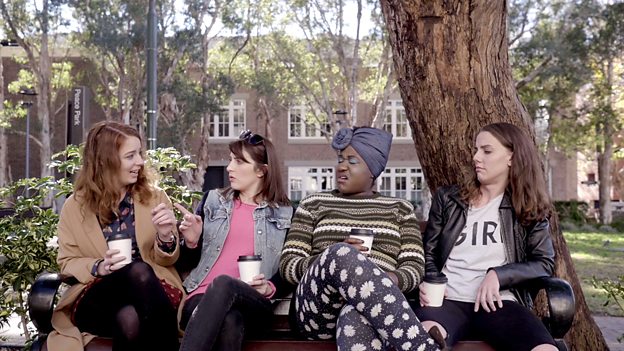 BBC Three will air new Australian comedy-drama series 600 Bottles of Wine, it was announced today. The four-part short form series was acquired from Escapade Media and will be available to watch on BBC Three from 10am on Sunday 27 May.

Based on Grace Rouvray’s popular blog, 600 Bottles Of Wine tells the story of Claire (played by Rouvray herself) who is flung back into the dating scene when she breaks up with her long-term boyfriend. When Claire has a one-night stand with advertising manager Pat (Angus McLaren) and feels a genuine connection that goes far beyond that, she turns to her friends to help establish where she stands in the relationship.

600 Bottles Of Wine looks at the ‘anti-relationship’, and what dating is like in a world where nobody ever says what they really mean or really want.

Sue Deeks, Head of BBC Programme Acquisition, says: “It’s a real pleasure to bring 600 Bottles of Wine to BBC Three. Grace Rouvray is a fantastic new voice and her fresh, funny series will be every bit as relatable and entertaining to audiences in the UK as in Australia.”

Jessica Stonehouse, Head of Sales for Escapade Media, adds: “We’re delighted to be working with the BBC to bring 600 Bottles Of Wine to the UK. BBC Three offers fresh and unique programming, making it the perfect home for this show which is a comic feast of friendship, sex and wine.”

Cockatoo Colab Producer Bec Bignell says: “The flexible nature of short-form content enabled us to repurpose the story in multiple formats to service different audience preferences on different platforms. We’re thrilled to debut our entrepreneurial labour of love on the exciting and progressive platform, BBC Three.”

600 Bottles Of Wine (4×18’) is produced by Cockatoo Colab’s Bec Bignell, directed by Ainslie Clouston and is written by Grace Rouvray. It was acquired for BBC Three by Damian Kavanagh, Channel Controller of BBC Three, and Sue Deeks, BBC Head of Programme Acquisition.