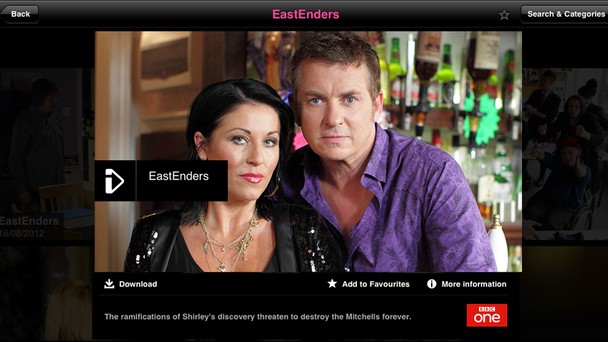 For the first time, the quality programmes on BBC iPlayer’s award-winning app are available wherever you want to watch them, whether or not you have a Wi-Fi or 3G signal. Watch on the underground, on planes, or any location where internet access is beyond your reach. Programmes downloaded from the UK can also be viewed abroad for up to 30 days, so you can take the BBC on holiday with you. Once you’ve pressed play, you can keep watching for seven more days.

The new mobile downloads feature is initially available on iPhone, iPad and iPod Touch devices and will come to Android devices soon.

There are three simple steps to transforming your journey:

With the option to add multiple programmes to download at the same time, your device could be full of enough of your favourite BBC TV shows to be entertained on a 10-hour flight, there and back.

This launch builds on BBC iPlayer’s strategy to move beyond the PC and make more quality BBC content available across mobile, tablet and internet connected TVs, delivering increased value to audiences. In July alone, there were 30m requests for BBC iPlayer TV programmes via a mobile or tablet, an increase of 142% year on year.

Daniel Danker, General Manager, Programmes and On-Demand for the BBC says, “With mobile downloads for BBC iPlayer, you can now load up your mobile phone or tablet with hours and hours of BBC television programmes, then watch them on the road, on the tube, on a plane, without worrying about having an internet connection or running up a mobile data bill. Viewers have up to 30 days to begin watching a downloaded programme, so you can even fill up your device and take the BBC with you on holiday.”

Launching on December 2007 as a simple catch-up website, BBC iPlayer has helped pioneer TV on demand by offering audiences the opportunity to watch selected TV programmes for up to 7 days after broadcast.

Variants of BBC iPlayer optimised for over 550 mobiles, tablets and connected TVs are also available, allowing audiences to catch-up or watch live wherever they are and on whatever device – offering access on the move over 3G and Wi-Fi , or simple and convenient access via broadband on the living room TV.