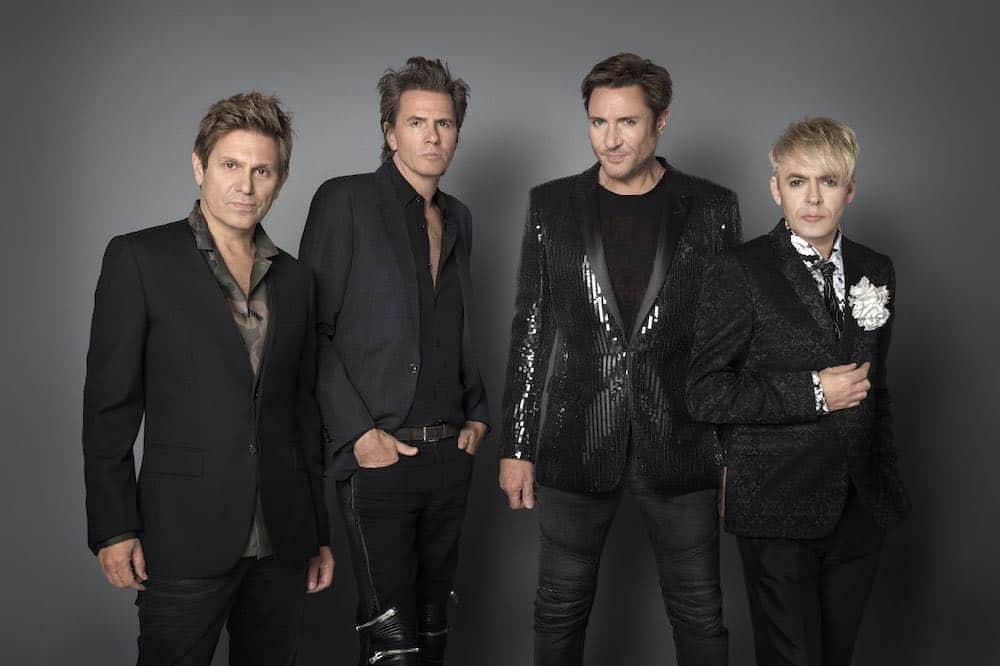 The iconic British rock band Duran Duran are set to take over BBC Four on Friday 29 June from 9pm. With exclusive access to the band, the night of programming features two newly-filmed documentaries which showcase incredible insights, previously unseen archive footage and rare demo tapes, as well as the group’s thoughts and inspirations across the decades since they first formed in 1978 in Birmingham.
In Duran Duran: There’s Something You Should Know (9-10pm) Back2back Productions has been granted exclusive access to the legendary group. Simon Le Bon, Nick Rhodes, John Taylor and Roger Taylor open up about their extraordinary career, talking more candidly than ever before about the highs and lows they have endured together over the years.

Duran Duran: A Night In (10pm-11pm) sees the group talking about their early inspirations, as they look back together at the television programmes, music and film that they grew up on from the 60s, 70s and 80s.

Bassist John Taylor says: “Without the BBC, there would be no Duran Duran. Forty years ago this October, the BBC first aired Barbarella. It was while watching that late-night screening of the Jane Fonda sci-fi epic that members of a burgeoning Birmingham post-punk band decided the name of one of the films characters – Durand Durand – would make for a cool and unusual band name.

“The BBC provided us with a constant stream of the best contemporary music throughout the ’70s, just when we were coming of age and finding ourselves as individuals and future artists. Everybody who was anybody went through the doors of Top Of The Pops and The Old Grey Whistle Test, and we were there soaking it all in, so it is with great pleasure we present our curated night of music on BBC Four this coming June 29. These documentaries and clips have allowed us to explore the origins of the band through personal experiences and cultural touchstones. Even the savviest fans will find surprises.”

Jan Younghusband, Head of Commissioning for BBC Music, says: “Duran Duran have remained one of the world’s most influential and successful bands across the last four decades, starting off in the early 80s as an alternative group who embraced the New Romantic era. Fusing fashion, design, art and technology with timeless music they have continued to captured the hearts of millions around the world across several generations. As the home of music on BBC Television, I’m thrilled that BBC Four is celebrating this unique group with a night of exclusive programming.”

Programme Information
Duran Duran: There’s Something You Should Know
Duran Duran are one of the UK’s greatest and most enduring pop bands of all time. In the space of four years, five lads with one dream became the biggest band in the world. They went from playing at the Rum Runner, a small new wave nightclub in Birmingham, to filling Japan’s Budokan stadium, and arenas around the world. But this extraordinary success came at a price when, in 1985, the band imploded, the tolls of excess on all fronts took over and creative differences caused them to fracture.

Charting their trajectory since they formed, the story is told through seven of their 14 groundbreaking albums – each one uncovering a compelling chapter in the band’s journey: the fame, the fortune, the meltdowns, the hits, the misses, the iconic videos, the tours, the fans, the partying and the supermodels. With intimate access to each band member, and previously unseen archive footage, the documentary reveals how their meteoric rise to fame at such a young age affected each of them and how they have reclaimed their seat at the table with rock royalty.

It is a story of survival. Four decades on and the band are still getting Top 10 hits. In 2016, their 14th studio album, Paper Gods, co-produced by Mark Ronson, Nile Rodgers and Mr Hudson, and featuring soul pop sensation Janelle Monae – was critically acclaimed worldwide, not just by fans, but by fellow musicians, artists and the music industry. The film looks at how they survived this incredible journey and how they still compete in today’s cut-throat pop business.

Back2back Executive Producer/MD David Notman-Watt says: “Duran Duran are still standing where so many of their peers have fallen by the wayside. Revealing, surprising, and at times shocking, this documentary lifts the lid on the real story of one of the truly great British bands.”

Duran Duran: A Night In
In this hour-long documentary from Back2Back Productions, viewers join Simon, Nick, John and Roger as they sit back to watch and talk through personally selected clips of archive television, music shows, movies, performances, adverts and children’s shows that have inspired them across their career. The clips trigger memories and stories that are as surprising to the other band members as they will be to viewers at home.

Taylor and his three bandmates took great pains in selecting choice cuts from the BBC archive that would best represent their experiences and interests growing up.

“There was just so much to choose from, we could have programmed hours of music,” says John Taylor.

In an exclusive interview, they discuss their influences from the worlds of film and art, referencing Blade Runner, Andy Warhol and Tomorrow’s World. From Barbarella in ‘68 to Patti Smith’s Horses in ’76, David Bailey on Andy Warhol in ‘73 to Prince’s Kiss in ’86 and Roxy Music’s Virginia Plain in ‘72 to Midnight Express in ‘78. A Night In is a trip down memory lane with the band as they remember the shows that capture a particular moment in their creative lives. There’s even a moment for Roobarb And Custard!

With more than 100 million records sold, 18 American hit singles and 30 UK top 20 songs, Duran Duran have won Grammy, Ivor Novello, Brit, Q, BPI, Silver Clef and MTV Music Video Awards (amongst others) and were inducted into the Hollywood Walk of Fame in 1993. Their name famously comes from the character Dr. Durand Durand in the film Barbarella.

Duran Duran: There’s Something You Should Know and Duran Duran: A Night In have been ordered by Cassian Harrison, Channel Editor of BBC Four, commissioned by Jan Younghusband, Head of Commissioning for BBC Music. Commissioning Editor for the BBC is Emma Cahusac. Executive producer for Back2back Productions is David Notman-Watt, producer/director is Zoe Dobson.