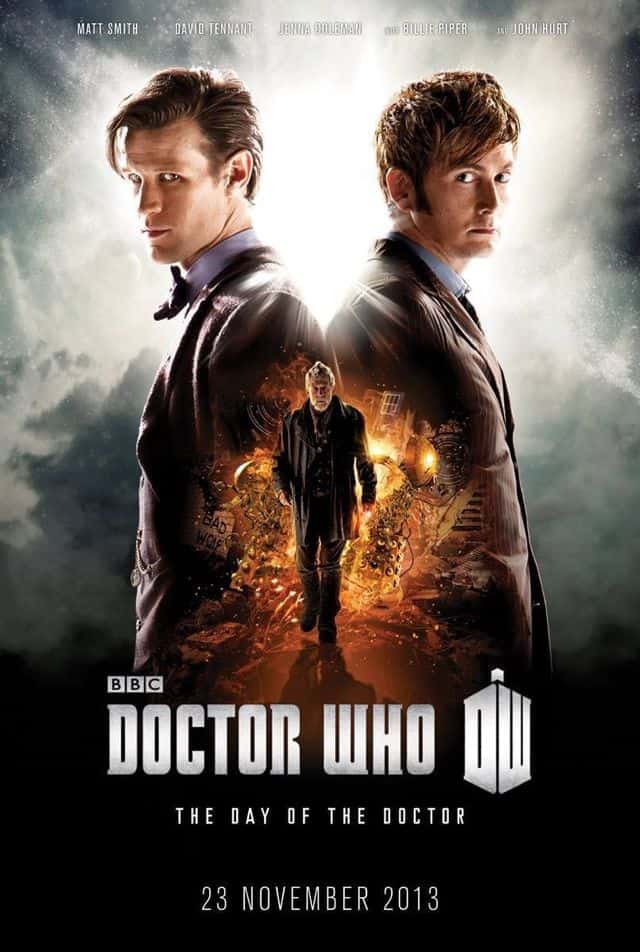 Announced today, BBC AMERICA will simulcast the Doctor Who 50th Anniversary Special, The Day of the Doctor, in the U.S. on November 23, 2013. For the first time ever, the world’s longest running and most successful sci-fi series will be broadcast simultaneously to millions of viewers worldwide in a global simulcast.

From the U.S. to the UK, Canada to Colombia, Brazil to Botswana and Myanmar to Mexico, fans in at least 75 countries spanning six continents will be able to enjoy the episode at the same time as the UK, with more countries expected to be confirmed within the next month. The one-off special stars Matt Smith (the Eleventh Doctor), Jenna Coleman (companion Clara), David Tennant (the Tenth Doctor) with Billie Piper and John Hurt.

In addition, BBC AMERICA will be dedicating an entire week to Doctor Who in November, including the new film An Adventure in Space and Time, marathons and new specials to be announced.

On top of the worldwide TV broadcast, BBC AMERICA will announce in the coming weeks details of select 3D screenings of the anniversary episode in theatres in the U.S.

“Few TV shows can still lay claim to being appointment viewing but Doctor Who takes this to another level. In its 50th Anniversary year we wanted to create a truly international event for Doctor Who fans in as many countries as possible and the simultaneous broadcast and cinema screening of the special across so many countries will make for a fitting birthday tribute to our Time Lord,” states Tim Davie, CEO of BBC Worldwide.

Steven Moffat, Showrunner for Doctor Who and Executive Producer of the 50th Anniversary episode adds: “The Doctor has always been a time traveller – now he’s travelling time zones. On the 23rd of November, it won’t be the bad guys conquering the Earth – everywhere it will be The Day of the Doctor!”

In London, birthplace of the iconic series, the 50th Anniversary weekend will also see over 20,000 fans gather at the ExCel exhibition and convention centre for the official celebration event which will feature appearances from cast old and new including Matt Smith and former Doctors Sylvester McCoy, Colin Baker and Tom Baker.

Doctor Who is BBC AMERICA’s highest rated series. Since 1963, Doctor Who has been one of the best loved dramas and certified by the Guinness Book of World Records as the most successful sci-fi series ever.  The show has received numerous awards across its 50 years and has seen huge commercial success with over 10 million DVDs and 8 million action figures sold globally.  BBC Worldwide, the commercial arm of the UK broadcaster distributes Doctor Who to over 200 territories across the world.