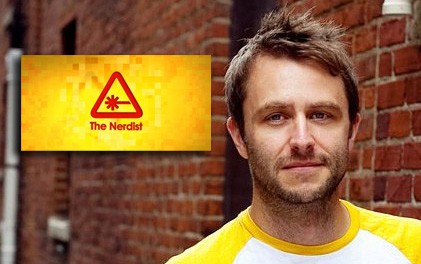 BBC AMERICA’s General Manager Perry Simon today ordered a full season of The Nerdist, a comedy-variety talk show based on comedian, writer, Doctor Who evangelist and web pundit Chris Hardwick’s hit Nerdist Podcast. The season will premiere in Spring 2013 as part of the channel’s signature Supernatural Saturday programming block, also home to Doctor Who, Being Human and new original series Orphan Black. Along with The Nerdist series, Chris Hardwick will be fronting the entire Supernatural Saturday programming block in the spring.

The Nerdist will continue to be produced by Nerdist Industries and Comcast Entertainment Studios, with Chris Hardwick, Alex Murray, Jay James, Gary Snegaroff and K.P. Anderson serving as executive producers.

The (10×60) series pick-up follows a collection of specials pegged to pop culture events throughout 2012. Matt Mira and Jonah Ray, Chris’s partners in the Nerdist Podcast, will return as contributors. The Nerdist series will be shot in Los Angeles on a brand-new set and will feature celebrity guests, UK and US-based correspondents as well as stand-up and musical performances.

Perry Simon, General Manager, Channels, BBC Worldwide America says: “We could not be more pleased to be expanding our relationship with Chris by ordering The Nerdist series with an exciting new format, as well as having Chris host our Supernatural Saturday block. Ever since early 2011, Chris has brought his loyal legion of fans to BBC AMERICA through his successful Nerdist specials and, as America’s #1 Doctor Who fan, hosting countless Doctor Who-related events for our channel.”

Chris Hardwick says: “As a huge fanboy of nerd culture stuff, we at the Nerdist Podcast gush about the things we love constantly, and the fact that BBCA lets us do that AS OUR JOBS puts me forever in their debt. They have been exceptional at allowing us to grow the show and its audience. Plus, I’ve met THREE Doctors since I started working there. Perry Simon doesn’t know this yet, but I’m going to hug him REALLY HARD next time I see him-until it gets awkward. Six extra seconds oughta do it.”

The Nerdist Podcast, named one of the best comedy podcasts by Rolling Stone, is a top 10 comedy podcast on iTunes and has featured guests from Tom Hanks and Baratunde Thurston to Tina Fey and Matt Smith to Judd Apatow.

Chris is a professional stand-up comedian and a self-proclaimed nerd. He is a writer for Wired Magazine and is the face of AMC’s first live after show Talking Dead, which airs as a platform to discuss the network’s highly rated show The Walking Dead. Chris is also the founder of Nerdist, a website and podcast devoted to all things nerd related, and in 2011 merged with GeekChicDaily to form Nerdist Industries with Hardwick serving as Founder & Chief Creative Officer. This year Chris was featured in a one hour stand-up special “Chris Hardwick: Mandroid” on Comedy Central. Chris is on Twitter @nerdist.