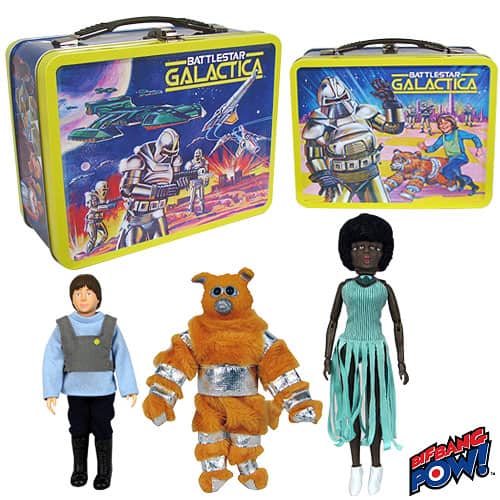 Entertainment Earth Convention Exclusive! When the folks at Bif Bang Pow! wanted to come up with a fantastic Battlestar Galactica 35th Anniversary item, they could only think of one thing – that ridiculously retro lunchbox they had when they were kids in 1978. They bought an old rusted one off of eBay, scanned it, painstakingly touched it up, and updated it for today. Now totally cool again and completely licensed, this sensational Battlestar Galactica Tin Tote measures approximately 8 5/8-inches wide x 6 3/4-inches tall x 4-inches deep. It presents stylized images from the 1978 BSG pilot episode “Saga of a Star World,” and the best part is that it contains three exclusive 8-inch scale, retro-styled EMCE action figures of the same characters shown on the box: Boxey, Muffit, and a Tucana Singer. A limited edition of just 1,500 pieces, the Battlestar Galactica Retro Tin Tote Gift Set belongs at your house! Ages 14 and up.

Direct from the 1978 science-fiction television series Battlestar Galactica, these 8-inch scale action figures feature multiple points of articulation, episode-specific fabric clothing, and a retro style reminiscent of the bestselling “Mego” action figures of the 1970s and 1980s. Fan-favorite Boxey stands about 6-inches tall and is dressed in a blue shirt, vest, and pants. Isn’t he adorable? Good ol’ Muffit measures approximately 5 1/2-inches tall in his “fur” suit with metallic-silver vinyl details, and the 4-eyed, 2-mouthed Tucana Singer stands tall at 8-inches in her shiny turquoise-colored dress and matching beaded collar!

In the 1978 BSG pilot episode “Saga of a Star World,” Starbuck and Boomer encounter a species of Tucana singers on Carillon. These humanoid beings are 4-eyed and 2-mouthed, with the lower mouth able to generate a powerful low pitch capable of breaking glass.

Battlestar Galactica (BSG) is an immensely popular franchise of television series and sci-fi films, the first of which aired in 1978. Books, comic books, and video games followed. In Battlestar Galactica, The Twelve Colonies – a civilization of human beings in a far-off sector of the universe – are at war with the cybernetic Cylons. The Cylons lay waste to The Colonies, decimating their worlds and populations, and the survivors flee aboard any spacecraft they can find, including the Battlestar Galactica, the only military ship in the Colonial Fleet to survive the Cylon attack. Battlestar Galactica’s renowned commander and his crew then lead the ragtag flotilla of survivors in search of a new home, the mythical planet Earth.