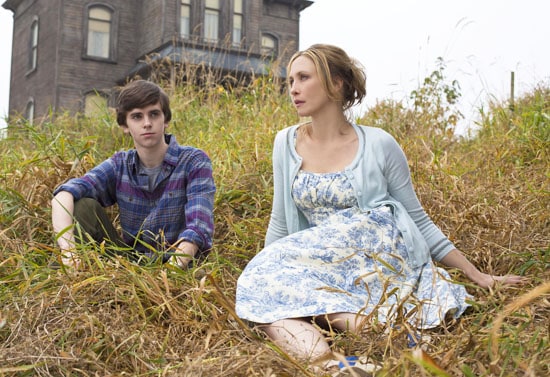 A&E Network will premiere the new original scripted drama series “Bates Motel” from executive producers Carlton Cuse (“Lost”) and Kerry Ehrin (“Friday Night Lights”) on Monday, March 18 at 10 PM ET/PT, it was announced today by Bob DeBitetto, President and GM of A&E Network and Bio Channel. “Bates Motel” is a contemporary prequel to the genre-defining film “Psycho,” and promises to give viewers an intimate portrayal of how Norman Bates’ psyche unravels through his teenage years. Fans will have access to the dark, twisted backstory of Norman Bates and how deeply intricate his relationship with his mother, Norma, truly is. The series stars Academy Award nominee Vera Farmiga (“Up in the Air,” “The Departed”), Freddie Highmore (“Charlie and the Chocolate Factory,” “Finding Neverland”), Max Thieriot (“Disconnect”), Olivia Cooke (“Blackout”) and Nicola Peltz (“The Last Airbender”). Season one also co-stars Nestor Carbonell (“Lost,” “The Dark Knight Rises”) and Mike Vogel (“Pan Am”).

“Carlton and Kerry crafted a fascinating backstory for Norman and Norma Bates that has been brought to life by this incredible cast,” said DeBitetto. “It’s thought provoking television at its finest and we’re thrilled to bring it to the A&E family.”