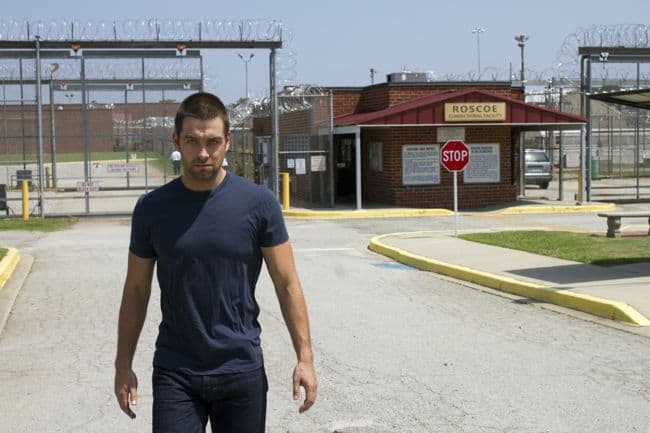 CINEMAX premieres a new series this Friday, January 11th at 10 p.m. Entitled BANSHEE, the show sees a man (Antony Starr, Outrageous Fortune) get out of prison after fifteen years served for thievery. Hs tracks down his partner in crime to get his fair share from the robbery that put him behind bars, only to find that she has assumed a new identity as upstanding citizen Carrie Hopewell (Ivana Milicevic, Casiono Royale), has a family, and says that their take is long gone.

What’s a directionless guy to do in a situation like that? Drink, of course. But as he sits in Sugar Bates’ (Frankie Faison, The Wire) bar, he is drawn into a conflict that results in the death of the new sheriff. Since no one has yet seen this sheriff, and the mysterious protagonist has no where else to go, he assumes the identity of Lucas Hood, law man of the town of Banshee.

The first half of the pilot is exactly what one might expect from a Cinemax series. There is lots of action, gratuitous nudity, and gruesome injury. It’s the typical high-octane thriller, set on the small screen, rather than the big. For those tuning in just for this type of thing, the series will definitely deliver.

But as the episode plays out, BANSHEE begins to take on more of a Justified feel, a definite good thing. The man now known as Hood may be a criminal, but he has some type of moral code. He is good to Bates, and there isn’t any sense that he is a threat to Carrie. He sticks his nose in where it doesn’t belong, but only to defend those who need defending.

The town on Banshee has plenty of problems for Hood to solve. It is practically run by the ruthless Kai Proctor (Ulrich Thomsen, Hitman), who owns a slaughterhouse, and is from an Amish family. He will be good to you if you do what he wants, and he does have affection for his father, who still lives by the old ways. But he’s not trustworthy, is a control-hungry, perverse S.O.B., and he certainly doesn’t have the public’s best interests at heart.

This sets up a typical hero story. Hood will try to clean out the corruption, while also dodging his past, which threatens to come back to haunt him. He has to deal with his new police department, especially senior office Brock (Matt Servitto, The Sopranos), who had expected to take over, and Hood has also awakened old feelings in Carrie, whose daughter, Deva (Ryann Shane, Lights Out), is probably his. So there’s a lot pulling the lead character in many directions, but we’re sure he will handle it all and do the right thing. He has to, right?

Unfortunately, this leaves a number of pilot holes. For instance, where did Hood get this sense of right and wrong? Are we expected to believe that his misdoings were in the Robin Hood vein, only stealing from those who deserve it? What would motivate a guy like that to get involved in the going-ons of a small town he knows nothing about? No good reason is given.

More importantly, how can our main character get away with becoming Lucas Hood? No one in Banshee may have met Hood yet, as he is hired remotely, but that doesn’t mean they’ve never seen him. Surely, any background check run would have included viewing pictures of the man? While the new Hood does have his friend Job (Hoon Lee, Premium Rush) work his magic on the web, isn’t this too little, too late? And how long before Hood’s family or friends come to check up on him, or google search Hood’s name to see the new face?

The cast is good. I have no complaints about any of them, who all seem fully invested, and sell their parts just fine. Starr is appropriately brooding, while Thomsen can send chills down one’s spine with the best of them. Sexy Milicevic, thankfully, actually seems like more than just eye candy, and Faison and Lee could be more than sidekicks, if the story ever calls for them to be, which it probably won’t.

Cast doesn’t matter as much, though, when it seems like BANSHEE is willing to put thrills ahead of story. That’s a shame, considering there are enough interesting elements here to build something on. That’s where it parts ways from Justified, which has the same sort of bad-boy protagonist and Western style, but relies more on believable twists that make sense and enriching back story, rather than excuses to shove steak sauce bottles into someone’s head. Maybe this is what Cinemax viewers want; the network is known for its action. But it’s not what a discerning TV viewer wants, and when it’s possible to have both, it’s a shame that the execution doesn’t quite cut it.