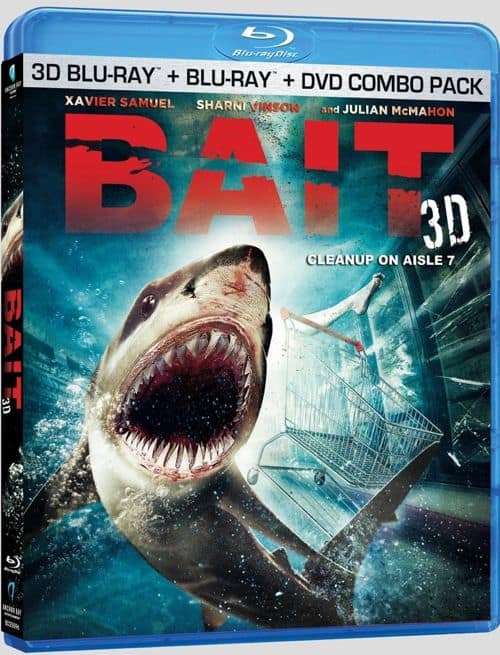 Seat42f and Anchor Bay Films have teamed up to give THREE lucky winners a copy of BAIT 3D on BLURAY. For a chance to win leave a comment below telling us why you want to add BAIT 3D to your BLURAY collection. Only one entry per person. Contest ends September 25th. Winners will be notified on September 26th via email so make sure to use a valid email address when you post your comment.

Anchor Bay Films announces the September 18th release of BAIT 3D on DVD, Blu-ray™ and Blu-ray + DVD Combo Pack. Natively shot in 3D, and filled with terrifying special effects and blood-thirsty great white sharks, Bait 3D a fun and action-packed thrill ride. SPR is $29.99 for the Blu-ray™ 3D, Blu-ray™ and DVD combo, and $24.98 for the DVD. Special features include a gallery of original production storyboards. Pre-book is August 16th.

This intense 3D thriller tells the story of a group of survivors in a sleepy beach town who suddenly find themselves trapped inside a submerged supermarket, following a freak tsunami.  As they try to escape to safety, they soon discover that there is a predator among them more deadly than the threat of drowning—vicious great white sharks lurking in the water, hungry for fresh meat. As the bloodthirsty sharks begin to pick the survivors off one by one, the group realizes that they must work together to find a way out without being eaten alive.