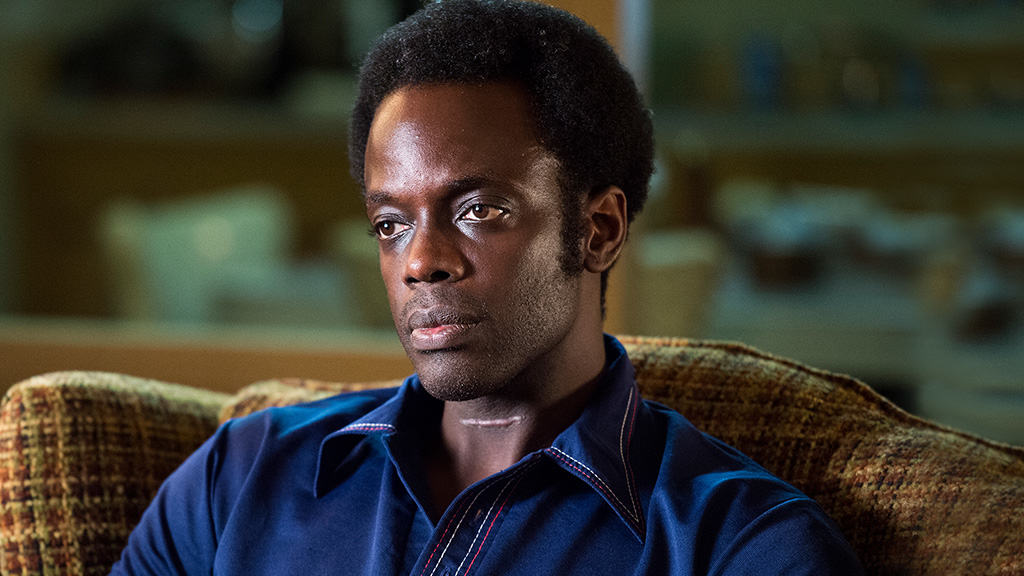 HBO’s examination of the ’70s rock scene Vinyl only gets more addictive with each passing episode, and Ato Essandoh’s Lester is a huge part of the series’ appeal. Essandoh, who has previously appeared in everything from Elementary to Django Unchained, infuses Lester with a passion and anger that radiates in every scene of his performance. Lester’s music career was cut short thanks to a brutal beating that occurred after his business partner Richie (Bobby Cannavale) cut him loose in the ’60s. Now Lester is back in business with Richie and trying to decide if their friendship can be repaired or if he should seek revenge.

Essandoh has made such an impression on the music community that he recently took to the stage to play with Miss Velvet at the South by South West festival. It is clear Essandoh is loving every minute of his Vinyl experience. The talented actor recently spoke with Seat42F about the tragic nature of Lester as a character, his lifelong love of music, and why being on Vinyl is like living out his dreams in real life.

Richie and Lester have an incredibly volatile relationship. What can we expect from them moving forward?

Essandoh: I think moving forward is them trying to work that out in some way, shape, or form. I think what is sort of beautiful and tragic about Richie and Lester is that they met on terms of music and friendship, and that’s what they built their bond on, so I feel it is a true friendship rather than necessarily Richie being a callous opportunist. So how do you find yourself in a better place after such a betrayal as what happened between Richie and Lester?

What is Lester hoping to achieve by managing The Nasty Bits?

Essandoh: I think it starts out as revenge, like, “I’m going to screw you over like you screwed me over,” but I think as we saw a little bit in this past episode, you are dealing with other people’s lives now. If you truly want to screw Richie over, you probably have to screw The Nasty Bits over as well, and is that fair? Is that how you want to represent yourself, if that is what Lester decides to do? I think it was a very significant scene where Richie had to fire Duck, the lead guitarist in The Nasty Bits band. What Lester is learning is that there is a necessary ugliness to this business that if you want to be a part of this business you have to participate in.

How do you see Lester?

Essandoh:I think that Lester starts off in the series as the consummate, pure musician, and innocently so. As he says in the pilot, he just wants to play the Blues. I don’t think he is aware, or allows himself to be aware of, the necessary things he might have to do, that he might not like, but that he still has to participate in if he wants to achieve his dream. Which is what anybody would have to do in any kind of business – I mean, I don’t like memorizing lines, for example, but if I don’t memorize lines, I can’t actually do the part I need to do, so there are things I need to be able to do in order to achieve what my dreams are.

And Lester, yeah, sometimes you are going to have to sing music that you don’t like and that will allow you to build an audience and have the power to potentially go back and do the music that you do like. I think that is the tragic flaw in Lester, that there is maybe a little too much pride and that is going up against Richie’s voracious need to achieve in this business. Those two things going at each other are what Lester has to deal with right now.

Is there a moment or scene that you think defines Lester more than others?

Essandoh: I would say there are two Lesters we are dealing with now. Luckily, as an actor I’ve gotten the opportunity to play a pretty full arc in just the first episode where you see Lester prior to losing his voice and then Lester post that. The defining moment for Lester for me is when he is sitting with Richie and Paul Ben-Victor’s character and they are talking about making him into Little Jimmy Little, and Lester is so innocent, he just doesn’t see the future enough.

Prior to that, I think the scene is when Richie comes to Lester with Lester’s old music and says, “Hey, we can get the old band together and start this music.” Lester is now so embittered he cannot face his old self and his old voice, and he can’t movie on. That’s what we will hopefully see in the seasons to come.

Did you research the ’70s music scene after you got the role?

Essandoh: There was a lot of stuff I already knew. It’s funny that I am working for one of The Rolling Stones because The Stones were one of the first concerts I went to as a person who could make his own decisions about what concerts to go to and go with his friends. I saw them a few years ago in Toronto, so I have seen the Stones play a bunch, and they are one of my favorite bands. To suddenly be working for them out of the blue – yeah. I just went into my record collection and listened to a bunch of the music I had already been listening to.

I’m a huge Jimi Hendrix fan, and I’m also a huge fan of Parliament-Funkadelic and all this stuff that was happening then. I still remember significant moments in my life where I heard a Jimi Hendrix record for the first time or a Blues record for the first time. I will never forget that stuff and now suddenly this is my job. I’m pretending to be one of these people, so I didn’t have to do much research.

The music I wasn’t really aware of was the more punk rock scene. It was music I was aware of, but not really into, and a lot of the glam rock stuff, I wasn’t really into growing up. Now that the show is on and I am being exposed to that kind of stuff I am becoming a New York Dolls fan because I love the rendition of that song “Personality” that they had in the pilot. Now I can’t stop listening to that song.

Lester isn’t based on a real person, but are there any artists you looked to for inspiration when you go this role?

That’s what I thought was important not for me personally, but honestly for the story. At least in my opinion, the entire series of Vinyl, this whole story happens because Richie’s character discovers Lester playing music in a bar and then he takes it upon himself to say I’m going to bring you into the music business. I think as an actor I need to fulfill what that Richie character is looking at. So if you are not looking at someone who you think could have been Chuck Berry then the whole raison d’être for Richie going into the music business falls apart.

Are you as passionate about Blues as Lester is?

Essandoh: I grew up listening to that music: Blues, Jazz, and also Classic Rock, and hip hop and soul. I have three to four hundred records, and I have tons of MP3s and I still have CDs. Music is something I have always loved, so it is very serendipitous that I am in a show where I play someone who is a music head. I don’t know how stuff like that happens but it is a role that I am relishing more than any other role I have ever had.

What is it like working with a creative team like Martin Scorsese, Mick Jagger, and Terence Winter?

Martin is a consummate, savant level storyteller and he knows everything about music from back in those days, and he knows every obscure film, so he sits there and tells you these stories and you get this PHD level of knowledge from this man who is just telling you a simple story about a movie he did, and that also helps you see what he wants from the story from an actor’s standpoint. It’s a dream come true and I am really lucky to be a part of this.

And of course, Mick Jagger comes to set every once and awhile and he walks in and I’m like, It’s Mick Jagger!

Is there a story or moment from the ’70s music scene you would like to see play out in some way on Vinyl?

Essandoh: We are already kind of doing it, or at least introduced the seed of it. I am a big hip hop fan and I would love to see how the proto hip hop scene was created. Hip hop is something I remember being introduced to in the early ’80s and I still remember hearing Run DMC for the first time, so seeing how that came about would be very interesting to me.

What is your favorite Scorsese film?

Essandoh: Goodfellas, Raging Bull, Taxi Driver – those are the three right there. Goodfellas is a movie I will watch when they put it on TBS at three o’clock in the morning even when they ruin the movie by throwing in a commercial in the middle. I will still watch it with the bleeping out of all the curses and that stuff. I absolutely love that movie.

Then Raging Bull and Taxi Driver are kind of like my really cherished vinyl records. You have to set aside time to watch, it is like my Miles Davis Bitches Brew record, right? You can’t just pop that record on and do the dishes. You have to sit down, put the record on, put the lights in a certain way and listen to that record in its entirety, and that is what Raging Bull is like for me.